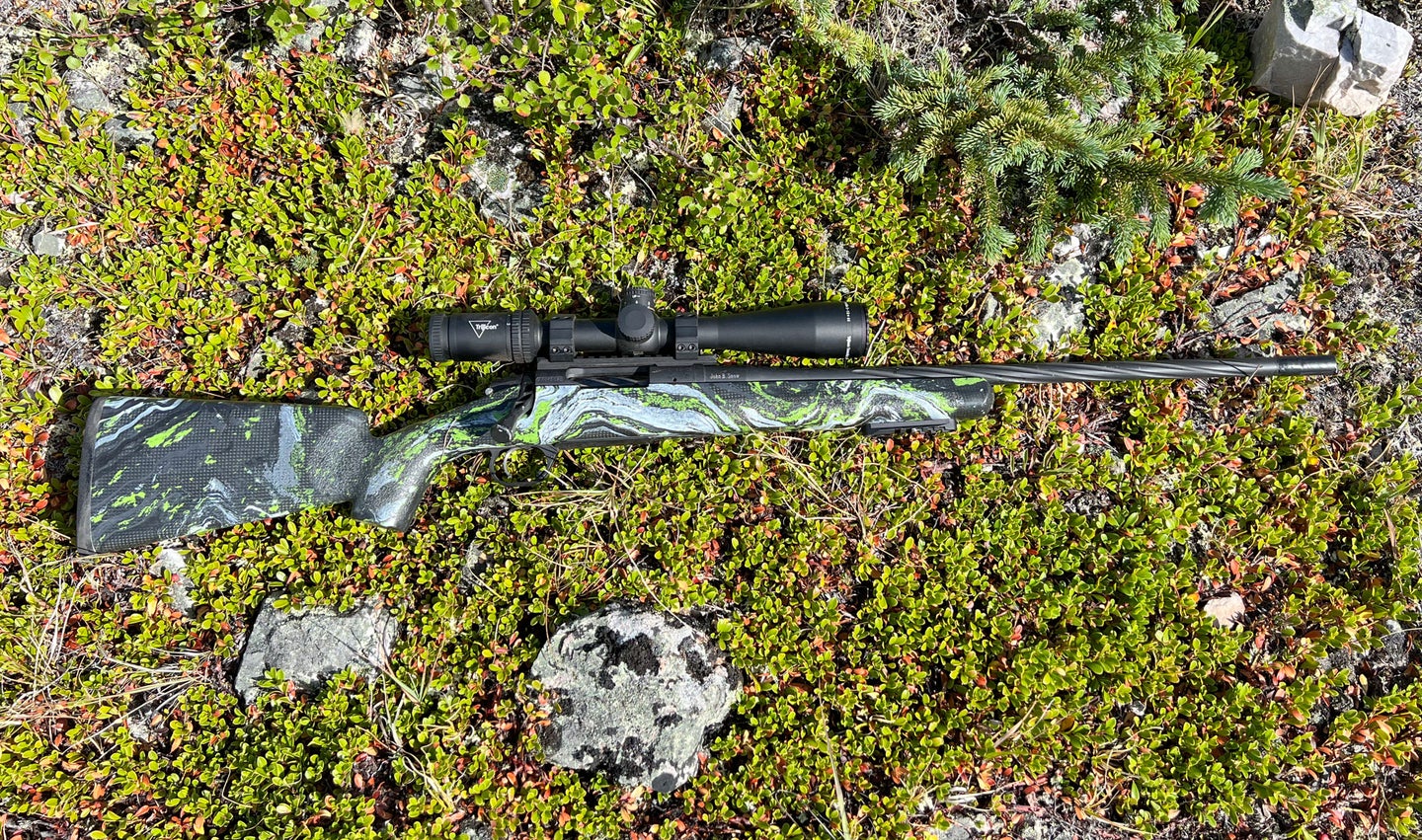 The author's Allterra Arms Mountain Shadow Steel in the Canadian Rockies during a bighorn sheep hunt. John B. Snow
SHARE

Maybe I’ve become jaded, but the term “custom rifle” doesn’t excite me the way it once did. Anymore, custom rifles resemble Legos, with gun makers buying actions from one place, barrels from another, and stocks from somewhere else. They screw them together, slap their name on the receiver, and call it Christmas. Allterra Arms, a small but growing firearms maker based out of Boise, Idaho, is not one of these companies.

The craftsmen at Allterra Arms build rifles on their own actions and stocks, and while they do source barrels from outside vendors, they do the chambering and threading themselves to create top-notch hunting tools that deliver excellent accuracy and performance, along with a level of customer support befitting a custom rifle shop.

Allterra currently offers five different platforms for their builds. I have one of their Mountain Shadow Steel rifles, a compact and lightweight bolt-action designed for hunters who cover a lot of country on foot.

The rifle weighs 6 pounds 13 ounces, not exactly an ultralight rig, but certainly portable, especially if you don’t mount an overly heavy scope on its Picatinny rail. Their lightest rifle, the Mountain Shadow Carbon, is similar to mine but has a carbon-fiber barrel that shaves about half a pound off the base weight. At the upper end of the weight scale is the Arid 1760, a stouter precision rifle that weighs about 9 pounds empty and unscoped.

Common to all these rifles is Allterra Arms Convergence action, a receiver they designed in-house. It is a two-lug bolt action with a couple interesting innovations meant to enhance accuracy.

Allterra Arms lumps these innovations under the phrase “bolt-to-bore alignment” on their website and even though that might sound like marketing fluff it is an apt description of what they’ve accomplished.

When you examine the bolt body on an Allterra Arms rifle, you’ll notice wear marks forming a ring around the circumference of the bolt about three quarters of an inch in front of the bolt handle. That ring corresponds to a raised section on the bolt body with a slightly larger diameter.

That raised ring engages the inside of the raceway when the bolt is closed, giving support to the rear of the bolt. Coupled with the support from the lugs at the front of the action this keeps the bolt aligned within the action and with the barrel. The advantages of this are fairly obvious.

One way to envision an accurate rifle is to picture a straight line running down the middle of the rifle barrel. You want every component of our imaginary rifle to be aligned with that line. This starts with the barrel. We want the bore to perfectly follow that line. The chamber should be cut so that it is symmetrical to the line too. We want the bolt to be positioned with the middle of the bolt face—represented by the firing pin hole—centered on that line as well. The bolt face should be at a perfect 90-degree angle to the line, and so on.

With the entirety of our rifle built around this line, we can position the cartridge perfectly with respect to the bore. Assuming the bullet is seated in the case with no tilt—or “runout” to be technical—we have created flawless bullet-to-bore alignment.

If there’s a recipe for accuracy, this is it—and every gun maker strives for this (or they should) when building a rifle.

The other interesting innovation in the Convergence is how they machined the barrel to be supported by two shoulder surfaces in the receiver. Normally, barrels have one flat surface at the rear—aka the shoulder—that butts up against a flat in the receiver when it is screwed in. The Convergence has a second flat just in front of the threads on the barrel that mates up with a corresponding shelf in the action. This “dual lock barrel seat,” as Allterra calls it, helps stiffen the connection between the barrel and action, which helps with accuracy.

Allterra threads their barrels 20 lines-per-inch (lpi), rather than 16 lpi, which is the standard for Remington 700 clone actions. That finer thread pitch allows for better tolerance control with headspacing and other dimensions.

Allterra machines its action from a 2-inch diameter bar of 416 stainless, allowing them to incorporate an integral recoil lug. Rather than drilling out the center of the action and then using a broach to form the raceway, Allterra uses a more precise EDM system to hold tighter tolerances.

The bolt and bolt handle are also machined from a single piece of bar stock, though the bolt knob is threaded on and can be replaced, which is a good thing as mine has gotten pretty beat up during the hunts I’ve taken it on.

When you look under the hood of the Allterra system you can tell that it was designed by performance obsessed ballistic nerds. Take the firing pin, for instance. Allterra uses a thicker firing pin which they add flutes to. What’s the point of going with a heavier firing pin, only to machine the weight back down to normal? The thicker diameter prevents the firing pin spring from bunching up and “snaking” which can drag on the pin leading to longer lock times—the time it takes the firing pin to strike the primer after the trigger releases.

Another example is the shape of the bolt lugs, which have a conical profile that creates a high spot on their outer surface. These high points (one on each lug) create defined points of contact in the barrel recess to keep the bolt head centered in the barrel.

Like many gun makers, Allterra Arms backs their products with an accuracy guarantee. With quality factory ammo they say their rifles will produce three-shot half-inch groups. While the value of 3-shot groups versus 5-shot groups is debatable, most rifle and barrel makers are offering some accuracy guarantee and Allterra is setting a high standard with ½ MOA performance.

My rifle, chambered in 6.5 PRC, turned out 3-shot groups that met that mark, but the majority of my shooting was with 5-shot groups. Because I planned to hunt with the rifle—rather than just ring steel—I mostly shot Hornady’s 143-grain ELD-X factory load.

On average, groups from my Mountain Shadow Steel measured .752 inches. This includes groups shot with the muzzle brake that came with the rifle and a couple suppressors I ran on it as well.

For a light hunting rifle with a sporter-weight barrel that’s also fluted this level of accuracy is quite good. And while I punched a fair bit of paper with the rifle, I shot it mostly at distance on small targets to get it dialed in for hunting.

Under practical field conditions, the rifle had no trouble making consistent hits (meaning 90 percent or better) out to 600 yards on vital-zone sized plates, and was solid at 800 yards as well.

Allterra touts how well their rifles handle. Allterra’s stock design includes a negative comb, meaning the cheekpiece is higher at the recoil pad than at the grip. Weatherby popularized this profile decades ago, as it reduces the amount of cheek slap a shooter experiences during recoil making the rifle more comfortable to shoot while lessening the likelihood of developing a flinch.

The fore-end is fairly wide, providing a lot of surface for the lead hand to grip. The stock also has texture molded in along the fore-end and at the grip for a secure hold. The angle of the grip positions the trigger finger correctly with respect to the face of the trigger, helping with trigger control.

The stock has a raised cheek-piece as well, giving the shooter’s face a solid anchor when mounting the rifle.

All together, these elements add up to a stock that comes to the shoulder with assurance, balances well between the hands, and gives the shooter a lot of control. It’s a smart design.

I opted to ditch the swivel studs on my rifle and instead had Allterra add two QD cups on the left side of the stock, one at the front of the fore-end and the other a couple inches below the comb in front of the recoil pad.

To keep the weight down on my rifle I had them install a ½-inch recoil pad, but you can go with a thicker one if you like. Allterra will also build your rifle with whatever length of pull you specify.

Before Allterra ships any rifle to a customer, they put it through a battery of quality control checks. One of those is to cycle dummy rounds through the action to make sure there are no issues with feeding, extraction, or ejection.

They will run the action dozens of times to ensure that the magazine is functioning correctly and that the timing with the ejection is correct. The bolt face has an M-16 style extractor and dual plunger ejectors positioned at one and four o’clock. The ejectors kick the empties free without banging them on the windage turret of the scope, meaning the chance of having a case bounce back into the action is essentially zero.

My Mountain Shadow Steel runs flawlessly and has had no issues with either handloads or factory ammo.

One thing to note is that though the bolt glides smoothly up and down the raceway in the action when cycling the rifle, when you close the bolt you will feel more resistance than with most 700-style actions. What you’re feeling is the drag on the bolt body from the raised surfaces in the action that create the “bolt to bore” alignment I mentioned earlier. Though closing the bolt requires a bit more effort than you might be used to, it doesn’t have any practical effect on the rifle’s handling in the field.

Allterra uses extended magazines so the rifles can accommodate handloads with bullets seated out longer than SAMMI spec. The magazine, made by Wyatt’s, can handle cartridges loaded to 2.990 inches, which is .035 longer than the 2.955 SAMMI maximum. This is great for hunters wanting to take full advantage of the 6.5 PRC’s capabilities.

The metal finish on the rifle is very well done. The action and barrel are Cerakoted and the bolt is treated with nickel boron which improves hardness and wear resistance. Even after several hundred rounds though my rifle, the bolt shows hardly any signs of wear.

The rifle comes with a 20 MOA Picatinny rail that’s secured by four fasteners. Allterra also takes the extra step of heat-treating their action screws, which they torque to 55 inch-pounds. The heat treating hardens the screws and prevents them from flexing when tightened.

What distinguishes the company from much of their competition is their attention to detail with how they build their rifles, include some interesting extras they incorporate, and the customer support they provide.

They build rifles in a wide variety of cartridges, will develop handloads for your needs, build the stock to your dimensions and give you numerous ways to finish your rifle.

All that customization doesn’t count for squat, however, unless the rifle performs. And here Allterra Arms excels as well. Not only are their rifles accurate, but they handle well and are built to survive rough handling and extreme conditions. It’s hard to put a price on that.