The New Data Behind 100 of Florida’s Biggest Bass 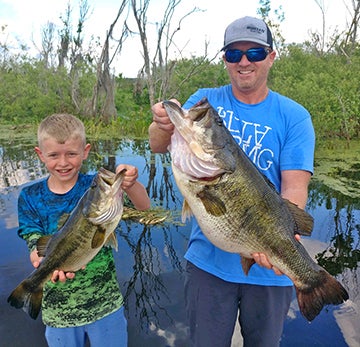 Florida initiated its TrophyCatch program nine years ago to recognize anglers who land large freshwater fish of almost all species throughout the state. Largemouth bass have been one of the most popular fish entered by anglers, who can win prizes and accolades for their catches.

Part of the program is the Hall of Fame (HOF) award for any largemouth weighing over 13 pounds.

HOF catches were submitted from 23 Florida counties, and the data shows that waters in the north-central part of the state have a particularly high incidence of giant bass. Clay and Putnam Counties are on top with a remarkable 30 percent of HOF largemouths. The center of the Florida peninsula is a trophy bass corridor, too. The contiguous counties of Alachua, Marion, Lake, Polk, and Highlands account for another 35 percent of HOF bass.

Some of the massive bass have measured up to 30.5-inches long, others have had a thick 25.5-inch girth. The heaviest HOF largemouth scaled 16.75 pounds, just ounces shy of the Florida record bass of 17.27 pounds taken in 1986 by Bill O’Berry from a Polk County lake. While many anglers are dedicated to dawn and dusk fishing, only 12 percent of HOF largemouths were taken during those times. Most were caught during midday or afternoon.

Artificial lures produced 59 percent of HOF bass, with 41 percent caught on bait. Predictably, 41 percent of the bass caught on lures were taken on plastic worms, far more than any other lure type. Combining all soft plastics, they accounted for 71 percent of the catches. Jigs, bladed jigs, crankbaits, and topwater lures also produced HOF bigmouths.

All anglers in the HOF survey reported releasing their prized bass catch alive.

Natural lakes yielded 90 percent of HOF bass, followed by reservoirs at 8 percent, and rivers at 2 percent.

HOF bass waters varied in size from local ponds of only a few acres to 30,000-acre Lake Kissimmee. More HOF bass were caught in lakes under 100 acres (43 percent) than waters between 100 and 1,000 acres (33 percent). Waters over 1,000 acres produced 24 percent of HOF largemouths.

A high number of HOF bass were caught during either a full moon (19 percent) or a new moon (25 percent).

Very few bass were boated during guided trips or tournaments. Most catches were made during solo outings, or with friends and family.