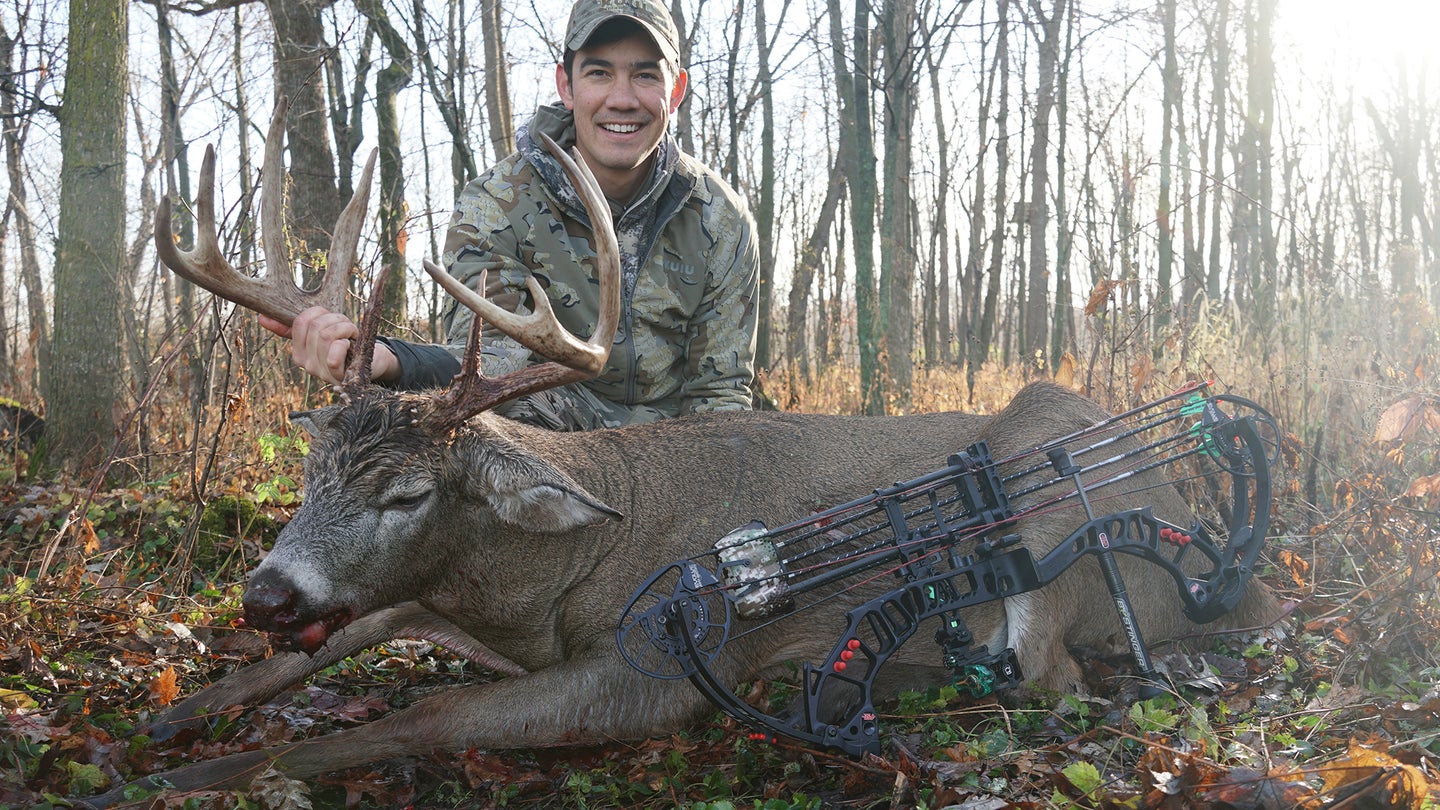 The author with the biggest buck of his bowhunting career. Alex Robinson

What It Took to Kill the Biggest Buck of My Life

HE WAS the most impressive buck we had on the farm that year, maybe any year, and I knew just where he lived. Or, at least, I thought I did. There’s a marshy creek that runs down the west side of the property, and that creekbottom transitions to a 100-yard-wide stretch of hardwoods that border a hayfield. The buck lived in the creekbottom and patrolled the hardwoods for does as they made their way up into the field.

I knew this because my hunting buddy Josh Dahlke and I had the whole area rigged with cellular trail cameras and we’d been monitoring the buck since August. Most of the photos we had of him came from a camera we’d set over a scrape in the timber, within 20 yards of a stand. This was a set that Josh and I had talked about for years, that he’d scouted the previous fall, and that we’d then hung together in the summer.

It was November 6 now, and I was parked about 300 yards away from that very stand, waiting in the predawn darkness. I wanted it to be light enough to slip through the woods without a headlamp but dark enough that I’d be in the stand and ready before legal shooting light.

With just the right amount of light, I left my truck and walked straight across the hayfield as quickly as I could. When I hit the edge of the wood, I stopped. Somewhere back there, probably, was what I hoped would become the biggest buck I’d ever killed. I’d spent months thinking about this deer and planned my work and family schedules around hunting him. I didn’t know if I would have a chance to kill him this morning. But I did know that by entering these hardwoods now, I would certainly risk blowing him out and ending my opportunity to hunt him for good.

In other seasons, on other big-game hunts, I’ve traversed dangerously steep mountain terrain, where a misstep could mean a deadly fall. I felt that same combination of fear and thrill now, peering into the dark woods. One swirl of wind, one misstep, and all could be lost. It was certainly not a life-or-death situation, but in this moment, it kind of felt like one.

And this is what any good adventure relies on: clear and substantial risk, plus the promise of an irresistible reward. Over the next several weeks, we’ll be publishing a series of adventure stories here on OL+. You can also read these features now through our iOS, or Android apps or on Apple News+. The risks in these upcoming stories are often physical and obvious (like freezing to death on a mountain), but they can also be intangible (like blowing a rare opportunity on a limited-entry bull tag). The rewards can be exotic (like the horns of a massive argali ram) or they can be rooted in personal history (like a single perfect archery shot after a decades-long bowhunting career).

The truth is, you don’t need to travel to far-off lands or climb the highest peaks to have a true hunting adventure. You just need a deep passion for the sport, and you must be willing to put that passion on the line.

I certainly felt like my deer season was teetering in the balance as I tiptoed toward that stand. My heart raced with every calculated step. My ears strained for the telltale sound of a deer bounding away through the darkness. But by the time I reached for my climbing sticks, I still hadn’t spooked a deer.

I climbed as quickly and quietly as I could, pulled up my bow, nocked an arrow, and looked up to see a deer walking toward me. It was a buck, and it looked like a pretty good one. Was it him? On impulse, I turned toward the deer, and he spotted the movement. He was 30 yards out and obscured by brush and darkness. But even so, he didn’t look as large as the buck I was hunting. I prayed that he wasn’t.

I reached for my binocular as he turned and slipped into heavier cover and disappeared. He didn’t fully spook, but he didn’t give me a good look either. Was that it?

I’ve interviewed serious deer hunters who have made deep sacrifices to hunt a single trophy buck. I know hunters who have ruined relationships and set back their careers to go all-in on hunting a giant buck they’d become obsessed with. Sometimes these stories end happily, with the hunter killing his buck and then coming back down to earth. Sometimes they don’t. I hadn’t been so extreme with this buck, and I’d never consider myself a big-buck trophy hunter, but I could feel myself slipping in that direction now. I had passed smaller bucks that I would have happily shot in previous years. I’d skipped out on time hunting with my dad and uncle to chase this buck, not to mention all those evenings missed with my wife and 2-year-old daughter.

I thought about all this over the next two hours as the sun climbed over the hardwood canopy. But eventually those thoughts were interrupted by a distant grunt. I looked north to see a massive, gleaming rack 100 yards away in the timber.

“Oh God,” I whispered aloud, overtaken by a moment of panic.

I stood slowly and clipped my release onto the D-loop with a shaking hand. The buck marched directly at me. At one point he disappeared behind a giant oak tree, but I could still see his shadow on the forest floor, closing the distance quickly. Somehow this made me even more nervous.

By the time the buck got to 40 yards, I’d regained some composure. If the deer broke to my right, he’d get downwind of me and surely spook. If he broke to my left, I’d get a good, close shot at him. The buck angled left, and I came to full draw.

He stopped briefly behind a small tree, but all the panic was gone. A summer’s worth of dedicated practice overrode any thought or feeling now. He stepped from behind cover, only 20 yards away, and my arrow zipped behind his shoulder. He ran for 60 yards, stopped, and fell over dead. I watched him for a long time through my binocular. Then I sat down and soaked in one of the best moments of my deer-hunting life. The adventure was all over.

How to Read the Adventure Issue of Outdoor Life