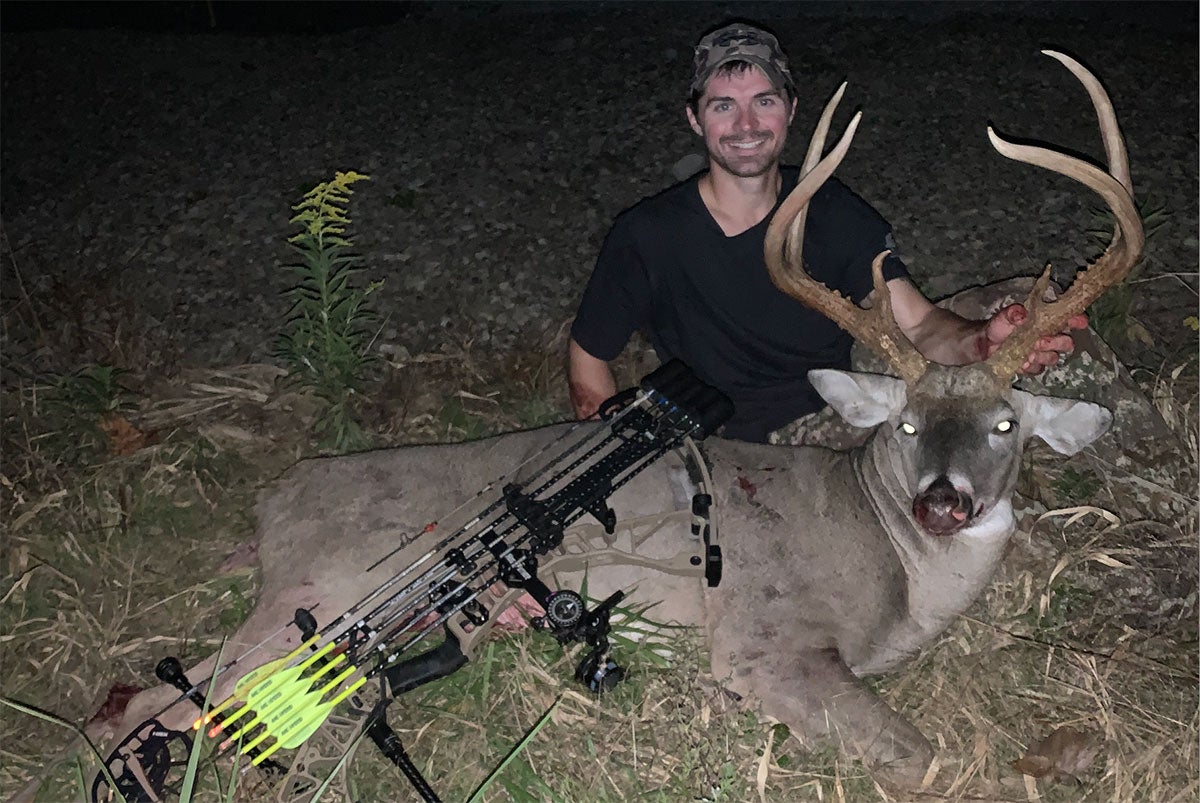 At first, it looked like a stick. Then, Louie Mozurak realized there weren’t any big trees directly overhead. That’s when he got excited and took out his phone.

He walked closer and realized that what he had first thought was a stick, was in fact the biggest four-point whitetail shed Mozurak had ever seen. That was in April 2021. Mozurak, a Pennsylvania resident, was shed hunting an Ohio beanfield where he had permission to hunt that fall.

“I know there’s huge deer in Ohio. But to get my hands on something that big was pretty awesome,” Mozurak says. “There’s definitely no missing that antler.”

It would be another year and a half before Mozurak would get a shot on the buck that dropped the shed. In the meantime, one of the four points receded a bit, making the deer a near-perfect 3-by-3. When the 2022 season rolled around, Mozurak’s lucky field was planted in corn. This meant there was enough cover and thick growth to funnel big bucks, a benefit the field had not yielded the year prior when planted with low-creeping beans.

“It’s a really hard farm to hunt. There’s no pinch points, you’re just in thick, thick woods,” Mozurak says. “I didn’t see him [the season prior], I think he was wintering somewhere else. But I immediately got trail cam pictures proving he was still alive in the spring. I went out there in the summer, set out some more trail cameras, trying to get a good pattern on this deer.”

Mozurak figured out that the buck moved calmly through trails in the corn. He decided to hunt as early in the season as possible, hoping to catch the buck still sticking to its summer pattern. After a few days, he decided to move closer to where the buck would normally come from. The thick forest made for a tricky approach, especially since the strip of woods next to the corn field was so narrow. But Mozurak hoisted himself and his saddle into an immature tree.

One further complicating factor was the shot angle. The way Mozurak was oriented, the buck would probably walk straight at him. Mozurak had no interest in taking a head-on shot and knew he’d have to wait until the buck walked past him to get a decent broadside angle. He decided the sit would be more for observational purposes and he’d come back the next morning with better information on the buck’s routine.

But as soon as that decision passed through Mozurak’s mind, the buck materialized.

“He did exactly what I thought he was going to do, walking right toward me,” Mozurak says. “To this day I still don’t know exactly where he came from. But he ended up turning his full body and smelling where I came in from. He turned enough that I could shoot him.”

Mozurak let an arrow fly, hitting a perfect pass-through shot. The buck ran about 50 yards toward a road and went down.

“It was super quick,” Mozurak says. “From the time I shot him to the time he dropped was probably about 10 seconds and he never moved after that.”

Mozurak doesn’t usually struggle to drag bucks out of the woods, but this one presented a challenge. He estimates the buck weighed about 260 pounds on the hoof.

“He was an old deer, lots of scars on him,” he says. “Scars on his neck, scars on his ears, he had a couple wounds on his back, maybe barbed wire. But I just feel really lucky to be able to harvest a deer like that.”

The 3-by-3 rack measured 140 inches on the dot with 26-inch main beams and 14-inch G2s. Mozurak is unsure why the buck didn’t grow more tines, since it definitely had the room on the main beams to do so. But as Mozurak points out, a six-pointer of this size is extraordinarily rare. The one receded tine stands at just less than an inch long, so Mozurak isn’t sure if the buck will actually measure as a 3-by-3.

“It’s really close to an inch,” he says. “It’s a really swirly point, so I don’t know if it’s really going to be a true 3-by-3, but you can’t even see it in pictures because it kind of comes out at the end.”

Mozurak says the trick with old, wary bucks like this one is to keep your distance and leave them room to feel comfortable until you make your move.

“Sometimes it’s good to sit back and observe before going in there and busting all the deer out,” he says. “The day you go in there is the day you have to kill them. They know you’re there and they know to stay away.”