What Colors Can Deer See?

Hunters used to think that deer were color blind, but the truth is deer can see some colors better than we can 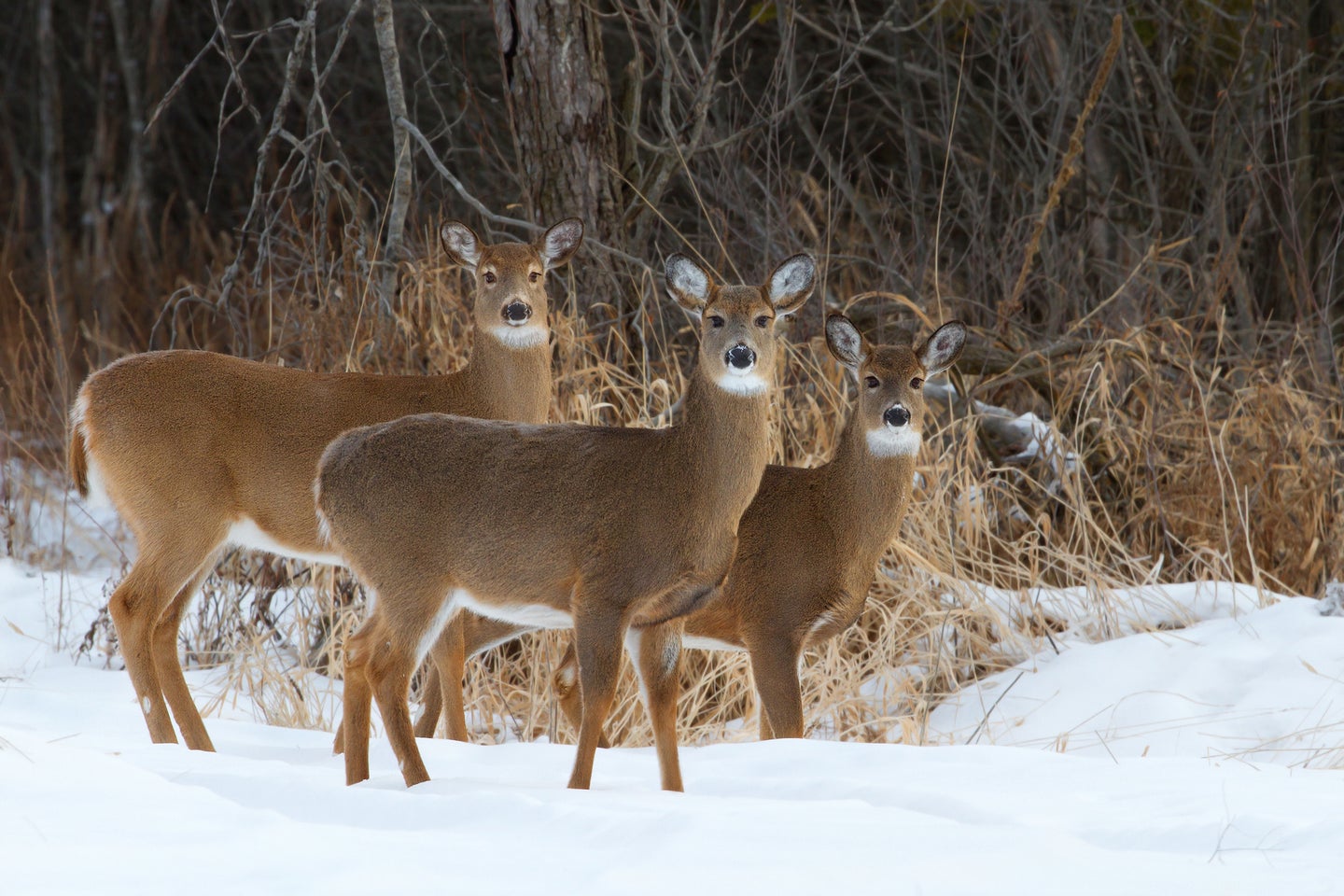 Many hunters spend a lot of time obsessing about camo patterns without truly understanding how deer see. If you want to beat a buck’s vision, you first need some basic knowledge about how deer perceive the world around them. What colors can deer see best? Can deer see color at all?

Hunters and scientists still have some things to learn about deer vision, but thanks to a pile of ongoing research, we do know some things for sure.

For starters, we know that deer can see a limited range of colors. We also know that a deer’s eyes work best during twilight hours, and that they are especially sensitive to short-blue light.

The University of Georgia’s Deer Lab has been on the cutting edge of most of this research, and Outdoor Life recently caught up with Blaise Newman, a PhD student at UGA who is studying how deer vision influences their behavior. Her research in the Deer Lab is being sponsored by Sitka gear, and it looks specifically at how whitetail deer use their eyes to avoid predation as they move through different landscapes.

“What I focus on is understanding how deer’s vision helps them meet their ecological needs—how their physiology helps them meet their basic needs and functions,” Newman says. “Sitka funded this project in an effort to advance everything we know about deer vision. As a camo company, it makes sense. They want to know how they can make their camouflage less detectable by deer.”

Understanding the Basics of Color Vision

Hunters used to believe that deer were unable to see color, and that they only viewed the world in shades of gray. We can now say with certainty that deer can see color— just not in the same way that humans do because their eyeballs are physiologically different than ours.

The biggest difference is related to the density of rods and cones in our respective retinas. Without getting too deep into the science of vision, rods in the retina provide coarse detail in low light, while cones provide finer detail and color vision. Human eyes have more cones than deer eyes, while deer eyes have significantly more rods than ours do. This means that humans can see details more clearly than deer, while deer can see much better than humans in low-light conditions.

In short, no. Deer can’t see blaze orange very well. Researchers at UGA helped prove this with a 1992 study, during which they sedated deer, emitted different wavelengths of light into their eyes, and measured the responses in the deer’s brainstem. They found that reds and oranges didn’t even register in the deer’s brain—at least not the same way they would in a human brain.

A more recent, follow-up study conducted at the Deer Lab took this research one step further. The study, led by Dr. Gino D’Angelo, used chemistry to map the photoreceptors in a deer’s retina, and it verified that deer were unable to perceive bright oranges and reds. Through a deer’s eyes, these colors show up as muted grays and browns.

There’s also an important lesson here in terms of the lights we use. You might feel more comfortable using a bright white light when walking through the woods in the dark, but you’ll stay better hidden from deer (and other mammals) if you use a headlamp with a red light.

“We believe that they see those oranges and reds—those longer wavelengths—more like a muted yellow or a muted brown,” D’Angelo explained in a podcast produced by the National Deer Association. “So, it has some color to it, especially the green aspects and getting into that yellow range, but not the oranges and reds that we see in brilliant detail.”

What Colors Can Deer See Best?

The flipside, according to UGA researchers, is that deer can see blues far better than humans can. Human eyes have an ultraviolet filter that protects them from the sun’s harmful rays. Deer don’t have this filter and can also see ultraviolet light, which falls under the blue spectrum.

“The lens in a deer’s eye are perfectly clear, where ours are more like yellow shooting glasses that filter out some of that ultraviolet,” D’Angelo explains in the NDA podcast. (Which is worth a listen if you want to learn even more about how deer see, hear, and smell.)

This means that from a deer’s perspective, a white shirt or a pair of blue jeans might stick out more than a blaze orange vest. It also means that deer are especially sensitive to clothing made with reflective materials, as well as clothes washed with detergent containing UV brighteners.

What’s even more interesting is that a deer’s ability to see in the blue spectrum dictates where they move and when. Newman’s most recent project touched on this connection by tracking whitetail bucks in Florida with GPS collars and seeing how they moved through different landscapes at different times of day. She found that these bucks often chose to move through more open and brightly lit areas that reflected plenty of blue light including UV.

“They’re actually moving through an environment that makes it easier to detect you,” she says. “One way I always relate it is if you had the option to walk down a dark alley or a well-lit alley, which would you choose to move through?”

Newman also evaluated how deer move during low-light hours by hooking them up to an electroretinography machine and measuring their response to different light stimuli. (This is essentially the same technique that was used in the Deer Lab’s 1992 color vision study.) She found that deer were most sensitive to light and movement under twilight conditions, which supports the idea that deer are more active at dusk and dawn because that’s when their eyes function the best.

“One of the most interesting things we found is that deer eyes can detect the best, and are most sensitive, during twilight periods,” Newman says. “So, if you’ve been hunting all day just waiting for that buck to come by, and he’s finally coming out at twilight, you better be careful because his vision is the most sensitive it’s been all day.”

If deer vision seems inferior to ours, that’s only because we see the world through human eyes. As apex predators and tool developers, it’s beneficial for us to see in finer detail and to be able to recognize a wide range of colors. These subtleties aren’t so important to deer, though. Their eyes have evolved to prioritize detection over detail, and their abilities in this department are vastly superior to our own.

“Deer are a prey species,” Newman says. “Having detailed discrimination isn’t really important to deer. They just need to be able to detect and escape something.”

When it comes to color vision in particular, Newman explains that deer benefit from having less “chromatic noise.” By not having to process so many colors in the retina, their eyes can detect movement more quickly and easily. This means that deer can process visual cues much faster than humans do.

“They see motion at an astounding rate compared to our own ability,” she says. “The other aspect is temporal resolution—the time interval over which you integrate information—and their temporal processing just outstrips ours.”

Now that you know what colors deer can see, you can use that knowledge in several ways. Here are a few tips for deer hunters in Newman’s words:

Beyond that, hunters should understand that deer see best in low-light conditions, even though we don’t. So trying to sneak through the middle of a field at dawn or dusk probably isn’t a good idea. And veteran hunters already know the biggest takeaway of all: the best camouflage is sitting perfectly still.