Is Hunting with Cellular Trail Cameras Fair Chase or Cheating? 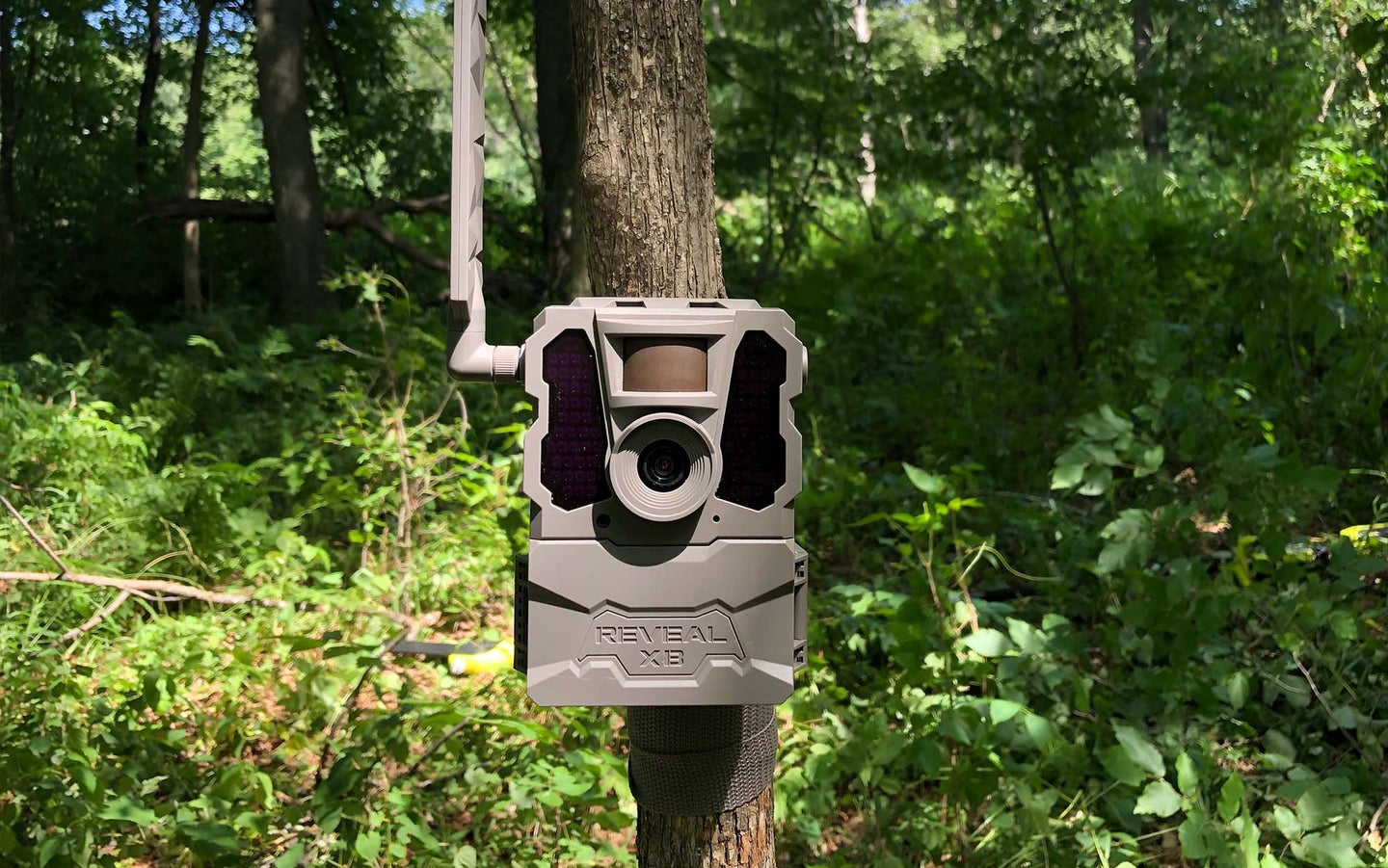 Earlier this week we published a story about the best cellular trail cameras, for which two colleagues and I reviewed a variety of cell cameras over the course of several months. The setup process was a bit daunting (linking up every camera on an individual app and plan was a bit of a pain), but the testing process was fun and the results were illuminating. You can now get a high-quality cellular camera for about $100, which is right in the price range of decent standard trail cameras. The plans for each camera are an additional cost, but they can be set up monthly for about $10 to $30. In other words, cellular trail cameras are now more affordable and offer more performance than ever before.

Another realization I came to after this test was just how much my whitetail hunting strategy has come to rely on cell cameras. On a property I hunt in Wisconsin, we’ve got cell cameras covering major food sources, travel routes, and bedding areas. My buddy Josh Dahlke and I alter our aggressiveness based on what the cameras are telling us. If there’s minimal buck activity, we’ll hunt around the edges, picking safe stands where we won’t blow out deer. But if we’re getting regular activity with mature bucks on camera, we’ll sneak into our best spots even if it risks blowing out a deer. With the help of the cameras, we both feel like we get to hunt as much as we want without over-pressuring mature bucks in the area.

My increasing reliance on trail camera technology is also happening as many folks are pushing back against the use of cell cams and trail cameras in general. Most recently, Utah banned the use of trail cameras during hunting season. Nevada and Arizona also have trail camera bans for hunting. Montana, New Hampshire, and Alaska have partial bans, prohibiting the use of wireless or cellular cameras during the season, according to a report in the Daily Record. But make sure to check your local regulations before hunting with any kind of trail camera, especially on public land. (Some of the regulations are a bit confusing, but more on this later).

This all got me thinking: Can I run my cameras and still hunt ethically, under fair chase standards? Or, am I sliding down a slippery slope of technology replacing hunting skill, where apps, GPS, and powerful real-time data serve up trophy bucks on a platter?

According to the Boone & Crockett Club and the Pope & Young Club, it all depends upon how you use the technology. Earlier this year, B&C made an official statement on the use of cellular trail cams:

“Trail cameras can be a helpful tool in game management and selective hunting. The use of any technology that delivers real-time location data (including photos) to target or guide a hunter to any animal in a manner that elicits an immediate (real-time) response by the hunter is not permitted. ‘Real time’ is the key concept. Seeing a photo and harvesting an animal a few hours later, or even the same day, uses this technology to assure a kill. It also takes advantage of the animal, which cannot detect impending danger from a camera. Waiting several days, or even until the following season, to pursue an animal captured on camera is different, and would not be deemed an unethical use of a trail camera.”

The Pope & Young Club follows these same guidelines, which seem good and fair. I don’t like the idea of a hunter getting an update on their phone alerting them that a big buck has come to a corn pile, and then allowing that hunter to run out and shoot the buck moments later.

In reality, I don’t think that scenario happens very often, but I’m sure it has happened. Here’s a murkier and more likely scenario: You’re heading out for an afternoon hunt when you get an update from one of your cell cams showing a shooter buck eating happily in a food plot. You’ve got a stand hung on a heavily used trail near that food plot, and you know you can slip in there without busting him. Maybe the buck will use that trail, maybe he won’t. But we all know you’re going to hunt that stand (assuming the wind is right). How could you not? But some folks would classify this as a real time decision, and if you kill that giant buck, he might not be eligible for the record books. More importantly, your hunt might not meet the standards of B&C fair chase ethics.

Kansas has an interesting regulatory wrinkle here. In the state regulations it says: “using two-way radios or cell phones in any manner for the purpose of pursuing, chasing, or hunting game animals or furbearing animals, or to give information concerning the location of big game by radio or mechanical means” is prohibited. Since cell cams send images to a cell phone, it’s seems they would be banned. But that’s not exactly the case. I called the Kansas Department of Wildlife office and spoke with an agent who said cell cams are allowed during hunting season. You just cannot receive transmissions on the same day you hunt. This might sound extra wonky, but many modern cell cameras have settings that actually allow for this. Instead of immediate transmission, you can set them so they transmit once per day, and you can select the time. So, theoretically, you could select for transmission at 9 p.m. (after shooting hours) every day and then hunt the next day wherever you like without violating the rules.

But still, some would argue that we should just do away with this technology altogether. If we ban it outright, then it can’t be used unethically under the strictest of definitions. I think the case for doing this would be to stop us from sliding farther down that technology slope. As a hunting community, we will have to draw a line (actually, we’ll have to draw many lines) limiting the technology we decide to use in the future. So, some would say that we might as well draw it here before the technology becomes even more powerful and prevalent.

The Case for Hunting with Cellular Trail Cameras

First off, running cellular trail cameras is fun—really fun. When you set them up properly, they’ll deliver quality photos to you all season long. So, when you’re working, raking leaves, or watching your kid’s football game, you just might get an update from the deer woods. That photo or video of a shooter buck will put you in the hunt, if only for a minute. Some folks like to read the news each morning with their coffee. I check my trail camera apps, and I feel much healthier and happier for it.

But sadly, not all fun activities are ethical. So, let’s look at the practical use of this tech in the field. I’ve found that cellular trail cameras are most useful in areas where you want to limit human disturbance. Think trails near bedding areas, hardwood ridges that are difficult to access, or staging areas near major food sources. On our hunting property in Wisconsin, we try to avoid tromping into these areas until we’re going to hunt them (and we hunt them sparingly). We want to give the deer places where they feel safe. This goes for mature bucks, but also does. The same concepts hold true for the public-land hunter who treks in deep to avoid other hunters.

I’d argue that in some ways using cell cams and hunting with a very targeted strategy is more ethical. By hunting this way, we’re disrupting fewer deer throughout the season. We’re hopefully letting them live a little more naturally than if we bombed in there every week and spooked deer out of their bedding spots and security areas. Part of ethical hunting is adhering to fair chase. But in modern times, part of ethical whitetail hunting also means being a good steward of the land and the herd. Reducing pressure and human disturbance (so that deer can behave like deer) is an important part of that equation.

And if I’m being totally honest, even with the help of cellular trail cams, we’re not that good at killing the biggest deer in the area. Sure, we’ve taken nice bucks over the years and have had exciting hunts, but over the course of three seasons of hard hunting, we have never patterned the biggest buck on the block and then killed him based on trail cam data. The truth is, mature bucks cover ground far beyond our property borders, which makes patterning a single mature buck extremely challenging.

I’m also convinced that some of the wariest old bucks avoid trail cameras. I’ve had other experienced deer hunters offer similar opinions. The theory is that they pick up on the noise of the camera’s shutter or the scent you left by hanging the camera, or a combination of both. On multiple occasions, I’ve captured photo series that show a buck walking by the camera, then noticing it, then approaching the camera with ears forward, alert posture, and then fleeing the scene. Often, we’ll only get a few photos of the biggest bucks throughout a season. I think this is partially because these deer are just moving through the property, but also partly because they’re good at avoiding camera sites.

Then there’s the randomness of the rut and the chaos of Wisconsin’s nine-day gun season, during which more than 500,000 hunters hit the woods. Unless you are a truly elite whitetail hunter, or you have complete control over a large, well-managed private property, it’s difficult to perfectly pattern a single mature buck, and get it tagged, year after year in Wisconsin (or in any other state with heavy hunting pressure).

On OutdoorLife.com, we run hundreds of stories about deer hunters and their biggest bucks every year. The play-by-play for most of these stories goes something like this: 1) Last year we got trail camera photos of a big buck, but then he disappeared; 2) We got a photo of him again this summer, and he was huge; 3) By hunting season we hoped he was still around, but we weren’t sure; 4) One magical day he showed up, and we shot him. We couldn’t believe it.

The story tends to be the same whether the hunters are using standard trail cameras or cellular cams.

This is all to say that when I use cellular trail cameras, it doesn’t feel like I’m cheating. Those mature bucks win the vast majority of the time, and I’m usually going home empty handed. Most seasons I still need to spend time (and plenty of it) on stand to get a chance at a good buck. I like it that way. Cellular trail cameras simply give me useful and recent data on where the best activity is. The rest is still up to me—and the deer.

I think it’s best to apply situational ethics to almost all hunting discussions. In some places and instances (like most whitetail hunting scenarios where this tech is common), cellular trail cameras still allow hunters to practice fair chase. In other situations (like over water sources on drought-ridden public lands in the West), cell cams probably do offer an unfair advantage over game. It those cases, it should be up to the state agency to step in with regulations, and it seems that’s already happing. In all other cases, I think cell cam limitations should be set by the individual hunter. At the end of the day, we know what fair chase is, and what it isn’t.