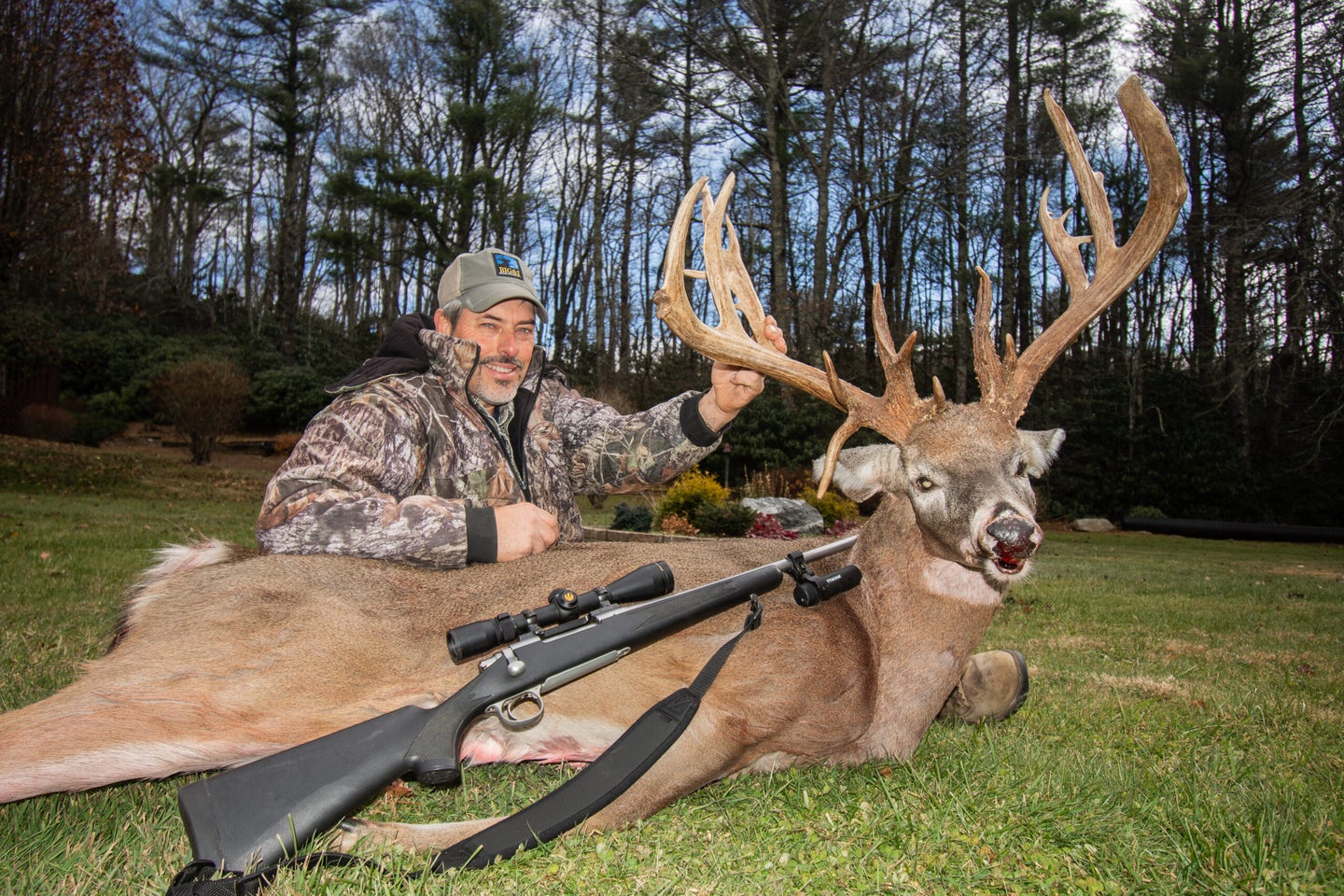 It was Dec. 7, during the very last phase of the rut. With most does already bred, and most bucks exhausted from chasing does, Vincent Clark climbed into a shooting house in Avery County, North Carolina. It was a cold day and Clark was huddled in the blind overlooking a small food plot on private land surrounded by mountains accessible to public hunting. About 5 p.m. he looked up and a great buck was standing near the food plot edge at 100 yards. It wasn’t the buck Clark was expecting, but he recognized the massive whitetail from trail cam photos and shed antlers of the deer. Clark opened a window of his blind, brought up his 7mm Magnum Remington bolt-action rifle, steadied his aim, and fired. The buck ran a short distance and fell dead.

“I only had this buck on camera a few times this year, and very rarely before in years past,” Clark told his friend Christian Gardner, video producer with Appalachian Holler Hunters. “This buck was not patternable at all,” says Clark.

Gardner spoke with Clark at length about his hunt, and examined the buck the day after it was taken. Clark asked Gardner to speak on his behalf to Outdoor Life about his remarkable deer. Word of the buck is spreading fast, and many news outlets are asking to talk with Clark, so his time is limited. The N.C. record non-typical deer is 212 7/8 inches, taken two years ago in Brunswick County, a coastal region with rich soil and plenty of agriculture.

“This deer is whopper, something we’ll never seen again in our mountain area,” says Gardner. “It has 23 points and has been carefully green-scored by an official B&C scorer. It’s going to score well over 200 inches as a non-typical. They’re keeping that score quiet, because it’s believed Clark’s buck may become the number one non-typical whitetail buck taken in North Carolina. But that won’t be official until the 60-day drying period for the rack is over, and it’s scored again.

“We’d expect big bucks to be near the coast, not mountainous Avery County where winters can be snowy and tough, and whitetail food is scarce,” says Gardner. “We don’t have many deer in the Carolina mountains, and hardly any giant bucks. The next best buck taken here this year is a 143-incher, and that was the best deer shot in the area in five or 10 years.”

Gardner says Clark’s buck was checking scrapes when it was taken, and was very lean, with lots of loose skin on its back and hams. He believes the deer was 30 to 40 pounds lighter than it should have weighed (just 200 pounds). The buck also is an old warrior, having only a few worn teeth left in its mouth. The buck is 7 to 8 years old, and will be mounted by a taxidermist.

“I knew [that late in the season] we’d have to hunt a lot, and get lucky,” Clark told Gardner. “I just got lucky that he happened to walk out.”