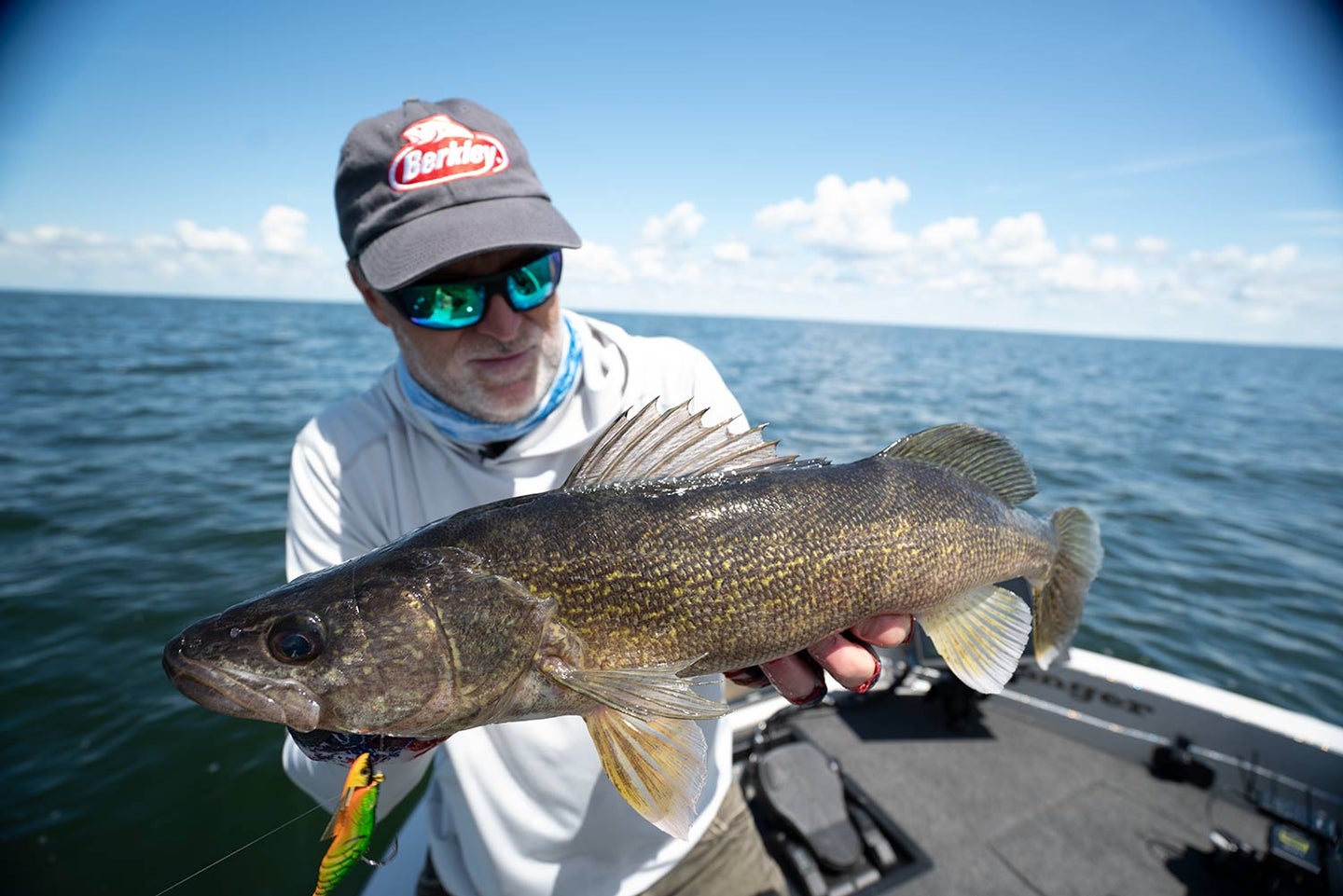 Fresh Water Fishing Hall of Famer Steve Pennaz is one of the nation’s highest regarded multi-species anglers. Over his career, Pennaz has successfully fished thousands of locations around the world in both fresh and saltwater. He is highly skilled at finding and catching fish on new waters, a skill that drives his highly-rated television series Lake Commandos nationally aired on Sportsman Channel and World Fishing Network.Walleyes are, perhaps, his favorite game fish of all, so we caught up to Pennaz recently to pick his brain on how to catch more and bigger fish in your home waters.

Q. On Lake Commandos, you guys fish lakes that you’ve not previously fished before. If I wanted to catch a limit of walleyes o n an unfamiliar lake, what are three keys to narrowing down where to fish?

A: “Approaching a new lake allows you to fish without getting bogged down with memories of previous trips. This frees you to make decisions based on what you are experiencing on the water.

“1. Research—I study a body of water before committing to fish it. What does DNR survey information reveal? What I am hearing from other anglers that I trust.

“2. I rely on seasonality for clues on fish position in a given lake. Early in the season, walleye position is determined by the spawn. Mid-summer, I look at outside weed line and deeper structure to find fish and fall, the fall can be shallow or very deep.

“3. Water clarity—Turbid lakes have limited light penetration so weed growth may end as shallow as 6 or 8 feet, so I stay shallow in these lakes and fish baits like cranks or rattlebaits that walleye can find. On clearer natural lakes, I use the depth of the deep weed line to help narrow my search, and study my electronics to locate concentrations of fish.

“Finally–if you are fishing with a couple buddies, always start with different baits or lures. It doesn’t makes sense to all tie on 1/8-ounce chartreuse jigs and then expect to find wildly better results from one another. Try this instead: each of you use a different color and size of bait, and let the fish tell you what they want that day.”

Read Next: How to Catch Walleyes in the Weeds

Q: It’s opening day of walleye season in Minnesota. What bait/lure/program will you be using?

A: “It’s tough to beat a jig on early-season walleyes, but trolling cranks after dark can be incredible, too.

“Here’s what I did last opener. I fished a 1/4-ounce jig tipped with a 3.4-inch Berkley Champ Minnow (Silver Shiner) and cast to the first break outside a gravel point. Best depth was 7-10 feet, but caught fish as deep as 16 feet.

“I grew up fishing live bait, but I fish soft plastic more now because it allows me to fish faster, cover more water and trigger strikes.”

Q. Many anglers dream of catch ing a 10-pound wal leye. Where, when, and how can they make that happen?

A: “There are several great places to catch a 10-pound or bigger walleye this season. My favorite is Green Bay, especially early in the season. The type of potential here? A few years back, Bret Alexander and I put several in the boat—the top 10 averaged 10 pounds or better! Lake Erie and Bay of Quinte on the northern shore of Lake Ontario also produce giants daily. Trolling boards and stickbaits are deadly on all three bodies of water. I prefer to cast jigs/plastics, rattle baits and Johnson Johnny Darters.”

Q. If you had to pick a singular best lure for walleyes, what would it be?

A: “I’m a huge fan of shad-style cranks like the Flicker Shad because they are so versatile. They are heavy enough to cast, but are also deadly trolled.”

Q: If you had to pick a singular live bait for walleyes, what would it be?

A: “As much as I love fishing leeches, day in and day out minnows (shiners, fatheads or suckers) are too good not to fish most often.”

Read Next: 7 Crankbaits for Cool-Water Walleyes

Q: What kind of electronics do you use to find walleyes and how do you use it?

A: “The world found out just how deadly Garmin’s LiveScope is this past spring when pros Hank Cherry, Todd Auten and Stetsen Blaylock swept the top three spots in the Bassmaster Classic using the technology. It might be even better for walleyes as they spend so much time over clean bottoms and mid-depth structure where they are easy to see with LiveScope. I mount the transducer on the side of my boat, and then scan 180-degrees down and out (as much as 60 feet) for fish that I can cast to. In many cases, I can not only pinpoint fish location, I can watch their response to my presentation and, get this, fairly accurately determine fish size (often within a couple inches). Never expected this kind of technology to b available during my lifetime.”

Q: To the uninitiated, what’s the best rod, reel, and line combo?

A: “It’s tough to beat a well-built 6-foot, 8-inch, medium power spinning rod with a fast tip, size 30 spinning reel loaded with 8-pound braid like Berkley X5 tipped with a 5-foot leader of 8-pound test fluorocarbon—its so versatile. It’s a great option for live-bait rigging, casting jigs or larger cranks, and is deadly for trolling cranks because you can clear debris from baits without having to reel in every time.”

A: “Lure color can be very important. Then, again, there are times when color really doesn’t matter. My go-to in most waters is black/gold, but there are times when fish in some lakes are very color specific. What many walleye anglers today don’t realize is that weeds hold way more walleyes than many traditional areas and fish in grass often feed on juvenile bluegills. In these waters, cranks with yellows, blues and purples will often out-fish traditional walleye colors like black/silver by a long shot.”

Q: What’s your favorite jig head to use?

A: “There are many styles of jigheads from traditional round to those designed to cut current. Because I fish soft plastics so often, I find jigs like the Berkley Half Head with a semi-spherical head and bait keeper cones along the hook shank are best for keeping soft plastics in place. My favorite sizes are 1/8. 1/4 and 3/8 ounces.”

Read Next: The Best Baits for Catching Giant Prespawn Walleyes

Q: Day or night? When is best?

A: “Day—fishing at night can be incredible, but I’ve come to realize that potential issues are magnified after dark. Plus, I’m less crabby when i get a good night’s sleep.”