It’s not even close. No other 3-inch shotgun is as versatile and reliable as the A390 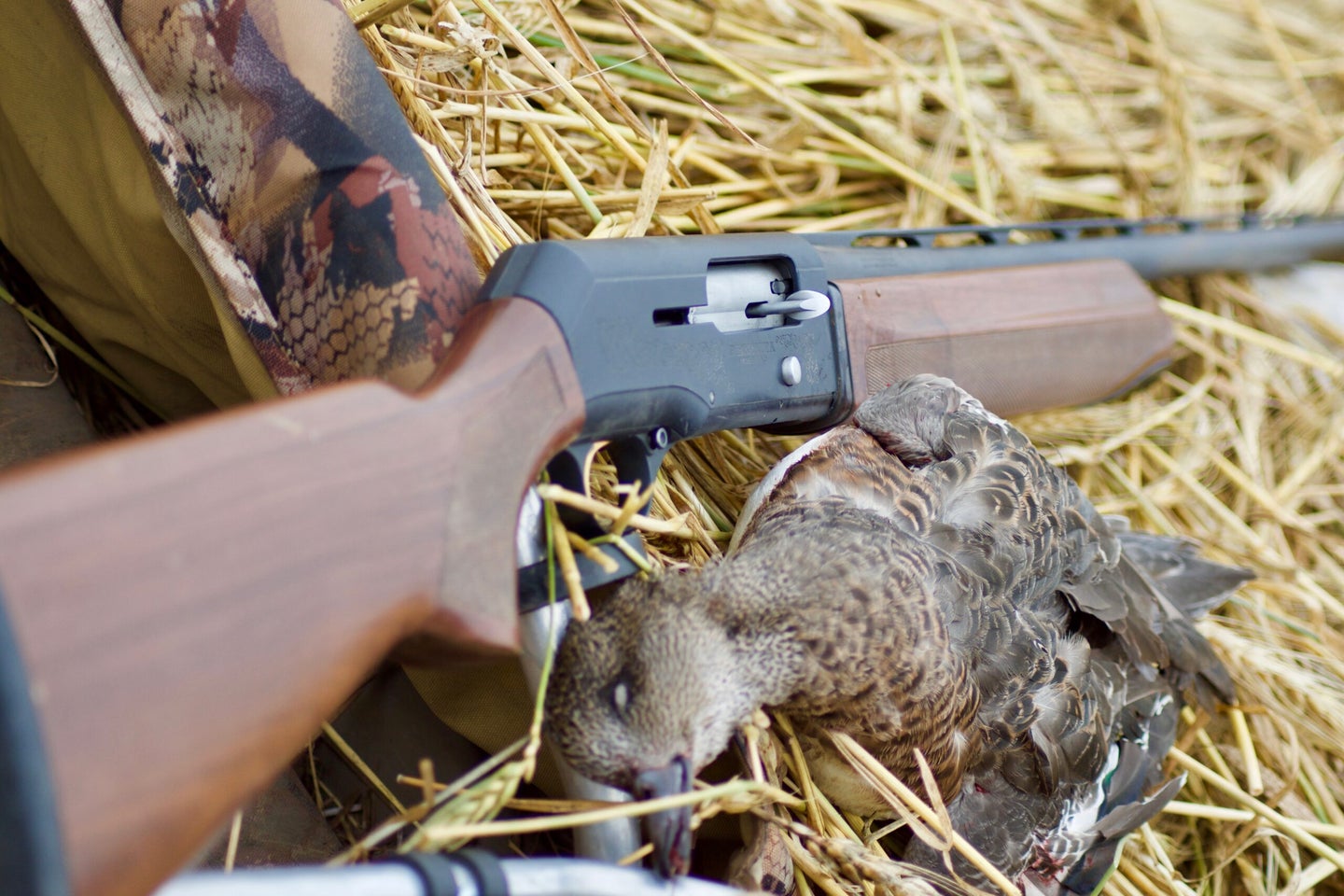 Years ago, a good friend of mine was working for Beretta and invited me to hunt pheasants in eastern Kansas. We shot a few rounds of skeet before heading to the field with the A400 Xplor Action, a fine gun Beretta was getting ready to unveil. There were a few other hunters in our group who had not brought their own personal guns because we were there to test a new one and we ended up being an A400 short. Since I always keep my old rusty Beretta A390 Silver Mallard in the truck during hunting season, I walked back to the pickup and unsheathed it from my grandfather’s leather gun case so we would not have to share shotguns.

In between rooster flushes and shotgun volleys, I asked my old buddy just why in the hell Beretta stopped making the A390.

I politely smiled and continued stomping through the rows of milo. My buddy was wrong, of course, but I was an invited guest, so I kept on pulverizing pen-raised ringnecks with my favorite hump-backed shotgun. The Outlander was nowhere near as fine a gun as the Silver Mallard. The A390 has been the best damn 3-inch semiauto shotgun since it debuted in the early 1990s. Here’s why no other 3-inch auto has taken its place.

My History with the A390

The first time I ever shot an A390 in 12-gauge (there is also a 20-gauge version and a Gold Mallard model that is not as widely available) was at the skeet range. I had just finished embarrassing myself by breaking four clays total with a clunky pump gun. My boss at the time handed me the A390 for the second round.

“Everyone shoots this gun well,” he said.

That made me even more nervous than I already was. The group I was shooting with were crack shots. All of them had broken more than 20 clay birds. Now I was shooting a gun that supposedly everyone was capable of shooting accurately. What if I didn’t?

Fortunately, the gun was a good fit. I went from breaking four clays to 16 in the second round and posted an 18 in the final round. As I have shot with more folks, I’ve found that the Beretta 300 series guns—A302, A303, and A304—which spurred the A390, are the autoloaders many great shots got their start with. They are guns that a wide variety of shooters can shoot well. Some of the best pro sporting clays shooters I know began with a 300 series Beretta in their hands.

The A390 is the only gun I’ve shot that I know makes me a markedly better shooter. I’m fairly average with a shotgun most days, but my best shooting has always been with the Silver Mallard. Over the years, I have had to shoot many different shotguns, and it’s the only one that I always feel confident with. I’ve killed ducks with the Beretta at 40-plus yards and flopped turkeys with it beyond 50. The gun patterns phenomenally. I’ve shot all kinds of waterfowl loads through it at the range with a Rob Roberts Triple Threat T2 choke and it consistently puts 70 percent (or higher) of the pellets inside a 30-inch circle at 40 yards.

Most of us who hunt with shotguns know that the 3.5-inch shotshell is no longer a necessity. Non-toxic ammunition and choke technology is such that you don’t need to buy a 3.5-inch gun anymore, so I almost made the case for the A390 being the best autoloader ever. But Benelli, Beretta, and Winchester all make stout 3.5-inch guns that are slightly more advanced than the Silver Mallard (mostly due to exterior features and finishes). But if you can’t afford a Super Black Eagle III, A400 Xtreme, or Super X4, the 390 is the next best option.

There are multiple reasons why the Silver Mallard is the best 3-inch gun to own. Chief among them is price. I bought mine used for $550 more than 10 years ago. The price of A390s has risen in the last decade, because more people are realizing what great shotguns they are, but you can still pick one up for $700.

The gas system in the A390 is also slightly better than the earlier 300 series models. It is more tolerant of lighter loads, so it cycles 7/8- and 1-ounce shotshells reliably. I have had a few target loads hang up in my action over the years, but it rarely happens with heavier 1 1/8-ounce payloads.

The square backing of the shotgun receiver also gives you a better sight plane than a rounded action, which is the reason I vault this gun ahead of the earlier 300 series Berettas. Some of the most accurate shotguns in history have been humpbacks. John Browning’s Auto-5, Benelli’s Super Black Eagle, Franchi’s AL-48, and the Browning B-80 are all fine examples.

Gas guns are notorious for needing to be cleaned more often than inertia guns, but the A390 is the cleanest gas-operated autoloader I have ever shot. It does get dirty faster than an inertia gun, but it also cycles more reliably when it is properly cleaned. One of the nice “features” of the Silver Mallard is the action begins to slow down when the gun begins to get dirty. It’s not noticeable if you’re unfamiliar with the gun, but once you start shooting it regularly, it will become apparent when the gun needs to be cleaned.

If you are a left-hander (like me), the safety is reversible, which wasn’t that common for shotguns built in the early 1990s. Beretta’s trigger group is a little more tricky than some others. There is a small spring that holds the safety in place and if you don’t put your finger over the hole when releasing the tension on it, it will fly out. The spring is so small, you will likely never find it. I speak from experience.

The only drawback of the Silver Mallard is that it won’t accept aftermarket extension tubes, so spring snow goose hunters will have to buy a more modern autoloader.

Read Next: Gas vs. Inertia: Which Semiauto Shotgun is Best?

There are a few 3-inch guns that I would put on an almost equal footing with the A390. The first is Benelli’s new Super Black Eagle III. The Italian gunmaker finally debuted the 3-inch version of the SBE3 last year. It’s a fine gun, and in terms of functionality it can keep pace with the Silver Mallard. But the A390 is $1,000 cheaper. You could buy the 12- and 20-gauge version of the Silver Mallard for the price of one SBE3. The M2 is also a quality 3-inch gun, but again, you’re paying $1,400 for it.

TriStar’s Viper G2 is basically a knockdown version of a Beretta A400. The G2s are gas-operated guns and utilize a similar Beretta-style choke system. They are workhorse guns, no doubt. I’ve shot them at the range and on ducks, and have never had a malfunction other than the odd shotshell hanging up in the action. But they don’t have the feel of a Beretta. They are not made to the same standard either, which is fine. There are many manufacturers that make price-point guns. But if you can buy an A390 for the same price as a G2, the choice is an easy one.

The Browning B-80 looks and shoots like a Beretta because it is one. Browning loved the 300 series Berettas so much, they had the Italians put a square-back receiver on a Beretta 303 and called it the B-80. You can snag a used B-80 for $350. They are good guns that shoot well, just be careful to make sure you are buying the 3-inch version. Many B-80s were chambered for 2¾-inch loads only. The 302 and 303 Beretta barrels will actually fit the B-80. But a gun that’s a carbon copy of another autoloader—with some minor tweaks—can’t be under consideration for the best 3-inch semiauto of all-time, and so the A390 reigns supreme.