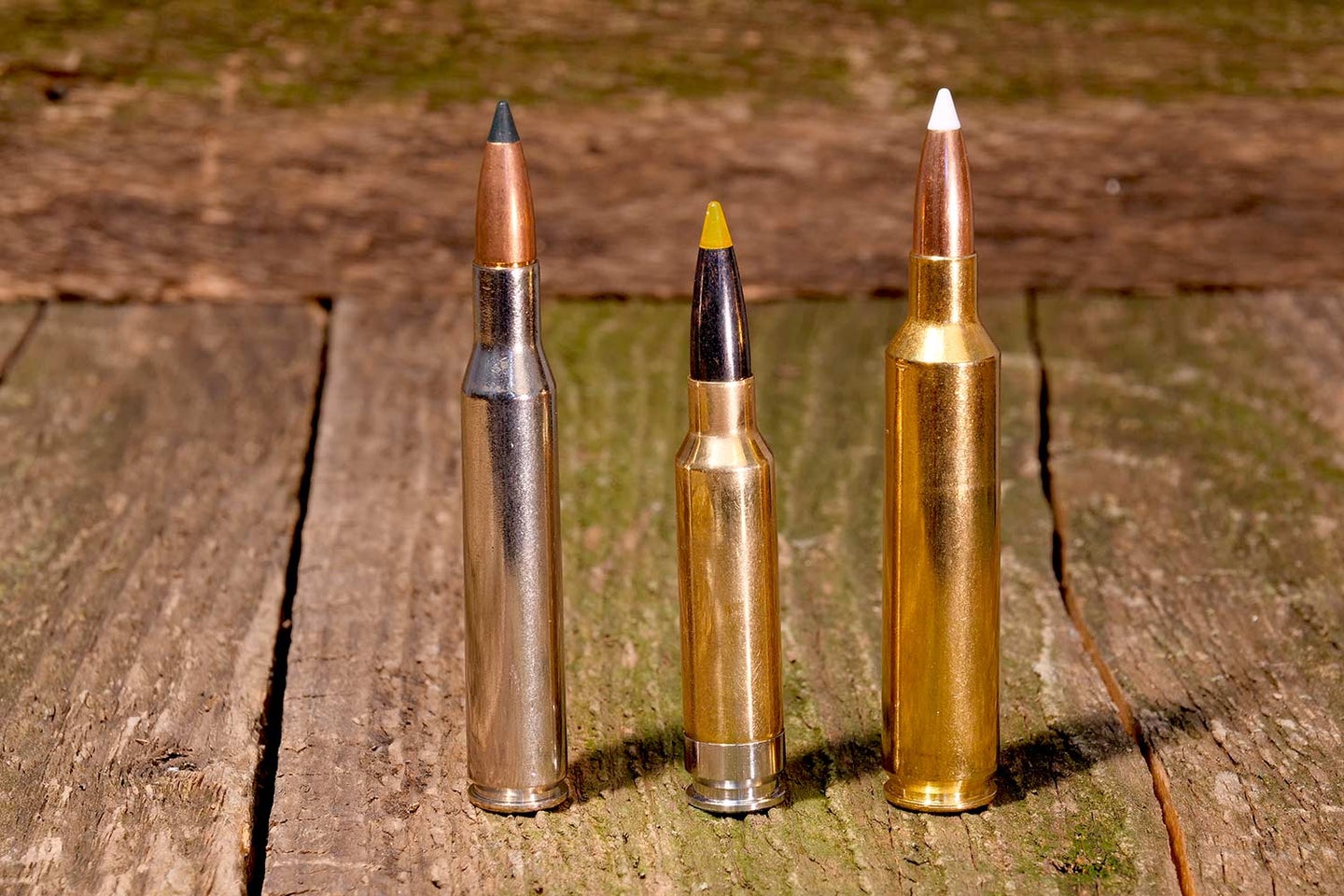 Here stands the old warrior with its two newest competitors in the rather small .27-caliber world. Both new rounds exceed the ballistics of the old one, but do it in different ways. The .277 Fury works with much higher chamber pressures to get high velocity. The .27 Nosler works with a larger powder reservoir. Ron Spomer
SHARE

.270 Winchester Is Still the Popularity Champ

Winchester’s original .270 of 1925 is still embraced as a mild-shooting, flat-shooting, open-country deer cartridge. And it has worked just find on elk, moose, even big brown bears, though most think it waaay too light for that. Old Elmer Keith back in the dark ages of the mid-20th century claimed the .270 Winchester was an adequate coyote round.

While Elmer had his fans agreeing, the thorn in Elmer’s side, Jack O’Connor, had his readers lapping up the .270 Winchester. Historians of guns and ammo credit O’Connor’s writings for popularizing the little .270, which was and still is a bit of an oddball caliber. When Winchester came out with this modification of the .30-06 these was no other 27-caliber cartridge in the world. And there haven’t been a heck of a lot since. Weatherby came out with his .270 magnum fairly soon (about 20 years) after the .270 Winchester took off, but the next .277 shooter didn’t pop until 2001 as the .270 Winchester Short Magnum. It nearly matched ballistics of the Weatherby Magnum. Finally, the puny 6.8 SPC from Remington appeared about 2004.

Despite these developments, the original .270 Winchester continued to rule the roost. It’s been one of the best selling, popular all-round hunting cartridges in the U.S. Much of it’s appeal is reasonable recoil, fairly significant muzzle velocity in the 3,000 fps range, mid-sized bullet weights found to be ideal for taking deer-sized game and good enough for some larger stuff with good design and placement. The .270 Winchester fits standard-length actions with standard diameter bolt faces and standard magazines. It’s just too convenient and effective to go away. But that doesn’t mean we can’t come up with other cartridges shooting .277-inch bullets. And suddenly, in 2020, we’re getting two of them.

Equally significant is the 27 Nosler’s recommended twist rate: 1 turn in 8.5 inches. Why so fast? To stabilize the new, high B.C. bullets coming soon — like the 165-grain AccuBond Long Range just announced and the 170-grain Berger EOL Elite Hunter (G1 B.C. .662) already on dealer shelves. Most hunters don’t absolutely need such long, heavy bullets for effective performance at responsible game-taking distances, but beyond 300 yards they do flatten trajectories, minimize wind deflection, and maximize retained energy. A high B.C. bullet makes it easier to hit should you misjudge the range. (Or you can just stalk closer and to heck with pushing the envelope.)

Read Next: The Best New Guns, Ammo, and Hunting Gear from SHOT Show 2020

Nosler representatives couldn’t tell me the B.C. of their 165-grain bullet yet, but we guesstimated it should be at least .650 G1 and approaching .70. With its case capacity (98.4 grains water compared to about 80 grains in a .270 Wby. Mag.,) the 27 Nosler should be able to nudge a 165-grain along at 3,100 fps, perhaps 3,150 fps. It will require a 26-inch barrel to reach this speed, but that will make this a superior long range performer and the fastest .270 extant. You might want to grab yourself a 27 Nosler unless…

Unless Sig Sauer’s new .277 SIG Fury is more your style.

Figure another 30 fps velocity increase for every inch of barrel added and a 24-inch launchpad should nudged that 140-grain to 3,240 fps. Clearly that won’t quite match the 27 Nosler, but that’s not surprising because the .277 SIG Fury case is the same length and diameter as the .308 Winchester. Yes, this is a short-action, small capacity case which demands we ask the obvious question: how can the little .277 SIG Fury shoot as fast from a 16-inch barrel as the larger .270 Winchester shoots from a 24-inch barrel?

The answer is higher allowed chamber pressure. Super pressure, if you will. The .270 Winchester’s SAAMI spec maximum chamber pressure is 65,000 psi. The SIG Fury’s is 80,000 psi. And to handle that, the SIG cartridge is built with a stainless steel head. The main body, however, is brass. This gives it the necessary elasticity to expand and seal the chamber while the stronger steel keeps the head from rupturing.

The pieces of the .277 Sig Sauer cartridge are assembled via an internal pressure ring of some kind near the base. I’m not exactly sure how it’s accomplished, but it involves plenty of pressure, I’m sure. The included photo of the model/mock up of this case is close but not exact.

To contain 80,000 psi pressures SIG has built a reportedly beefy rifle. It’s a bolt action looking quite a bit like an AR-15. In other words, unlovely. Hey, I’m sorry if I offend your sensibilities, but beauty is in the eye of the beholder and my eye has never beheld beauty in any rifle built with hard angles, holes, posts, adjustable combs and butts, etc. Such tools may be infinitely adjustable for precision fit and performance, but I’ll walk the woods and get my game with a more classic looking hunting rifle. But that has nothing to do with the actual performance of the .277 SIG Fury cartridge or rifle.

Read Next: 10 Great Guns That We Wish Were Still Being Made

You, your kids, and 90 percent of the shooters might love the SIG Cross rifle, in which case the .277 SIG Fury might be your baby. I handled a sample Cross and it felt precise, tight, remarkably adjustable for fit, and impressively light at just 6.5 pounds, only about 1.5 pounds heavier than the ultralight mountain rifles I’ve hunted with the past 30 years.

I did not determine the rifling twist rate of the Cross Rifle, but I’m guessing it will be faster than the traditional 1-10 inches of the .270 Winchester. About 1:8 would be my guess. That’s the key to each of these new .270 cartridges. The SIG and Nosler both require fast twist rifling to stabilize those long, high B.C. bullets.

By the way, the .277 SIG Fury arose out of SIGs project to build a light, belt-fed .277 machine gun cartridge and rifle for the U.S. military. I’m not sure if they’ve won the contract or if the testing is still underway, but the civilian bolt-action rifle and ammo should become available in 2020. Nosler’s .27 will be chambered in that company’s M48 bolt-action rifles.

Ballistic Comparisons and Other Factors

When choosing among these three .270s one must consider more than just ballistics. How long of a barrel are you willing to carry? Are you concerned about barrel life? Will you be able to find ammo? How much will it cost? Will you be able to handload once-fired cases? Will your favorite rifle brand and style be chambered in it? Do you prefer a standard-length action or short? A traditional stock or adjustable?

My impression is that traditionalists will stick with the good old .270 Winchester. Lots of familiar rifles are chambered for it, ammo is abundant, variable and inexpensive. The cartridge is a proven performer.

I also think extreme-range shooters with traditional to semi-traditional tastes will gravitate to the Nosler in a bolt-action rifle like the M48. I’m guessing many semi-custom brands like Fierce, Christensen Arms, Browning X-Bolts and others will soon be chambered 27 Nosler.

Read Next: Weird, Off-Beat, and Cool Guns and Gear from SHOT Show 2020

Shooters who love the look of AR rifles with folding stocks, adjustable combs and LOP, barrel shrouds, etc. will want to try the more radical-looking SIG Cross in .277 Fury. I further suspect, nay, predict — no deer, elk, or bear addressed by any of these is going to like them.

A natural question now is if other gun makers will chamber for the 27 Nosler and .277 SIG Fury. Time will tell. The 27 Nosler should be easy enough. Any rifles already chambering for any of the fatter magnums like the RUMs, Dakotas, or .338 Lapua should be fit to fit the 27 Nosler. As for the .277 SIG Fury, we’ll have to see if current actions are strong enough to safely contain those high pressures. And then what will barrel life be like? Lots of things still to be determined, but at least the .277-inch bullet size is getting some new life. With these two cartridges coming on line, our .270 selection has just grown from four members to six: 6.8mm Remington SPC, .270 Winchester, .270 WSM, and .270 Wby. Mag., 27 Nosler, .277 SIG Fury.