The Buck With The Hairy Eyeballs 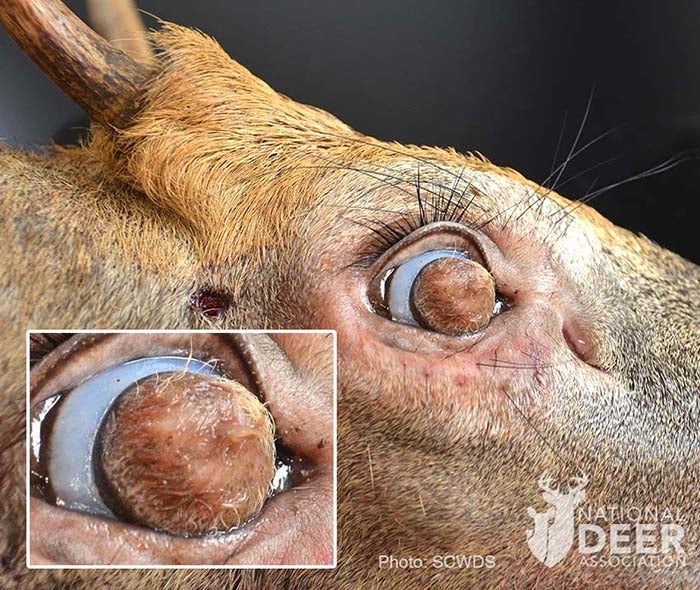 The buck with the hairy eyeballs tested positive for EHD. EHD
SHARE

It sounds like something out of a horror movie: a whitetail buck with hairy eyeballs. No joke. That’s what the Tennessee Wildlife Resources Agency discovered when a hunter reported a deer on the agency’s “Report Sick Deer” button of its website. The TWRA added the feature so hunters and citizens could report deer acting strangely, in an effort to curtail Chronic Wasting Disease and other diseases.

Lindsay Thomas with the National Deer Association gives a pretty harrowing account of this deer on the NDA site. Blood or weird stuff usually doesn’t bother me, but I have to admit that these photos freaked me out. I’m unsure if Wes Craven or M. Night Shyamalan could come up with this.

The deer was spotted in August 2020 near Farragut, a suburb of Knoxville in east Tennessee.

“The individual stated the deer was circling (in a street), had visible bleeding, lacked awareness of the people around it, and had something on its eyes,” wildlife biologist Sterling Daniels of TWRA said.

The deer was put down by local law enforcement and animal control, which saved the head for Daniels. He sent it to the Southeastern Cooperative Wildlife Disease Study (SCWDS) unit at the University of Georgia vet school to be tested for CWD and to see the eyeballs.

The deer tested positive for Epizootic Hemorrhagic Disease, which is transmitted by gnats, but was negative for CWD. Further examination of the eyes at SCWDS yielded this diagnosis: “corneal dermoids.” A thick layer of skin and dense hair covered each cornea. Researchers said the components of the eyes were normal other than the layer of hairy, thick skin.

Read Next: The 8 Weirdest Whitetails You’ve Ever Seen

I’ve seen deer with disgusting infections and healed wounds, and the gross cutaneous fibromas more commonly known as deer warts. But man, these hairy eyeballs take the cake. Read more about the SCWDS findings on this unique deer.