Lucky hunters from Illinois, Kentucky, and Ohio strike gold to tag the biggest bucks of their lives 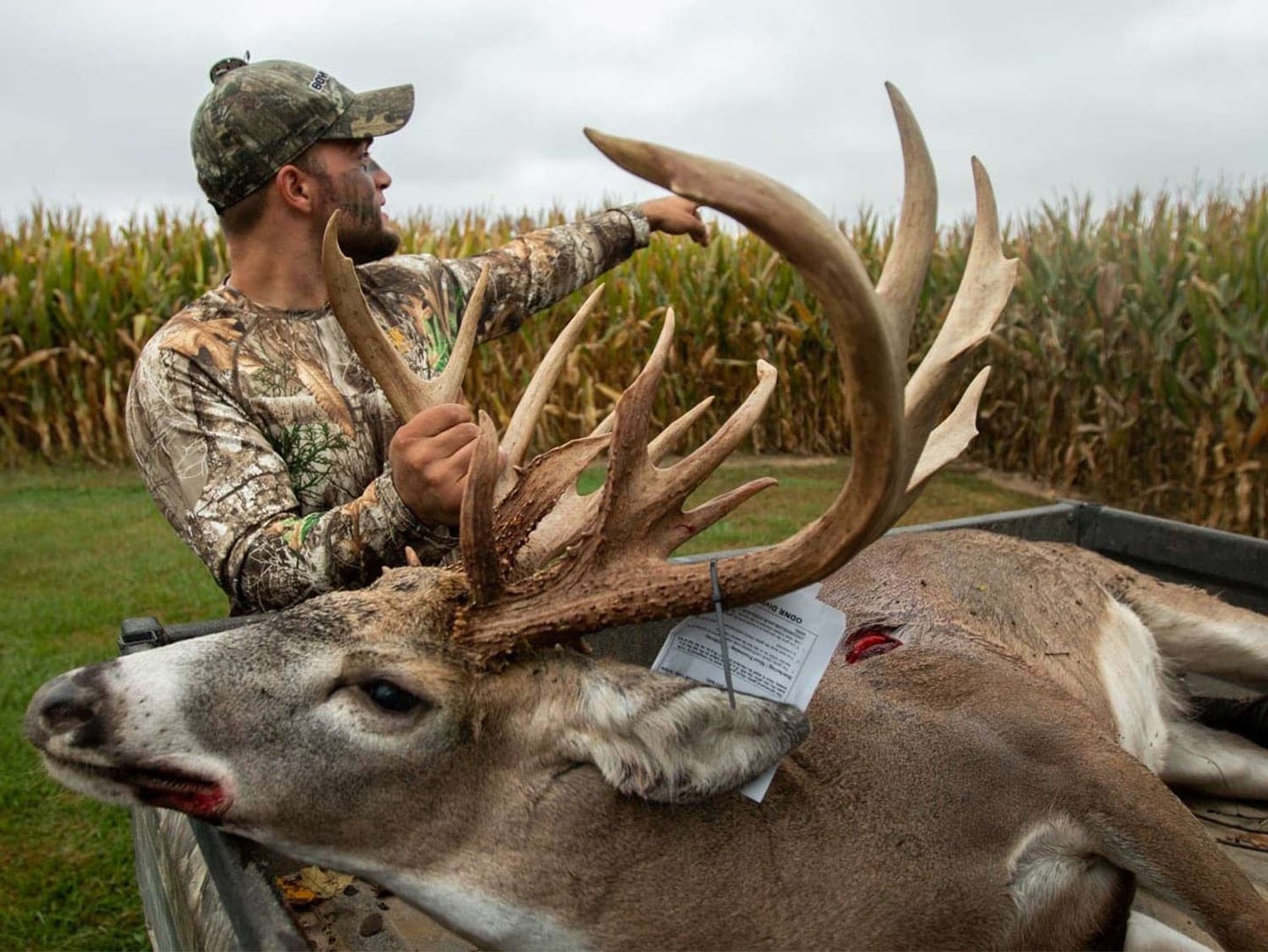 Bothman points to where he saw the buck during the hunt. Dakota Kellough
SHARE

Giant bucks captivate our attention like little else. And there were three studs tagged during the 2020 deer season that made the year just a little more bearable for the lucky hunters who got them. These are the tales of their hunts.

Dustin Bothman has been fortunate to hunt the same farm for the past 15 years. It’s a great tract of deer hunting ground and holds some good deer. Still, he had zero history with this giant prior to last summer. The stud showed up in July, and the Ohio bowhunter started crafting plans.

On October 11, he put said plans into action. Well before daylight, he eased toward his stand. He hoped the pre-dawn darkness would conceal his approach, but that didn’t happen.

“A bunch of deer blew at me as I was walking in, but it was in the pitch black of the morning,” Bothman says. “So, I just kept walking, hoping they didn’t know what I was.”

Finally settled into his spot, he waited for daylight. It was cool—typical for early October—but deer movement was slow. The woods seemed dead and showed little sign of life. He hoped the action would pick up before it was time to pack up. Eventually, it did.

The giant stepped into view.

“Once I saw my deer walking, I knew exactly who it was and where he was going,” Bothman says. “I glanced at his [antlers] once, and after that, I stared only at his body, trying to keep my composure. He tried to get downwind of me, and that led to a 32-yard shot opportunity.”

The buck quartered toward him, just enough for a good shot.

“When I drew back my bow, the one thing I kept reminding myself was that this was the moment that we hunt for,” Bothman says.

He released the arrow and made the shot. It entered the vitals directly behind the shoulder.

“I just didn’t know if I got good penetration or not,” Bothman says. “But once finding the first blood, I felt a lot better.”

Bothman didn’t immediately track the deer, but once he did, he found the buck almost immediately.

“The feeling of recovering and getting my hands on him…I’ll never forget that moment,” Bothman says. “It was emotional, and my mission was complete. I didn’t know what pushed this deer to our farm, but I was the most blessed man on Earth when it all came together.”

He says that despite killing a buck of that size, it won’t alter who he is as a hunter. He hunts for food, and for adventure. That will never change.

Scott Tucker and his son, Cody, have many things in common, but none quite as all-consuming as their love for hunting big Midwestern whitetails. The Tuckers have tagged some solid deer, but for the past few years, they’ve been following one buck in particular. Finally, in 2020, that buck turned into a giant.

“We have a lot of pictures of him from throughout the years,” says Tucker. “We knew he was all over the area. A couple of neighbors had pictures of him, too.”

Now a 6½-year-old buck, the deer had grown into a thing to behold. Tucker saw him twice in person throughout the summer, and hoped for another meeting once deer season arrived.

On November 11, his wish came true. It was around 50 degrees—not hot, but not cold either. And certainly not what you like to see during a rut hunt. Still, he had faith. It was prime time, after all.

Tucker eased along a low-impact entry route and climbed up into one of their Redneck blinds. It overlooks a good plot full of clover and soybeans, and adjacent to that buffet is about 60 acres of corn. The local deer had plenty of grub.

“I got in the blind about 2 o’clock in the afternoon,” he says. “By 3:30 or so, deer were starting to move. I had half a dozen does in front of me, with a couple small bucks, too.”

Around 3:45, he looked over his left shoulder toward a block of timber. He watched a doe walked out and head toward the plot.

“She walked down a trail, and if she’d stayed on it, would have walked within 15 yards of me,” Tucker says. “About 10 minutes later, I saw the buck. Of course, when I saw him, I knew he was the monster.”

The doe kept coming, and made it to within 20 yards. She paused where the trail split, then took the one leading away from him. About 40 yards from Tucker, she stopped and turned to look back toward the buck.

Likewise, the buck kept looking at the doe, and lip curled.

Everything was pretty tense, and the buck slowly milled around before committing to following the doe.

“I’d been watching him,” Tucker says. “I had my bow lined up. I’d scooted my chair back a little bit to make sure my limbs weren’t going to hit the blind.”

Finally, instead of following the doe, the buck took the other trail, and stopped, framed by Tucker’s open window. The giant offered a broadside shot just 17 yards from the blind.

“I had the sight right on him and let ‘er loose,” Tucker says. “The bolt blew right through him. He jumped, turned, and I could see the blood starting. He ran a loop. I watched him for about 100 yards. He kept wobbling, getting weaker and weaker. The last 10 yards, he got behind a bunch of brush, but I was pretty positive he was done.”

Tucker had been hunting alone, so he called his youngest son and asked for help. About 30 minutes later, he arrived, and the pair took up the blood trail. It was an easy track to follow.

“The closer we got, the bigger he got,” Tucker says. “He was built solid.”

Brian Davenport is a passionate deer hunter, and he’d been after a particular giant Kentucky buck for several seasons. The deer originally showed up as a promising 3½-year-old. In 2020, it blew up into a huge 6½-year-old whitetail.

Davenport has six years of experience hunting the area, so he had a good idea of how deer used the landscape, and where he might be able to ambush the buck. Even so, last September, he spent nine days hunting the deer. He only had one encounter, and it came on September 24.

The day started out with clouds, rain, and 60-degree temperatures. That might sound hot to some, but those are actually pretty desirable conditions for an early-season hunt in the Bluegrass State.

Settling into his spot, Davenport surveyed the scene around him. He glassed the rolling hills around his location, and even the big stand of pines behind him, but focused most of his attention on the food plot in front.

Read Next: The 22-Point, World-Record Doe

After a while, several does came out, and milled around in the open. They fed in the food plot, and then drifted off.

At 5:45, things got serious—the record-class buck entered the plot.

“He started walking away from me, and I almost fainted,” Davenport says.

Then, the buck turned back, and walked to within 40 yards of Davenport’s set up. The deer quartered away, so Davenport drew his bow, settled the pin, and launched an arrow.

The arrow struck true, and the buck took off. Eventually, the landowner arrived and helped Davenport recover the huge buck.

“Everyone was in shock,” Davenport says. “They were really happy for me. It was a dream to see and harvest a deer like that. But I’m going to miss going after him.”