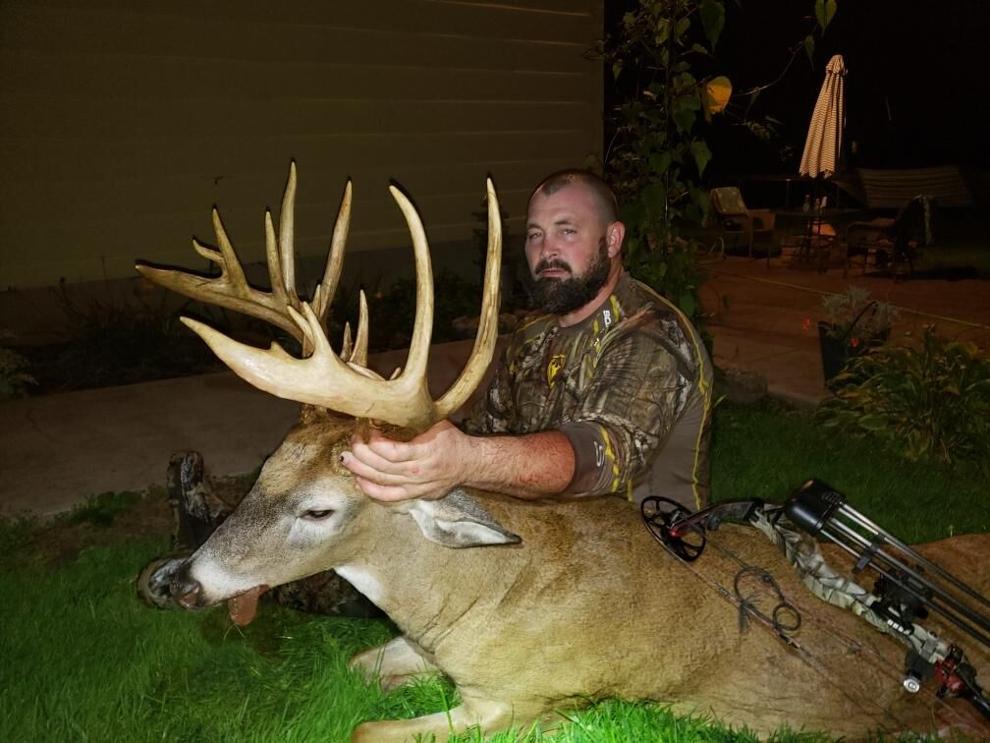 Scott McQueen of Gasport, New York, knew a heavy-racked whitetail was frequenting the farmland where he hunts in western New York. It was the same one he had been watching for three years now. The first time his trail camera captured the buck in 2019, the deer was a big 9-point. In the following years, McQueen watched him grow into a mature buck, even passing him in 2020.

“He turned into a really, really big-framed deer,” McQueen, 42, told Outdoor Life. “I ended up letting him go a bunch of times last year. The last five days of muzzleloader season he was in front of me almost every day. I was kicking myself in the ass all year for it. I’ve shot a lot of good deer, and I’ve even got a 160 on the wall, but nothing like him…I saw him basically on the last day hunting season last year. Of course, I spent a lot of nights wondering if I’d made a mistake not shooting him last year. He could get hit by a car, there are other neighbors around who hunt. But I was pretty confident he was in the area.”

When a big buck reappeared on camera this summer, McQueen knew exactly which deer it was. Its antlers were covered in velvet and still growing, but it was clear the young nine pointer had grown into a true giant since their last encounter. On Sept. 27, he pulled a card with daytime photos the buck, on the move around sunset. On the last day of September—the day before the bow opener—he pulled another trail cam card with another photo of the buck.

“I was pretty excited,” McQueen says, who hunted hard the first week of the season before taking a break for a few days. “I had been anticipating getting out there and hunting him all year.”

McQueen is a serious hunter who will keep shooting his bow right through rifle season, and the concrete and construction job he’s been working for the last 15 years is flexible enough that he can focus on deer season when the time comes. Once he noticed the farmers begin to cut the cornfields, and some surprisingly early signs of the rut—like a forkhorn already mounting a yearling doe—McQueen decided to get back into the field.

It was humid, with temperatures in the 80s when McQueen climbed into his treestand on a field edge. It was hot enough that he decided to hunt in his base-layers, and only hunt the last 90 minutes of daylight. As the sun set, McQueen watched a pair of does feeding in front of his stand. Then a smaller doe dashed out of some nearby cover—with the big buck on her heels.

“He came out tailing what I’m pretty sure was that same little yearling,” McQueen says. “It was like the full rut was going on. I was like, Wow. It kind of astonished me. I’d seen that happen before, but I didn’t expect him to come cruising out like that.”

The buck chased the little doe past his stand, working out to 100 yards. That’s when McQueen used his grunt tube to get the buck’s attention, grunting loud to cover the distance.

“He stopped and growled back at me. They saw another deer in front of me. He must’ve thought that was the one grunting at him, so him and the doe started coming back toward me.”

McQueen continued grunting aggressively as the buck closed the distance. When the buck stepped, broadside, into a shooting late at 40 yards and dropped his head for a bite in the cut cornfield, McQueen was ready. His arrow zipped through both lungs, and the buck took off across the field and piled up after 100 yards or so. McQueen was able to watch the whole thing unfold in just 10 minutes.

“I got that quick hot flash and that rush. You always get that adrenaline rush, but if you don’t control it you usually screw it up,” says McQueen, who spends most of his fall in the woods. “My little trick to seeing big bucks with a bow in your hand, or a gun, is to break the eye contact and gather yourself for a second before you even go back to trying to aim or do anything. Don’t sit there in a gaze of staring. Break the eye contact, take some breaths and get situated.”

By the time McQueen got the buck home, weighed (226 pounds, field dressed), it was late. The hot temperatures forced him to butcher the buck that night, and he didn’t get to bed until well after 4 a.m. After a nap the next day, he finally got a chance to look at the pictures he’d taken, and let the success of the night before sink in. When an official scorer came to measure the buck, he taped it out at a green gross nontypical score of 184 4/8 inches, and a green net score closer to 173 inches.

Niagara County is known for producing big bucks like the one McQueen killed this fall. The new state-record nontypical archery buck was taken in the same county last November; that deer measured 214-plus inches.

“Western New York has superior soils that help deer get heavy body weights and large antlers,” Ryan Rockefeller, a New York big game biologist told the Buffalo News, who first wrote about McQueen’s hunt in an Oct. 31 column. “The key is to look at where agriculture exists. “Age is probably the most important ingredient in the big buck recipe. Over the past several decades, hunters have been tending towards passing on younger bucks.”