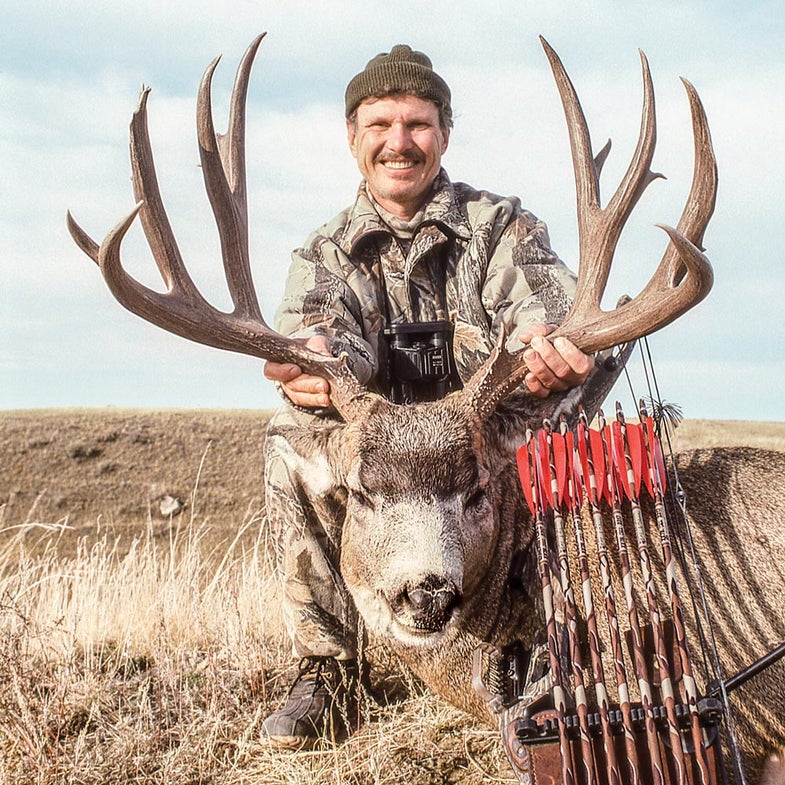 The author with a record-book buck at the end of an hours-long stalk. Courtesy of Chuck Adams
SHARE

Some say that, compared to whitetails, mule deer are dummies. You could have fooled me. I thought of that myth as I lay on my belly and peeked at a giant muley buck bedded 35 yards away. I had crawled across an open yellow-grass plateau for more than two hours, and now I was pinned after the massive 8×9 stood, strolled 10 yards, and bedded again on an elevated hump of dirt. One wrong move and I’d be busted.

I have had the good fortune of shooting more than 50 mule deer with a bow, 32 of which made the Pope and Young record book. Four scored above 200 points. In my experience, muley bucks of 5½ years or older can be considered a separate category of this animal.

Young mule deer do tend to be calmer than whitetails, which seem to walk on eggshells from birth. A 3 ½-year-old muley buck might stand and stare as you drive or hike by—that’s where the “dummy” reputation comes from. Such a young buck can have wide antlers and look big to a whitetail hunter. But he’s still a baby, with much to learn. A transformation happens by a mule deer’s fifth year, especially on public land, where I normally hunt. They grow huge headgear—and become amazingly adept at avoiding humans. You cannot underestimate the challenge of hunting a top-tier mule deer. But here are four things I’ve learned to help even the odds.

1. Walk With Your Eyes

Almost all mule deer live in semi-open country. The prairies I often bowhunt in Wyoming, Montana, and Alberta can look like a moonscape. The best way to locate a large buck is usually with extended glassing. Like most big game, muleys become more sedentary as they age. They also tend to bed in more remote places, where they rise periodically to feed without wandering much. Unlike whitetails, mule deer move about randomly from day to day within a large home territory. You should glass from high ground with a quality 10X binocular plus a compact spotting scope. This strategy will show you plenty of young, mediocre bucks in decent country, but once in a while a real “gagger” will show up. Then it’s time to stalk.

Official statistics from P&Y show that the average record-size whitetail buck is arrowed at about 19 yards. The average record-size mule deer is shot at slightly less than 40 yards. Occasionally, a water hole or alfalfa field can allow for stand-hunting mule deer. But you have to hunt most mega bucks on foot. Adjust your thinking­—and your practice routine—for longer shots, and you’ll prevent a rude awakening when a giant buck finally appears.

Camouflage works. Yet, many whitetail archers blow it with their clothing choice on a mule deer trip. Most Western habitat is quite light in coloration, especially compared to Eastern whitetail haunts. If you show up wearing deep-woods camouflage, you will stand out like a black blob on the prairie. Realtree, Cabela’s, and many others offer light-colored Western camouflage patterns. Take advantage of them, and you’ll be able to hide much more effectively on sun-washed slopes.

4. Stick to your Stakeout

If you bump a mule deer buck, you still might have a shot if he’s young enough. But a big boy won’t stand around after he’s bumped. The slightest sound or movement suggesting danger will send him into instant high gear.

I have to laugh at the idea of getting a bedded whopper buck to stand up by tossing a rock, whistling, or otherwise getting his attention. No matter what creative ploy you try, he’ll usually leave his bed like a hair-colored rocket. The best way to get a shot is to wait and let the buck stand on his own.

Knowing all this from experience, I lay facedown and hidden as the giant buck chewed his cud in plain sight. Three hours passed and muscle cramps set in. But at 5 p.m., the deer started swiveling his head and shifting his body. At last, he stood, looked toward me, then angled away and dropped his head to feed.

I yanked the arrow back as I rolled to my knees, and I dumped the bowstring when my 40-yard sight pin settled on his heart. A split second later, I watched one of my best-ever mule deer sprint 50 yards and flip tail over teakettle in a cloud of dust. The gorgeous rack measured 31 ½ inches wide, with an official net score of exactly 203 and a gross score just under 210. Such animals are rare no matter where you hunt.

An average mature mule deer measures 22 to 24 inches between alert, forward-cupping ear tips. If the rack spreads beyond the ears, he has big-buck potential. But more important to mega-buck status than the spread are tine length and mass.

A true giant has four typical points per side that average more than 8 inches above each fork. Main beams are usually 20 to 25 inches long. For reference, the distance between the middle of a broadside mule deer’s eye and the tip of his nose is about 8 inches. The forehead of a buck facing you is almost exactly 4 inches wide between the inside edges of his eyes. Each ear measures about 9 inches from base to tip.

Many deer have uneven tines. But if a trophy buck has short “crab claws” in front, he has to make up for this with deep back forks. Unlike whitetails, large mule deer seldom have brow tines over 3 or 4 inches; some have no brow tines at all.

Outsize mule deer grow massive antlers. The four record-book circumference measurements per side usually tally to between 16 and 20 inches, with the circumference directly above each burr commonly 4 1⁄2 to 6 inches.