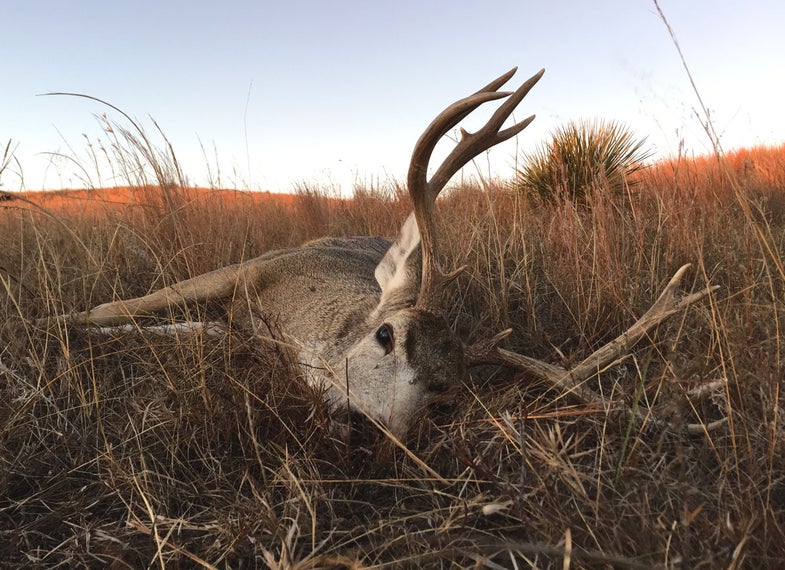 If you’re sick of hearing all the statistics about how more women are embracing hunting as a hobby, you’re not alone. The trend is a good one, certainly, but the story isn’t new (see below). Personally, I’m ready for so many people to quit remarking on women as novelties in the hunting community and just treat us as hunting buddies. The guys I hunt with already do—which is why I hunt with them. But I often run into people in the larger hunting world who don’t know what to make of me.

So when the good folks at Browning invited me to participate in an all-women’s deer hunt in Nebraska last month I was excited, but also a touch wary. Would I be expected to test pink-accented camo? What rifles would we be shooting? Would the outfitter take our group seriously?

Regardless of those unknowns, the hunt itself was too tempting to turn down: opening week of rifle season in Nebraska’s Sandhills. After chasing turkeys in the region this spring, the Cornhusker State joined my list of favorite states to hunt. In part because of the unique terrain, but also because the place is packed with wildlife. The Sandhills hold both whitetails and mule deer—the latter of which I’d hunted but never taken—and our tags would be good for either species.

I signed on for the hunt, as did my best friend Kali Parmley of Petersen’s Hunting. What reservations I had vanished after a day in camp.

It’s a hike to get to Goose Creek Outfitters, but well worth the trip. The outfit is located outside Elsmere—more than four hours from any major airport. Our crew of six flew from three different time zones to meet in Rapid City, S.D., then drove southeast, bisecting Badlands National Park before dropping down into the Sandhills.

Opening morning found me parked on a bluff overlooking the Dismal River, this time an hour’s drive south of my warm bed. Parmley and I had ridden down with our guide, Eric Wegener, stopping only to ensure our rifles were still on target after our travels.

We were hunting with the Browning X-Bolt Micro Midas, chambered in .243 Win. I’m a fan of Browning’s X-Bolt platform, but I’ve also got a sturdy 5’8″ frame. The Micro is a compact model designed for “smaller shooters,” and I wondered how two other hunters in our group (both of whom have several inches on me) would fare with it.

It was hard for me to raise an eyebrow at the diminutive rifle for long though—it’s a lovely gun that cycled smoothly and, perhaps best of all, weighed just 7 pounds with the Leopold scope. This was a welcome feature, since I spent much of my week combing hills during the hottest hours of the day.

But that first morning I tore into a packet of handwarmers, pressing into the shelter of a cedar tree and pulling on all the extra layers I had stuffed in my pack. (None of which were pink, for the record.) My vantage point was exposed to the early morning wind, but the lookout allowed me to watch a few young whitetails sprint out of the public land to the east and browse along the Dismal’s oxbows.

Meanwhile, Parmley and Wegener had busted a big muley buck and a doe while opening the gate one valley north of me. They lost track of him, but Parmley located him again within the hour, bedded under a cedar tree. The catch? He had hopped a fence and was now snoozing on the neighbor’s property. She decided to wait him out, so Wegener relieved me of my post and we went across the river to hunt on foot. Almost immediately he spotted a mule deer buck, also bedded under a cedar. As we snuck closer, we noticed the doe tucked in beside him.

He was a fine buck, but young, and I had barely begun hunting. So we backed out and I joined Parmley to keep her company and shoot video while Wegener scouted elsewhere. I won’t rob her of her chance to tell the story of that hunt, but I will say that it was an exercise in extreme patience. It was also one of the most fascinating deer hunts I’ve witnessed, at least as far as rutting behavior goes: There’s another half hour’s worth of footage of the loafing buck that I didn’t cut into the video above, including a 30-second lip curl. He was clearly exhausted from chasing and breeding—but not tired enough to keep him out of trouble.

The three of us spent the warm afternoon searching for a second big muley that Wegener had spotted, but weren’t lucky enough to locate him again. The next day Wegener and I returned to the Dismal, covering a good eight miles as we glassed our way through the hills.

We were fighting against the Supermoon and temperatures in the 60s, but even scouring every cut bank and shade pocket with our binoculars revealed nothing. The last hour of light found us posted on opposite sides of a grassy rise, hunting back to back but with a hundred yards and a hilltop between us. I watched a young muley buck cruise toward the river. Wegener had a run-in with a mature whitetail, but he proved warier than the mule deer we’d encountered: he busted us and vanished into the cedars.

As we hiked back to the truck, my phone buzzed: Ashley Vanderhoof of SPG Outdoors had just killed a buck—her first. Parmley helped her call the shot, and he only ran a handful of yards before tipping over.

The third day found me hunting closer to camp with Shaundi Campbell of Browning. Parmley tagged along with her shotgun, dropping a single quail when we flushed a covey at an abandoned homestead. The day was hot though, and the deer nowhere to be found.

Wegener and I teamed up again for the fourth and final day of our hunt (it also happened to be my birthday). The entire day stretched ahead of us, but as soon as we passed through the first gate, a mule deer doe and buck skidded to a halt in front of us. The buck wasn’t an old deer, but he was mature enough to sport four forks, and that was enough for me. When he ran the doe off again, we raced after them, using the hills for cover.

The first time we crawled into position, the deer was standing just inside 300 yards—a long shot considering the caliber and my persistent buck fever. I decided against it. Falling back and circling to a closer hillside closed the distance to 150 yards. During all this sneaking and stalking and crawling, the buck never took a step. He remained frozen, torn between the hot doe in the pocket between us and a younger buck leading a gaggle of does 75 yards from him. They crested the horizon during our stalk, stopping short when they spotted both us and the buck we were after. I hoped they wouldn’t spook—they were muleys, after all—and they didn’t. It was as if they had arrived to watch the standoff.

It was a long wait, or at least it felt like it. The buck remained quartered to me, unmoving, and I held on his shoulder for ten minutes, trying to remain calm. Finally, he took a few hesitant steps. I slapped the trigger, missing over his back. He spooked and ran 20 yards as I cycled the bolt. This time I didn’t give myself a chance to overthink things, and the deer fell where he stood.

After three days of hard hunting, this morning hunt had lasted half an hour. I reached him just before the sun did, the moon sinking below the hill beyond. Wegener jogged off to retrieve the truck, leaving me alone to admire my first mule deer—my birthday buck—as the light washed over him.

After I tagged and gutted him, we lifted the deer into the pickup and drove to the check-in station (read: the local bar).

The rest of the girls trickled into camp throughout the day—each, miraculously, with a buck in the truck. Campbell turned up midday with a whitetail, her first whitetail and the only whitey of the trip. (She’s hunted Utah mule deer since she was a kid, and, after chasing them all week, has declared their eastern cousins to be a frustrating pain in the ass.) Laci Warden of Winchester rolled into camp with a good mule deer buck while we were eating lunch.

That last day in camp turned into the best birthday I can remember in a long time. I spent the afternoon packaging meat, first my own and then the others’, drinking beers, and skinning skulls. Karen Mehall Phillips of American Hunter showed up after dark with the sixth and final deer, a muley. Despite the long drive and flights to catch the next day, we wouldn’t let her drop the meat at a processor. Instead, everyone formed an assembly line for skinning, slicing cuts, and packaging meat and made short work of it. There were breaks for bourbon (I received a camo flask and a bottle of Bulleit as gifts), dinner, and cake.

The night ended with our whole group—guides and hunters—gathered around a pot of simmering skulls as if it were a campfire, cracking jokes, drinking beers, and singing. It was then that the guys of Goose Creek admitted they, too, hadn’t known what to expect when they heard half a dozen women would be descending upon their camp.

But we proved that we could work hard and play hard. We hunted through lunch, problem-solved knocked scopes, blew stalks, and when the time finally came, got to work in the skinning shed.

As we turned in for the night Wegener freely admitted—almost as if he couldn’t believe it himself—that we were, without question, the most fun group of hunters with whom he’d ever shared a camp.