After Being Barred from the Family Deer Camp, Beginner’s Luck with a 215-Inch Iowa Buck

During her first deer season ever, Brooklynne Rude killed a buck that most hunters only dream about 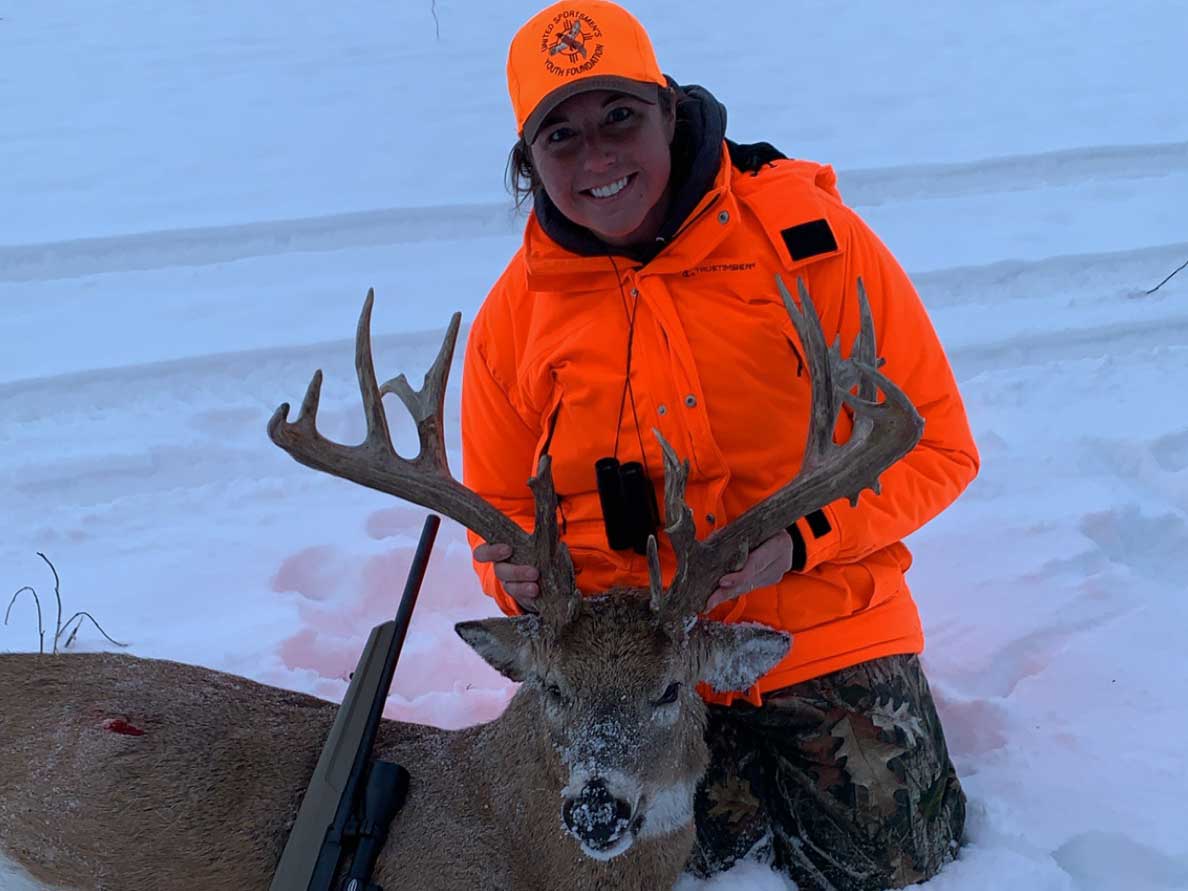 When you’re a kid growing up in the Midwest, deer hunting is generally part of your life. For Brooklynne Rude of Ankeny, Iowa, this was certainly the case. Her father, Brock, has hunted whitetails as long as she can remember and her brothers Mitchell and Nick both started hunting when they were about 10 years old.

Rude was always excited to see what the guys brought home from deer camp, and helped with processing the deer into steaks and ground venison. But as a young girl she had yet to develop a desire to hunt deer herself. She did, however, appreciate the family tradition and was eager to be a part of the post hunt.

As Rude grew into a teenager, however, she started to get the bug. Almost every Sunday, her family would go to her grandpa’s farm, where they would enjoy a trap-shooting session.

“It was fun to compete against my brother Mitchell, who was very good at trap shooting,” Brooklynne says. “This was the time of my life when I first became really interested in firearms and shooting, which ignited my desire to go deer hunting.”

Unfortunately for Rude, the rules of the deer camp prohibited any “girls” from participating in the hunt. So for the time being, she had to remain an observer of the family tradition of deer hunting. Despite being barred from deer camp, Rude’s desire to hunt whitetails didn’t wane. If anything, her yearning for a chance to hunt deer grew, especially after her dad shot a 16-point in Ringgold County in 2003 that scored 181 4/8-inches.

“It was actually my boyfriend’s interest in deer hunting that finally got me into the woods this year,” says Rude. “He mentioned that he really wanted to try deer hunting this year, and I said that I did too.”

So the young couple completed their hunter’s safety course a couple weeks before the season started. Then they began preparing for the state’s second regular gun season, which started Saturday, Dec. 12. Preparation included buying gear to hunt with and practicing with their deer rifles.

Rude didn’t actually have a rifle of her own to hunt with, so her boyfriend, Nick Knapp, let her use his .350 Legend that he bought in early October. He used a shotgun that Rude’s dad had given her. Now they just needed a place to hunt.

After a little searching, Rude and Knapp found a small tract of land to hunt, not too far from home in Polk County. The property consisted of a pasture, beanfields, and strips of timber. Fortunately for them, the property already had an elevated blind where they could sit on opening day.

The evening just before the Saturday-morning opener, six inches of snow dropped on the frigid Midwest farmland. Despite the snow and cold awaiting the new deer hunters, Rude and Knapp walked through the new fallen snow to the blind and climbed inside. The walls of the blind helped block much of the wind and falling snow. All they saw on opening day, however, were a few does passing by on the adjoining property.

The second day of that season brought better luck, however. After a cold morning hunt on Dec. 13 with zero deer sightings, and a 1.5-hour lunch break, the couple returned to the blind around 2:30 p.m. The deer started moving two hours later. Knapp tried a fawn call and, to his surprise, a cluster of deer emerged from the little patch of timber to their left and walked right to the blind. All told, there were nine does and a four-point in the group.

“I was being patient waiting for a big doe,” Rude says. “I saw some young does and, finally, a big adult doe came by just 20 yards away.”

Careful aim and a double-lung shot dropped the doe after she ran about 40 yards.

“This was my very first deer ever, and I was super excited and shaking,” Rude says. “We didn’t know how to field dress a deer, so my dad and brother Mitchell came to help and show us how to do it.”

The couple hunted both morning and evening on Monday, but saw nothing. On Tuesday, Dec. 15, Rude went hunting in the morning by herself. She had to leave by 9:30 a.m. for work, but she was optimistic about the evening hunt. The weather was cold, but the wind was virtually non-existent as Rude made her way back to the blind that afternoon around 3:30. The entire week had been frigid, and snow was still on the ground.

While quietly walking in on the snow, Rude spotted a big buck about 175 yards away, and feeding in the beanfield on adjoining property.

“I was only about 15 yards from the blind when I spotted the buck, but I didn’t want to keep moving and chance spooking it, so I sat right down on the ground,” Rude says. “I watched him for a few minutes and then decided to use a tube call to make an estrous doe bleat.”

To her dismay, however, the buck threw up his head and looked in her direction before bolting off into the timber. Rude climbed into the blind, and Knapp joined her about 15 minutes later. She filled him in on all the details of where the giant was and where he ran after she called.

The excitement of the buck sighting took all the bite out of the cold temperature. The couple remained hopeful that they would still get a crack at the enormous buck. And they did—just 45 minutes later, Knapp spotted the same buck about 150 yards away, headed in their direction. The deer was just moseying along, and stepped onto the property they were hunting.

Knapp told Rude to shoot, but she wasn’t comfortable with the shot the buck presented. They temporarily lost sight of the deer and thought he had gone on to the next property. Then they heard something, and the buck materialized in front of their blind just 70 yards away in a small opening in the timber. The buck was walking from right to left, but stopped broadside in the clearing just long enough for a clean shot.

Rude got down on her knees so she could shoot through the window of the blind. She placed the crosshairs of the Weaver scope on the buck’s vitals, took a deep breath and exhaled, then gently squeezed the trigger, just like her dad had taught her.

With the report of the rifle, the buck bolted before piling up just 30 yards from where he stood at the shot.

“I was shaking so bad I couldn’t control it,” Rude says. “We stayed in the blind for as long as I could stand it, and about eight minutes later we climbed down to go look at the buck.”

When the pair reached the deer, all they could do was gape. Brooklynne Rude’s buck had 28 points, a 23-inch inside spread, and a green score of 215 inches, according to her dad and his hunting buddy.

“I thought it was funny, because I had told my dad, ‘I’m going to laugh so hard when I shoot a monster buck because you guys won’t let me go to deer camp,’” Rude says. “I was able to prove myself as a deer hunter, and this has been an experience that I’ll cherish forever.”

For years, Rude’s dad has held the family record for the biggest buck. But the torch has been passed from father to daughter.

“The king is dead,” Brock said. “Long live the queen!”