Best Bass Lures: These 29 Baits Caught The Most Fish During the Bassmaster Classic

Which lures performed under pressure at this year’s Classic? We asked 11 championship anglers about the baits that kept them in the strike zone 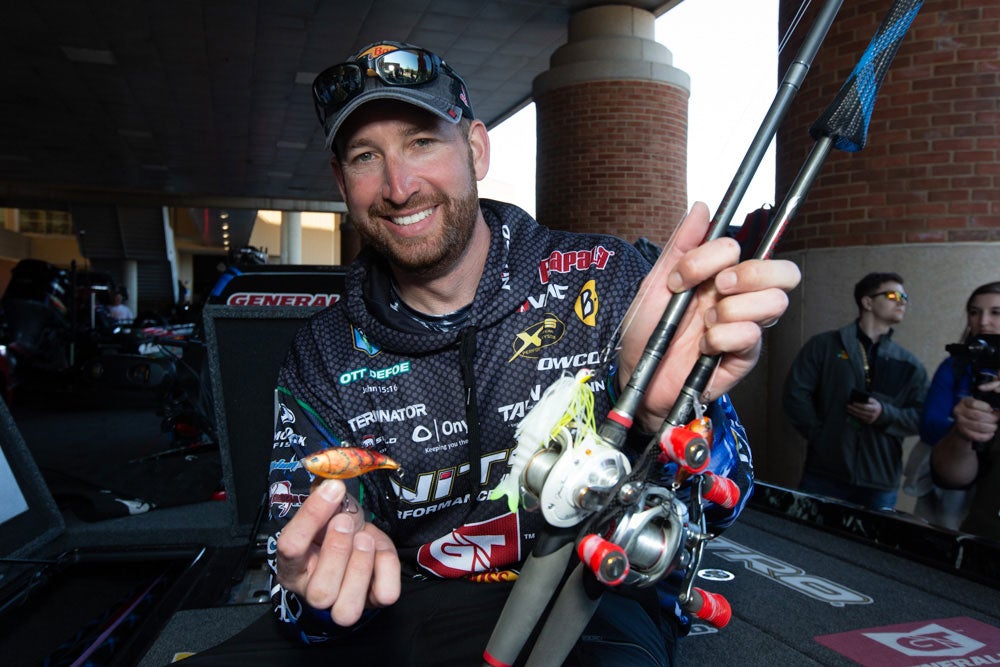 Rising and falling water. Warming, stained and clearing water. Lots of rain and post frontal conditions. All were in play at the GEICO 2019 Bassmaster Classic presented by DICK’S Sporting Goods. From March 15 to 17, the Tennessee River system proved a formidable foe for the 52 best anglers in the sport, making getting into the Super Six the most challenging feat of them all. With the best bass lures in hand, these pros still managed to pull in their limits.

In the end it was hometown favorite Ott DeFoe who was joined by his family in the winner’s circle on Championship Sunday. The week in Knoxville turned out to be a crank-fest, with lipped and lipless lures of all kinds producing best for the top finishers. Check out the choices in this Classic gallery of classic springtime baits. 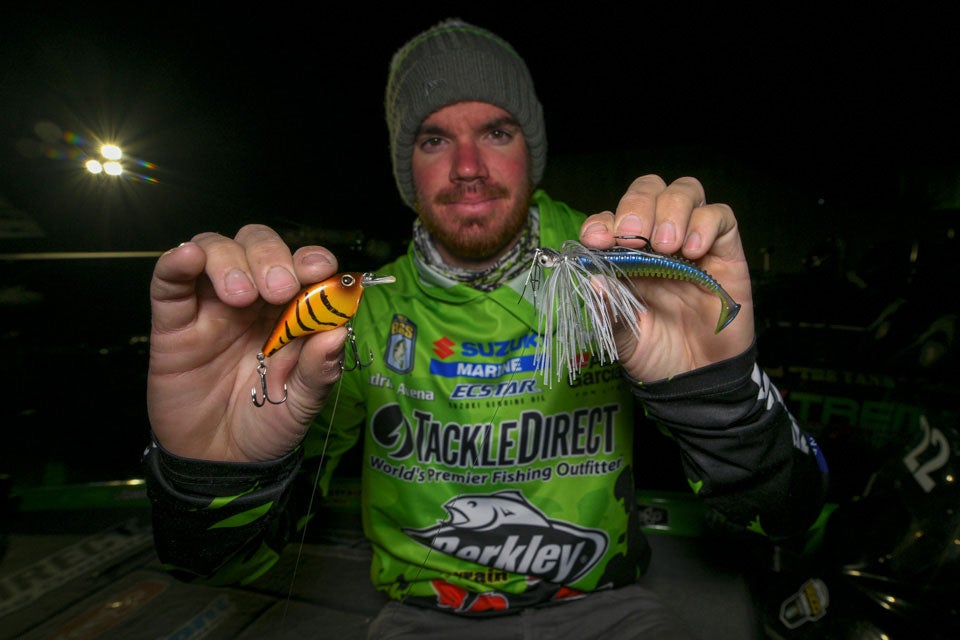 A 3/8-ounce Z Man/Evergreen Chatterbait Jack Hammer, Clearwater Shad, with a Berkley Powerbait Power Swimmer Swimbait, Sexy Shad, was a top producer for Adrian Avena. He also used a Berkley Frittside designed by crankbait guru David Fritts. The flat sided crankbait is designed to combine the better of two worlds. “It casts farther and better than balsa without losing the unique action.” The lure will be available in late summer, but you can find more crankbaits here.

Chris Zaldain with two swimbaits he used all week.

Chris Zaldain held nothing back, going for the win from the beginning. The entire week he threw 6- and 8-inch Megabass Magdraft Swimbaits, Albino Pearl Shad, featuring a big bass design that combines advanced engineering of a hardbait with smooth movements of a softbait. To prolong the bait’s time in the strike zone, he added a 1/16-ounce nail weight behind the single treble hook. He also used a personally designed 3/8-ounce Santone Lures Z-Spin Head with a 5-inch hollow belly soft plastic trailer. 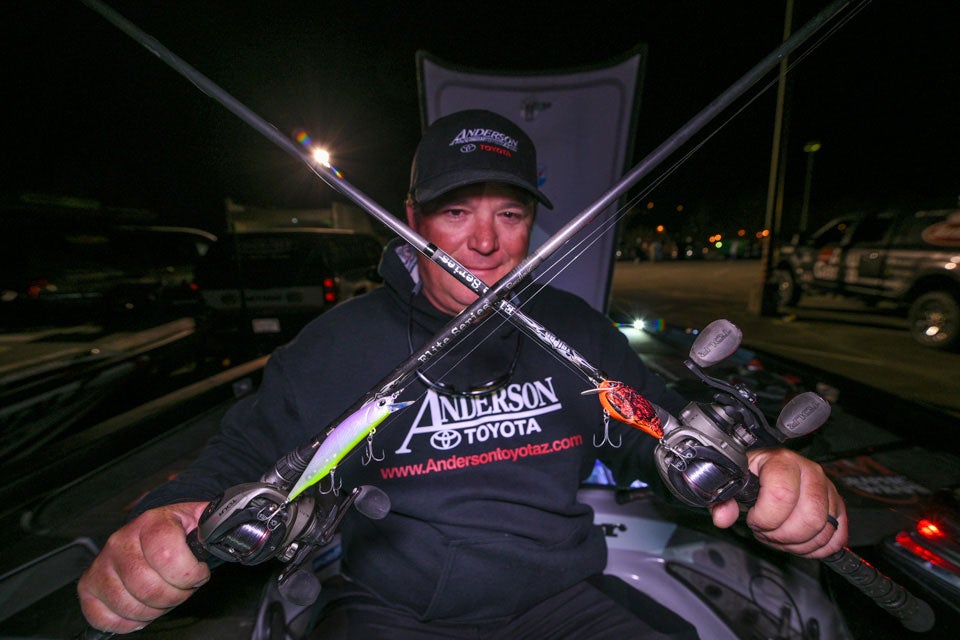 A crankbait, jerkbait and jig were top choices of Roy Hawk. 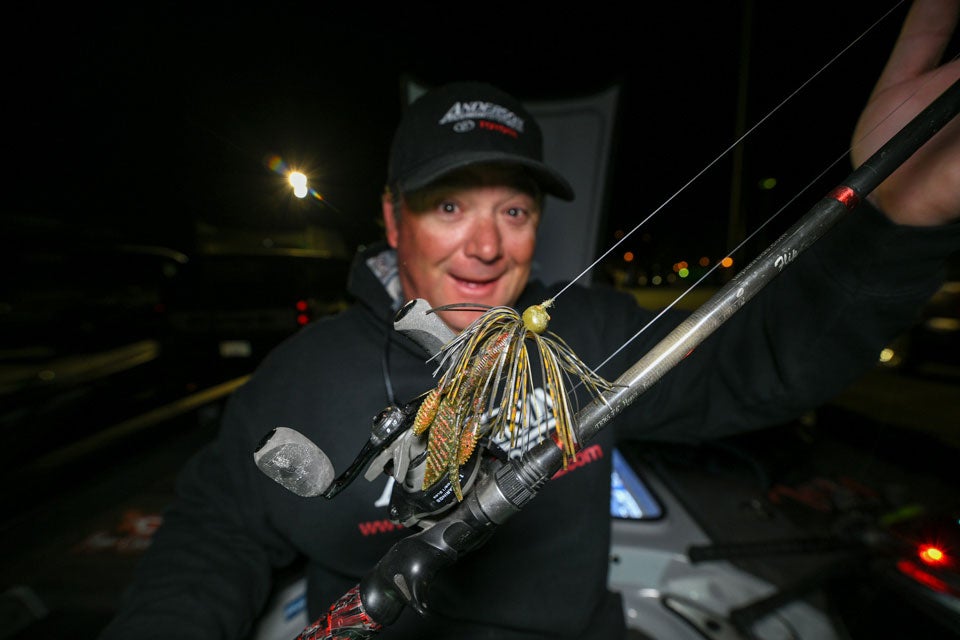 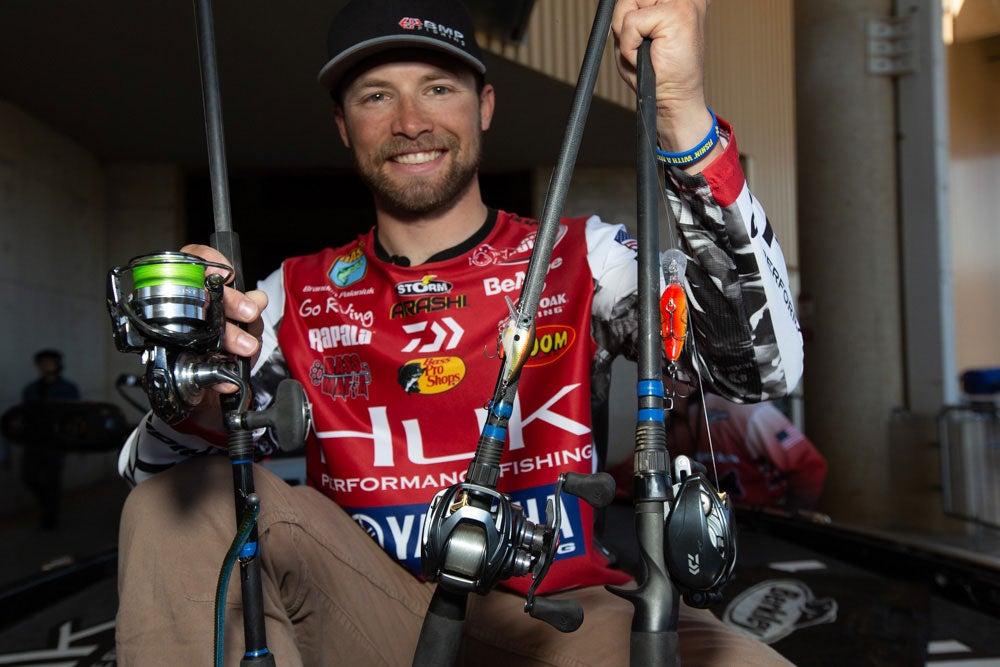 Brandon Palaniuk shows off a trio of strike appeal lures.

A trio of baits produced for Brandon Palaniuk. A Rapala Balsa Extreme BX Brat Squarebill, Bone Craw, and modified with a marker for added strike appeal, was a top choice. So was a Rapala DT6, Brown Crawdad. He also used a 6.5-inch Zoom Z3 Trick Worm, Z3 Edge, rigged on a 1/4-ounce shakey head. 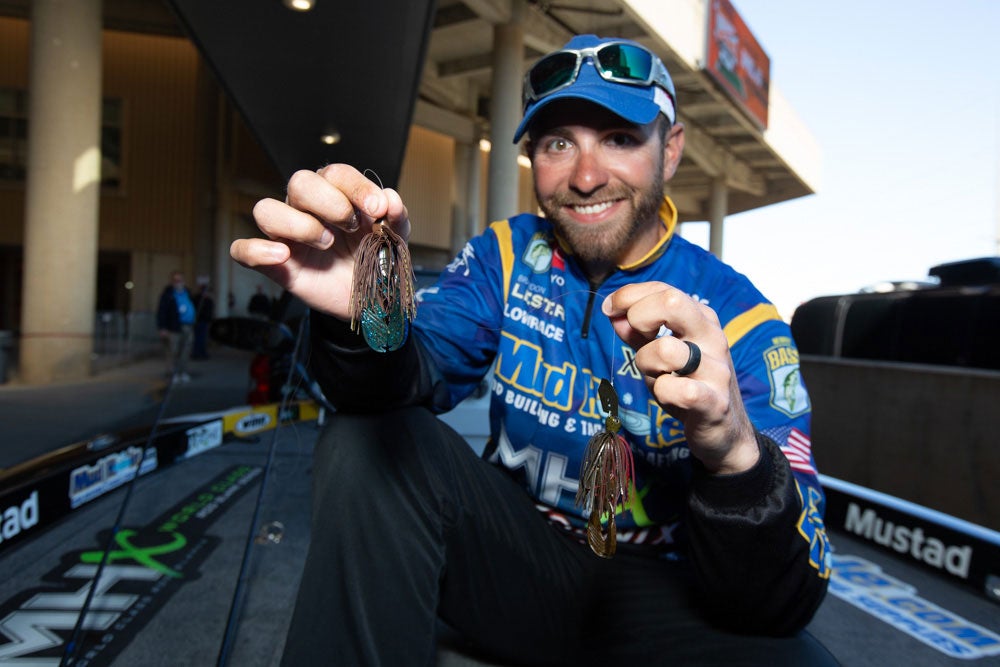 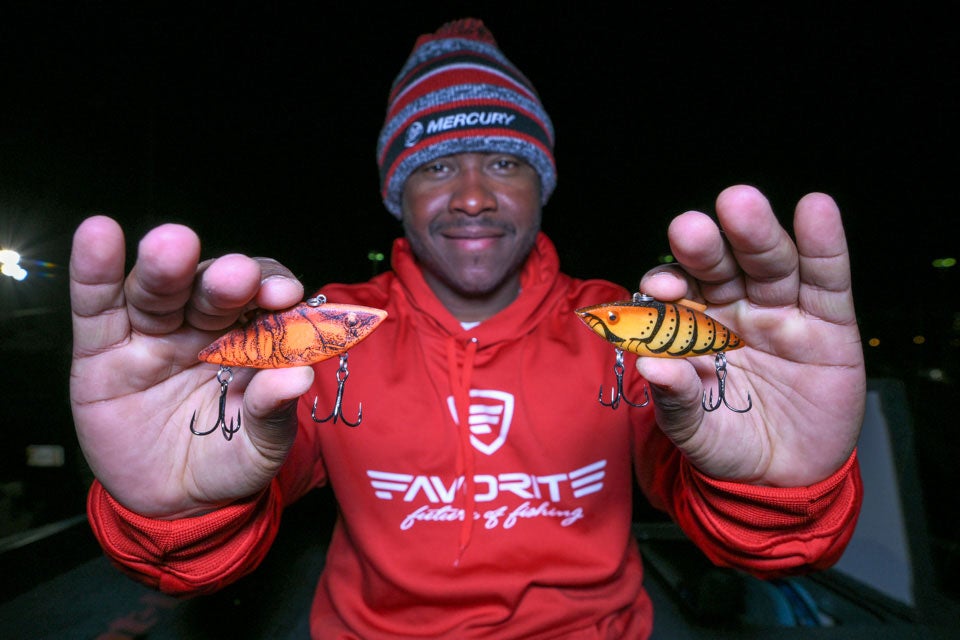 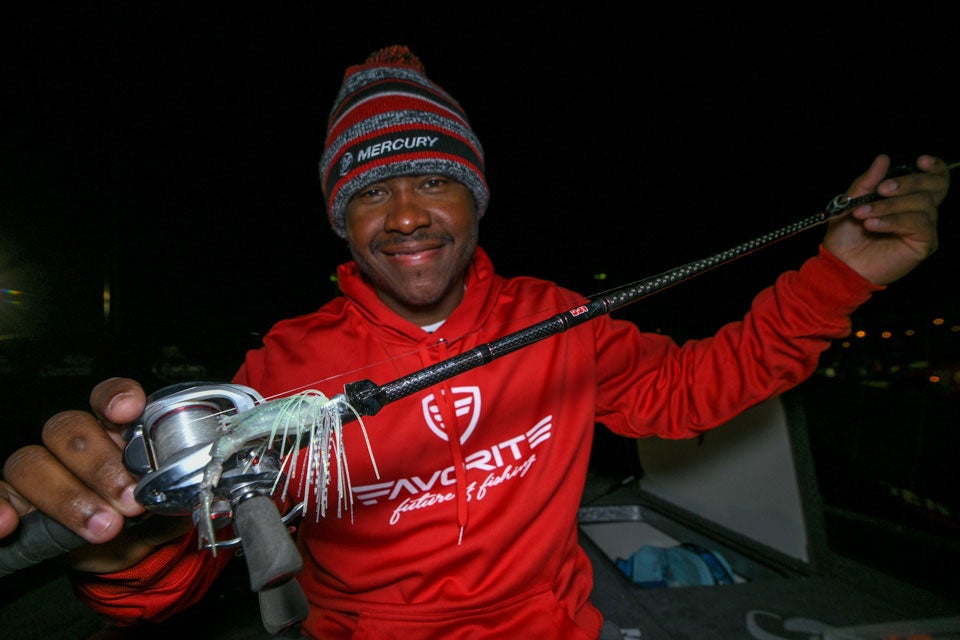 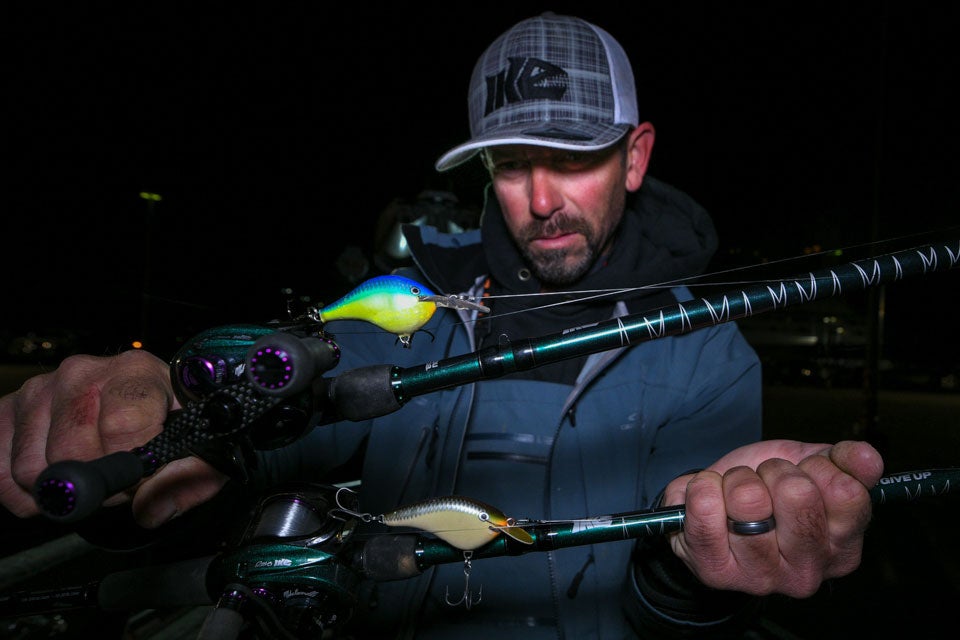 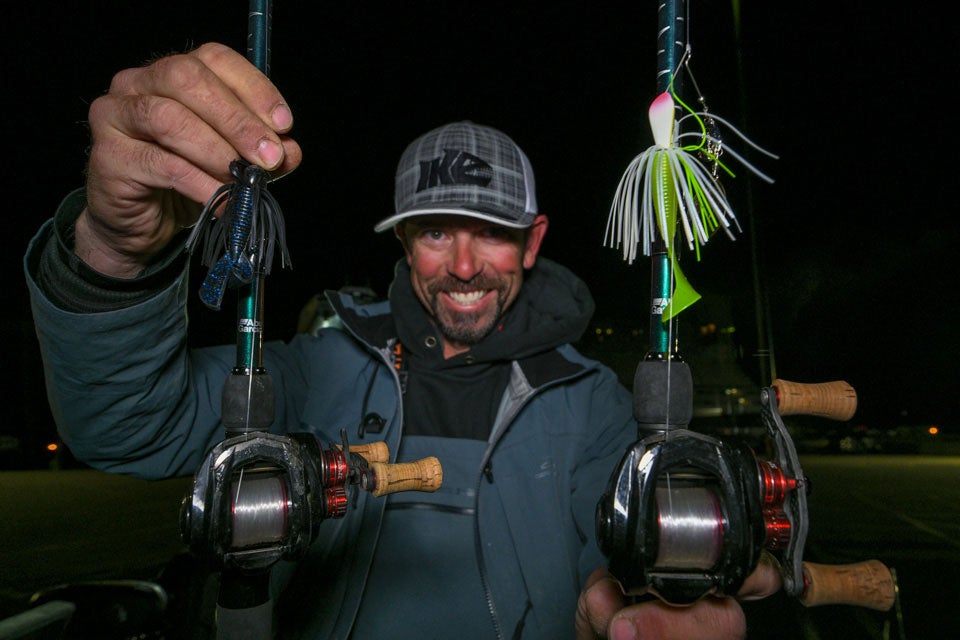 Michael Iaconelli with lures used in his second Bassmaster Classic. 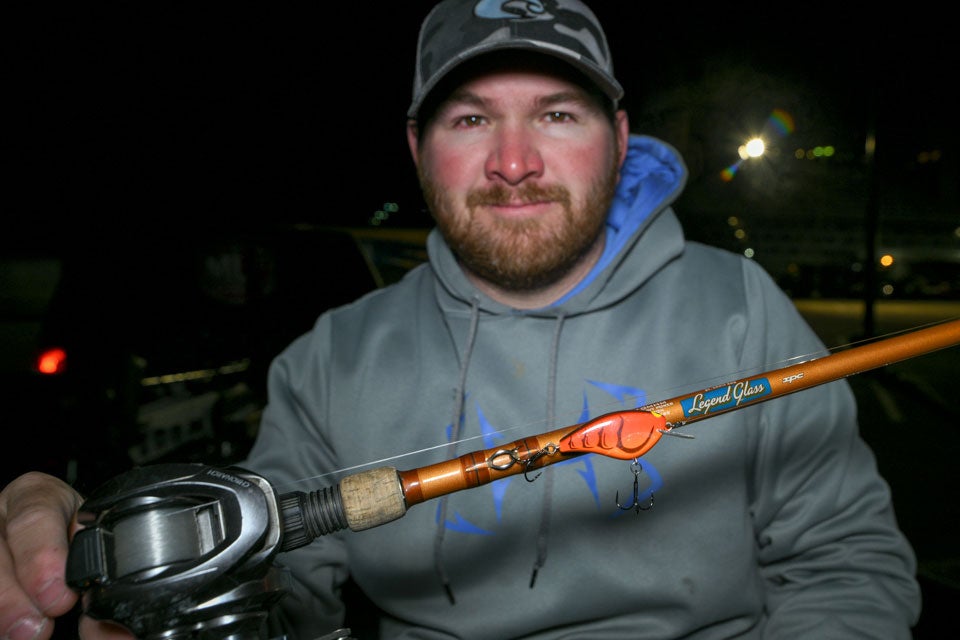 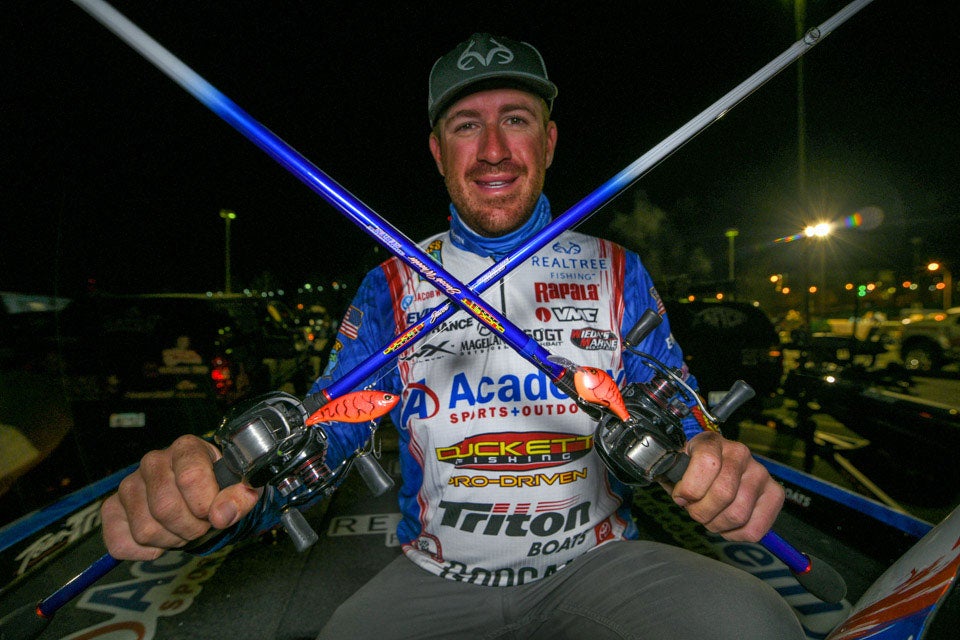 Throughout the week, Jacob Wheeler rotated through hardbaits for a mixed bag of largemouth and smallmouth. A custom painted red craw Storm Arashi Vibe was a top choice. The lipless crankbait features a slow-speed, subtle vibration and sound, making it ideal for lethargic bass encountered in calm wind and post-front conditions. A Rapala Ike’s Custom Ink DT6, Ike’s Red Demon, was another choice.