With a rough score of 201 1/2 inches, Preston Lair's buck could set a new county record 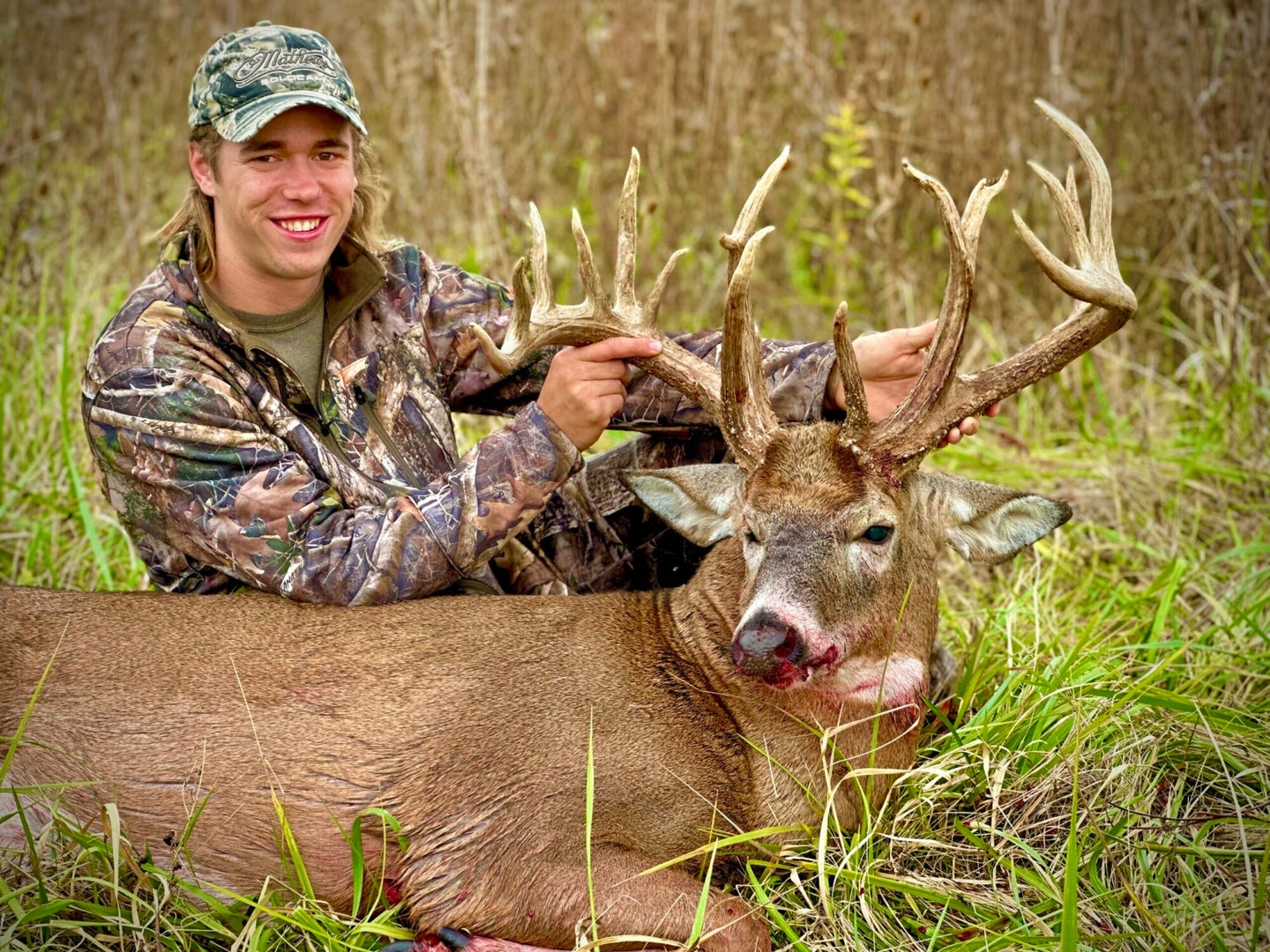 Lair didn't realize until approaching the buck that it's missing its right eye. Preston Lair
SHARE

On Nov. 5, Preston Lair, a 21-year-old construction worker from Miami County, Ohio, arrowed the kind of buck he had previously only dreamt about. He almost missed his chance—not once, but twice.

Lair first saw the 16-point buck hanging out in a field on his parents’ property in June 2022. It was far enough away that he couldn’t get a firm count on the antlers, but he knew the whitetail was absolutely huge.

“We started talking to some neighbors and they’d had him on trail cameras for the past three years,” Lair tells Outdoor Life. “Of course, by neighbors, I mean they live three to five miles away. He was in our area but not necessarily living in our woods. So I hadn’t seen him until this year when he was obviously more comfortable living in our area.”

Lair decided this buck would be his focal point for the 2022 season. He went out on opening day and every weekend after that trying to get a glimpse of the monster buck. Then an unseasonably warm and windy Nov. 5 rolled around. Lair wasn’t super excited to go hunt, but he pulled his gear together and went out anyways. Shortly after the sun rose, he was greeted by a small six-point buck weaving in and out of the woods near his tree stand. Lair was entertained enough by this little deer to pull his phone out and try snagging a video of it to send to his friends.

“It was still pretty early, but I rattled trying to get this little six-point back. I had my phone out and my Snapchat open, because I hear a deer coming back, and thought it was the little six-pointer,” Lair recalls. “So I’m actually looking at the screen on my phone when I see antlers coming through the trees, like right around the corner. And I realized that wasn’t the six point, and I’m like, ‘what am I doing with my phone in my hand?'”

The massive 16-point buck emerged downwind from Lair as he tried to stash his phone and get his compound bow ready. The buck came out near a spot he had marked earlier at 20 yards.

“But by the time I got my bow up and drew back, he had wandered further away and was quartering away. But 20 yards was in my head. By the time I looked through my peep sight and got everything ready to shoot, I didn’t realize he was actually at 30 yards. I was comfortable with my shot for it being a 20-yard shot, but the arrow went underneath him. It was a clean miss.”

The buck flinched a bit but then promptly stood back up and strode back into the woods out of Lair’s shooting lane. Lair, desperate for the buck to return, rattled again with ferocity.

“It was probably the loudest I’d ever rattled in the tree stand. I was nervous and I really wanted him back,” Lair chuckles. “I was like ‘I just blew the buck of my life and I’ll never see him again on our property.’ And I heard him turn around and come back to the second rattle fast enough that I wasn’t ready to shoot again.”

Once again, the buck caught Lair by surprise. He still had the antlers in his hands and his bow in his lap as the buck came back into sight. It was looking for a fight with whatever competition was making all the ruckus.

“So I draw sitting down and stand and turn to face him. I look down my peep sight as he’s about 15 yards away. I realize that all five of my red and green pins look like a Christmas tree. None of them are sitting still because I’m so nervous about shooting this buck the second time,” Lair says. “But when he was about 15 yards away I put a really good shot on him, thankfully. He turned and I saw blood spray everywhere. It turned out to be a double lung shot. He ran about 70 yards and fell over in the grass and he didn’t get up.”

Lair stared at the buck for five minutes in case it stood up and took off. Once the five minutes was up, Lair texted his dad and the two dragged the big-bodied whitetail back to the house. It wasn’t until Lair approached the buck that he realized its right eye was actually missing. In hindsight, Lair’s a bit sheepish about being on his phone when the buck came out the first time. But humility ultimately wins the day.

“You can’t leave those parts out,” Lair says. “You gotta tell people what actually happened.”

The next day, Lair and his dad rough-scored the buck at 201 1/2 inches. Taxidermist Rick Busse will eventually get official measurements on the 16 scoreable points. The buck could break the current Miami County record of 198 1/8 inches held by Ray Hetzler, according to the Buckeye Big Buck Club operated by the Ohio Department of Natural Resources.

All records aside, though, Lair is humbled by the experience overall. He’ll never forget the buck fever that tore through his body before and after taking the shot.

“I sent a video to my hunting buddies trying to show where the buck went down. But my hands were shaking. They were like ‘Preston, what’s the big deal? It’s just another deer. Why are you so nervous?’ But once I actually showed them the deer, they realized why I was shaking so bad.”