After falling 17 feet and fracturing his leg and three vertebrae, Chase Watson says he'll never climb a tree without a lifeline again 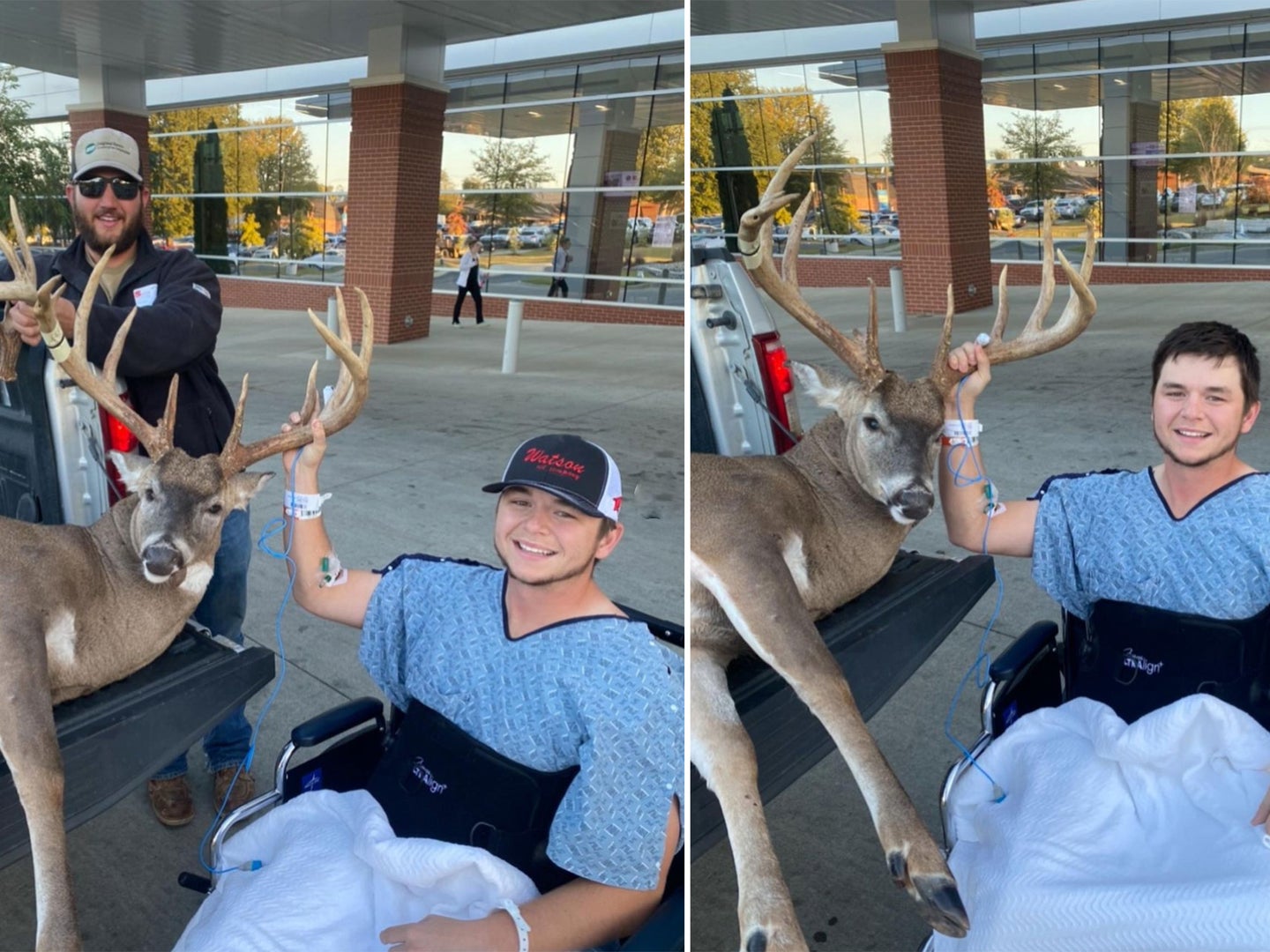 Clay Herren (left) helped recover the buck after Chase Watson fell from his treestand ; Watson finally gets his hands on the buck in the hospital parking lot. via Instagram
SHARE

Chase Watson shot the biggest buck he’s ever killed two weeks ago while hunting from a treestand on his family’s farm in Arkansas. The buck dropped close by, but as Watson climbed down the tree to make a follow-up shot, the strap on one of his climbing sticks broke and he fell roughly 17 feet to the ground. He fractured a bone in his right leg, along with three vertebrae in his back, and instead of retrieving the deer, Watson went straight to the hospital. He wouldn’t be able to put his hands on the 163-inch buck until the following afternoon, when his best friend brought the deer to the hospital parking lot.

Watson is still recovering from his injuries, and he’s been back at home for a little more than a week now. He still has a deep bone bruise in his left heel, along with a fractured fibula in his right leg, but considering that he nearly broke his back in the fall, Watson says he’s lucky to be alive and walking.

“I don’t know how it could have ended any better, to be honest,” Watson tells Outdoor Life.

Watson, who lives in Corning, Arkansas, has been bowhunting on his family’s 450-acre farm since he was around 10 years old. Now 25, he’s taken three whitetails over 140-inches off the property in the last 15 years. But he says the 10-pointer he nicknamed “Scoob” is the biggest buck he’s ever seen on the farm. After watching him grow over the last couple seasons, Watson started hunting him two days after archery season kicked off this year.

“I didn’t have the right wind to hunt him until Monday, the 26th, and I saw him that first day,” Watson says, adding that he was hunting from a ground blind that afternoon. “He was still on a summer pattern, and I had him in one of our food plots, but the closest he got was 75 yards. He kind of got off his main pattern after that. I was able to get a couple pictures of him the first couple weeks of October, but he wasn’t showing up anywhere consistently.”

Watson hunted him three more times over the next couple weeks, moving his saddle from spot to spot, but he only caught glimpses of Scoob on trail cameras. After a decent cold front blew in around the middle of the month, Watson decided to move to a treestand that was set up in the main block of woods on the property.

On Monday morning, Oct. 17, Watson got some pictures of the 10-pointer from his cellular trail cam that was located near the treestand. He had a good wind, so he left work early that day. He hiked into the woods and climbed the same tree he had climbed hundreds of times before. By 3 p.m., he was all situated, with his safety harness roped to the tree.

Around 5 p.m., some does passed by, and then a young 8-pointer walked through, working every scrape he came across. Five minutes after that buck cleared out, Watson caught a glimpse of Scoob through the trees. He could barely make out the buck’s left main beam, but that was all he needed to see.

“From there it was probably a five-minute ordeal, and he worked every scrape that young 8-pointer had worked,” Watson says. “He was about to come into the main scrape at 17 yards, but right behind him came five does. They were a little downwind and they started getting nervous. At this point he’s probably 30 yards, and this one doe starts stomping, so he turns and starts walking toward them.”

With the buck on his far-right side, Watson had to spin all the way around to get in position. When the buck stopped in an opening about 35 yards away, Watson put the pin behind his shoulder and let go. The arrow hit a little high, striking the spine but passing through the top of both lungs.

“I was trying to get another arrow in him, but he kind of flopped over in some brush and I couldn’t get another [shot] from the stand.”

In hindsight, Watson says the buck was probably dead after the first arrow passed through. But in the moment, after making a good shot on the biggest deer he’d ever hunted, he was focused on finishing the job.

“So I went ahead and let the bow down to the ground, climbed over and onto the climbing sticks,” he says. “I unhooked from the rope attaching me to the safety harness, and I made it two steps down. That’s when the strap on the stick broke.”

Watson doesn’t remember the 17-foot fall. But he was so full of adrenaline that when he did hit the ground, he picked himself up, walked over to the downed buck, and put another arrow in him. He says that at first, he thought he was good enough to walk himself out, but after trudging back uphill past the stand, he started feeling the pain and sat down to call his dad.

Read Next: What If Grizzly Bears Killed as Many Hunters as Treestand Accidents Do?

“I never did go down and put my hands on him,” Watson says. “I was trying to get back to the top of the hill and I guess regroup, but I made sure [the buck] was dead and then waited on my dad. Once he showed up, I had him run down and make sure the deer was done. But I still never put my hands on the deer.”

Watson would eventually get a chance to put his hands on the buck, but by that point he would be hospitalized and sitting in a wheelchair.

His mind still on Scoob during the drive to the hospital, Watson says he called his best friend, Clay Herren. It was a warm evening, and he didn’t want any of the meat to go to waste, so he asked Herren to retrieve the buck.

The following afternoon, after recovering the buck and putting him on ice for the night, Herren drove to the hospital with Scoob in the bed of his pickup. Watson was wheeled out for the obligatory grip-and-grin—hopefully the only time he’ll have to pose next to a buck while wearing a hospital gown and a back brace.

Oct. 31 marked the two-week anniversary of Watson’s fall from the stand. He’s still recovering from the fractured right fibula, along with the three compression fractures he suffered to his L1, L2, and L3 vertebrae. He’s no longer wearing a splint on his left leg, and says that, to his surprise, his back isn’t bothering him as much as the bone bruise in his left heel. Watson will continue to wear a turtle shell back brace for the next six to 12 weeks, and his doctors hope the vertebrae will heal naturally without any surgery.

Watson says the one thing he’ll take away from the incident—besides his personal best buck—is the importance of using a lifeline when getting in and out of a treestand.

Along with a harness and the know-how to use it, lifelines are an essential piece of gear that all treestand hunters should utilize. Watson’s fall wasn’t a freak occurrence, and according to Whitetails Unlimited, one out of every three hunters who use an elevated stand will be injured in a fall at some point in their life.

Hunters can also prevent falls by frequently checking their gear and replacing any worn straps on their stand, as well as the straps on their climbing sticks—which, in Watson’s case, was the one thing he didn’t double check before hunting that day.

“I always check [my treestands] and I was in there earlier that day and the Saturday before. I went up the tree and gave it my check like I do every single time. I went all the way to the top, shook it all up and down, looked at the straps and I just thought everything was good,” Watson says. “Even the day I went there to hunt it. I mean, the way up was good, but the way down just wasn’t.”