Tips from The Hunting Public: Hunt Buck Bedding Areas as a Team 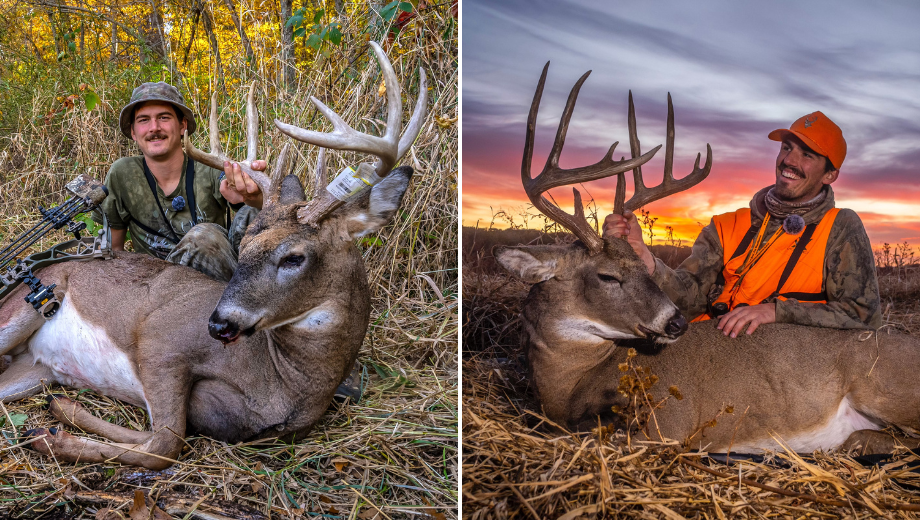 The THP hunted a bedding area as a team and took two stud bucks. The Hunting Public
SHARE

For the 10th stop of The Hunting Public’s Deer Tour, Ted Zangerle and Jake Huebschman hit Iowa public land for the early muzzleloader season. Since Zangerle already harvested his muzzleloader buck, he was looking to fill his archery tag while Huebschman set up nearby with his smokepole. With a cold front in full effect, the big bucks were on their feet during daylight hours.

The crew was headed back into the area where Zangerle had harvested his muzzleloader buck just three days prior, but with the amount of buck sign in the area, they knew there would be plenty more shooters roaming around.

Would you hunt the same area just days after harvesting a big buck there? If your answer is no, it might be time to consider changing your perspective on prime bedding areas. The spot where Zangerle and Huebschman headed into on the morning of October 19th had ideal bedding habitat where the crew had killed a buck just 72 hours prior.

With cell cameras deployed in the area, the crew had watched and waited for a buck to daylight after the commotion, and sure enough, on October 18th, they captured a buck hitting a scrape in daylight. That’s where Zangerle and cameraman Keith Robinson chose to set up the next day.

Huebschman, along with cameramen Hayden Krimmer and Greg Clements, set up nearby, within a few hundred yards of where Zangerle had killed a deer just days before. Huebschman was confident in the decision to go back into the same bedding area, knowing there were plenty of big bucks to go around.

“Through the trail cameras, we knew there were still four or five mature bucks in the area,” says Huebschman.

Huebschman set up that morning to observe a bedding area that bumped right up to a small river system. As first light came and went without much action, Huebschman settled in and began glassing the other side of the river. To his surprise, he got eyes on a bruiser of a buck as it slowly worked through the hardwoods and bedded down. It was within range of his muzzleloader, but it is illegal to shoot across navigable waterways in Iowa.

With Zangerle hunting nearby, Huebschman got in touch with him to get his hands on his packable hip-waders. Since the buck had bedded down within eyesight, Huebschman didn’t want to take his eyes off the buck in case it decided to change beds. Zangerle hadn’t had much action that morning while hunting over the fresh scrape, so he snuck over to Huebschman to pass off the waders.

Unfortunately, the river was too deep for the hip waders, so Huebschman had to back out and find a different point of access. While he and Krimmer set off, Zangerle, Robinson, and Clements all settled in on a small ridge just above the river bottom to keep eyes on Huebschman’s target buck.

Even with all of this commotion, about an hour after Huebschman had left, Zangerle caught movement just to his left along the river bottom. To his surprise, a big buck was headed in their direction. After 20-minutes, the buck walked up the ridge, right toward the crew that was hidden in a thick patch of cover on the ground.

Clear Your Area Before Sitting Down

As the buck approached bow range, Zangerle slowly got into position for a shot. The buck was completely unaware that Zangerle and the two cameramen were settled in just 10 yards away. As Zangerle came to full draw, the buck stopped just before an opening in the undergrowth. Zangerle leaned out to his left, settled his pin, and let the arrow fly.

The buck kicked and wheeled out of the opening heading up and over the next ridge. Zangerle and Robinson quickly moved to the top of that ridge to get eyes on the buck. Through the timber, Zangerle could see that the buck had bedded, but was still alive with its head bobbing. He knew then that his shot must have been a little far back.

“After about an hour, the buck got up and moved off over the next ridge,” says Zangerle. “We decided not to push the buck and to wait until the evening before tracking.

While Zangerle didn’t have his hands on the buck yet, he knew the hit would turn out to be lethal. Zangerle explained that their setup is what allowed him to take the shot.

“Since the buck came in to our left, we had to shuffle around a little, which can be very difficult and risky when hunting from the ground. My dad always taught me to clear out the leaves and brush whenever you’re making a ground set up, it allows you to move quietly without rustling leaves under your knees and boots.”

It’s often the small steps like these that make the difference in a successful hunt.

Patience is Key When Hunting a Bedded Buck

While Zangerle and Robinson were keeping eyes on their hit buck, Huebschman and Krimmer had made their way around the river and were closing in on the bedded buck from the morning. In the time it took for them to make the move, the buck had switched beds and moved to a thicker area. All they could see were his tines sticking out of the canary grass.

“We were set up in range around 10:00 AM, just waiting for the buck to stand up,” said Huebschman. “We decided to be patient and wait him out knowing that he’d stand up at some point. Most deer move beds every three to four hours throughout the day, it might not be a big move, but they typically at least stand up and browse momentarily before bedding back down.”

They only had about 10 feet of elevation over where the buck was now bedded. They were set up on a small dike, around 200 yards from the buck. Over the next seven hours, it stood up four or five times, but never presented a shot to Huebschman. The buck was clearly comfortable in that tall canary grass and didn’t have a reason to leave. Huebschman did not want to force a shot, knowing that he still had plenty of time before sunset.

Around 5:00 PM, the buck finally left that ¼ acre area of tall canary grass and moved about 70 yards from his bedding area. As he moved through the grass, Huebschman could finally see his vitals. The buck was quartered toward him, so Huebschman settled his crosshairs and took the shot.

“Right as I shot, we heard an incredibly distinct bullet impact, but with the smoke from the muzzleloader we couldn’t see where the buck went,” says Huebschman.

When he turned to his left, Clements was on the ridge across the river fist pumping because he had seen the whole scene play out and watched the buck go down. After the shot, the crew met back at the river and made the decision to leave Zangerle’s buck until the morning so they could call a tracking dog. They proceeded to get Huebschman’s buck taken care of and packed out of the woods.

The next morning they used a tracking dog to quickly find Zangerle’s buck. It had expired just on the other side of the ridge from where Zangerle and Robinson had seen it the day before.

This day ranks as one of the top hunting days for the entire crew. Two mature Iowa bucks taken just 500-yards apart. It’s a hunt that dreams are made of. For Huebschman, having the patience and persistence to wait the buck out was key. He knew that the buck had nowhere to go without presenting a shot, so sitting and waiting for it to provide a shot opportunity for seven hours was not just the best move he could make, but the only move that made sense.