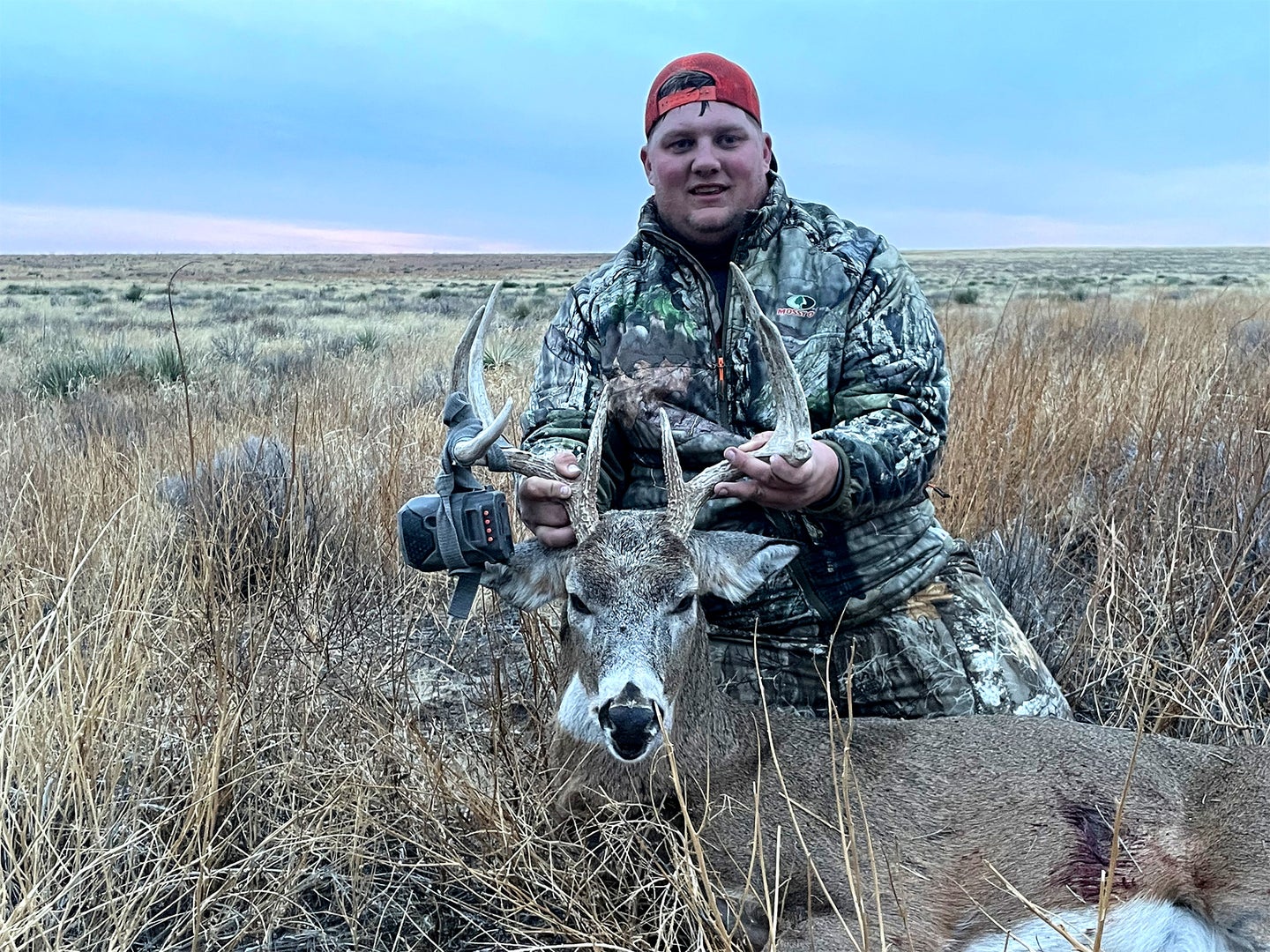 Jake Mitchell ended up tagging an eight-point buck that had walked away with one of his trail cameras a month before. courtesy of Jake Mitchell
SHARE

A deer hunter in Kansas had one of his trail cameras go missing in early November. He ended up finding it last weekend in one of the strangest places imaginable: tangled around the antlers of a whitetail buck. The hunter got his camera back, but only after he shot the eight-point shutterbug.

Jake Mitchell, a 22-year-old farmer and rancher, says the property where he grows crops and runs cattle in southwest Kansas is typical for that part of the country. It’s wide-open and windswept, with nary a tree in sight. And because he doesn’t have any blinds or feeders set up on the property, he says the best (and really the only) place to hang a trail camera is on a fence post.

Spoiler alert: Mitchell explains that since there are no trees for them to work, the local bucks also tend to use these fence posts as scrapes.

“I had four cameras up this season, and they were strung along a mile stretch on the northern edge of one of our fields,” Mitchell tells Outdoor Life. “The deer come out of the sandhills into us because of the farm ground. They like to feed out there on the milo stalks and the wheat, and I try to catch them when they’re coming through to feed.”

Mitchell uses traditional trail cameras, and when he went out to pull SD cards on Nov. 7, he noticed that one of his four cameras had disappeared. He also saw that the fence post it was on was busted, but he just figured somebody must have seen the camera and taken it.

Four weeks passed, and Mitchell had pretty much forgotten about the missing trail camera by the time his cousin came out for a pheasant hunt on Dec. 3. Mitchell had spotted a monster muley buck the night before, and he still had a landowner tag, so they had shotguns and rifles with them in the pickup. They stopped at a vantage point to glass that morning and spotted a decent whitetail buck with an abnormal rack a couple thousand yards away.

“He was just sitting out there in the CRP field on the neighbor’s land. I didn’t really think anything of it because he was so far out that you couldn’t really tell what was on his antlers. I thought maybe it was a deadhead, or another antler that he caught from a fight.”

After pheasant hunting all afternoon, Mitchell and his cousin returned to the same spot around 4:30 p.m. and they saw the same buck again. This time, the deer was much closer, and when Mitchell looked through his spotting scope, he was pretty sure he could see a trail camera dangling from one of its antlers.

“I gave my spotting scope to my cousin and he’s like, ‘By God, that’s the camera!’” Mitchell says. “So it was on from there.”

Determined to get his camera back, Mitchell dropped down into a draw and got within 80 yards of the buck. He didn’t have a great shooting lane—the buck’s body was covered up by milo stalks—but he pulled the trigger anyways and the bullet connected. The shot hit a little farther back than he would have liked, but the deer expired after a 200-yard sprint, and Mitchell walked up to find his trail camera wrapped up around its right main beam.

Read Next: The Best Cellular Trail Cameras of 2022

He says the camera was broken and the SD card was gone, so he didn’t get any photos documenting its strange, circuitous journey. But when he called his neighbor on the phone to explain what happened, the neighbor told him he was well aware of the camera thief and had photo evidence on his own trail cameras.

“The neighbor was giggling about it. He said, ‘We just saw him on camera with a camera, and we were like: Who’s is that and where the hell did he pick it up?’”