Iowa Hunter Tags a 20-Point Buck, Waits to Track It So His Wife Can Be There, Too

For Chuck Grado, the best part about killing the buck of a lifetime was being able to recover it with his wife 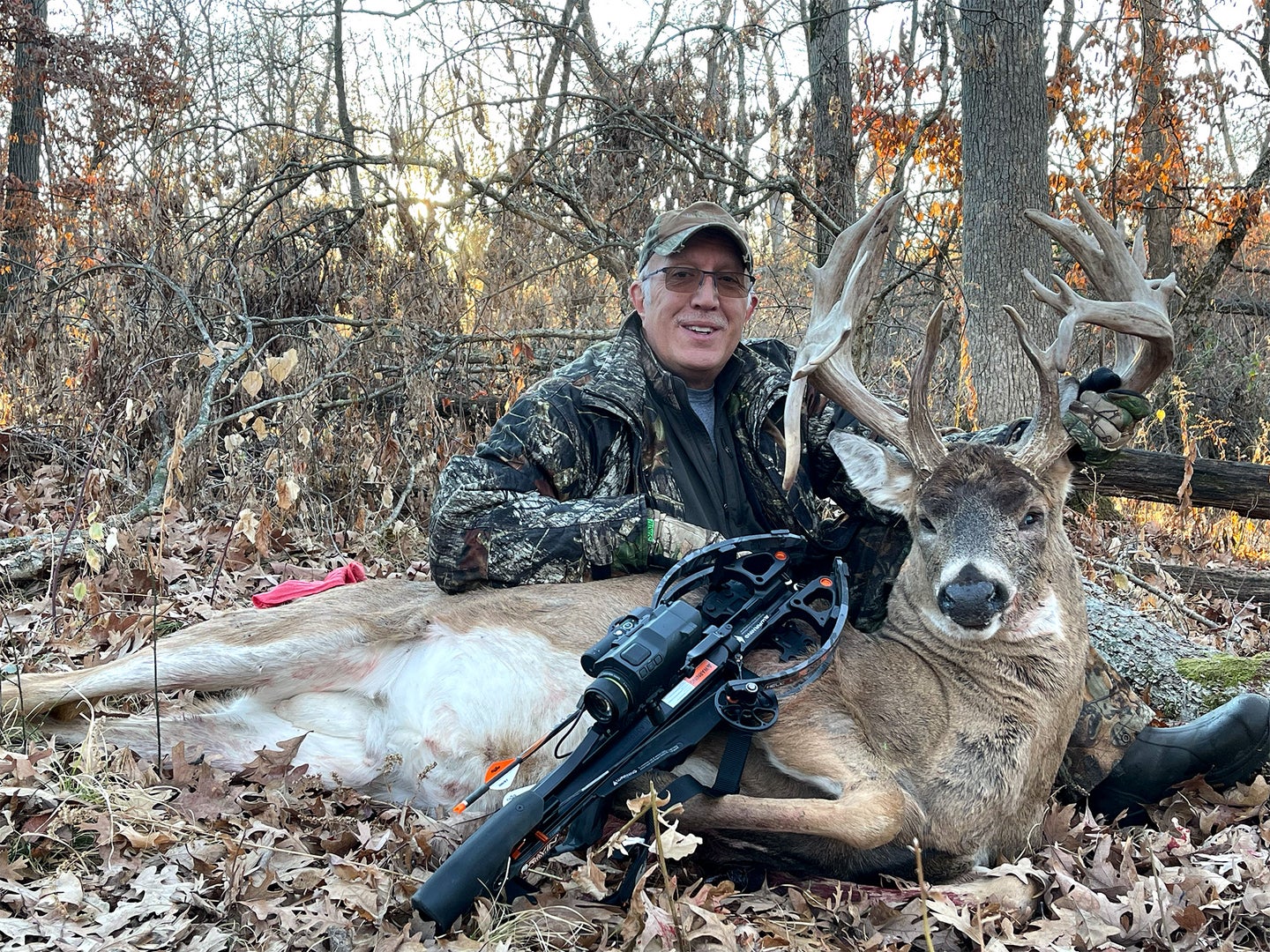 Chuck Grado with the biggest buck of his life. courtesy of Chuck Grado
SHARE

After Chuck Grado made the shot on a nearly 200-inch whitetail last month, his mind went straight to his wife, Ruth Macke. Sitting alone in a treestand in the fading light, he typed out a cryptic, nerve-rattled text: “30+her Byckr Hera. <omE now. 4 Bucks here.”

Ruth, who was back at their home in Cedar Rapids, saw the text and figured he was still shaking in the stand. She wouldn’t see the buck herself until the following morning, but she already knew that whatever her husband had killed was special.

“I think your typos answered my question about shaking,” she replied.

The Hunt for the 20-Point Buck

It was the day after Thanksgiving, and Grado had been in the stand all afternoon by the time the 20-point buck stepped into view. Perched in an oak tree over a well-worn game trail between the river bottom and a wheat field, he’d just passed on a younger 8-point. Grado recognized the big nontypical from trail camera photos, but this was the first time he’d seen the buck in the daylight. As the deer came down the trail, he regretted for a moment that Ruth wasn’t there to witness it. It was easily the biggest whitetail he’d seen in all their years on the farm.

His first shot opportunity came when the buck stopped 30 yards away from his stand. Grado focused on the deer’s body as he tried to get used to looking through the scope on his crossbow. He had always hunted with a compound, but after injuring his rotator cuff, this was his first season hunting with a crossbow. Grado knew the Ravin crossbow would give him more range, but he had never shot a deer from more than 20 yards away, so he waited patiently for the buck to work closer.

When the deer walked past him broadside at 10 yards, he panicked for a moment as he looked through the scope and saw nothing but fur. The buck was still walking slowly down the trail, so he bleated loudly enough to get its attention.

“He stopped, and time went into slow motion,” Grado says. “I moved the aim point to the front of the deer and then aimed back onto his chest, and somewhere along there I took the shot. Time immediately regained its speed, and I felt my heart racing and my breathing quicken.”

After the shot, Grado watched the buck through his binoculars as it crashed through the woods and then stopped on the other side of a ravine. It was now 15 minutes before sundown, but it felt even darker under the hardwood canopy. Grado lost sight of the buck, and he worried for a moment that he’d whiffed the shot. After waiting a brief spell, he climbed down, walked over, and found the crossbow bolt stuck in the ground. It had made a clean pass-through and was flecked with dark blood.

Grado looked down and thought about the other hunter he’d brought out that evening—a local sheriff’s deputy who was sitting in a treestand on the other side of the property. The deputy was new to bowhunting, and Grado had invited him out to their farm to hopefully put him on his first doe. He wasn’t planning on shooting the biggest buck of his life, though, and he wondered if he should even tell the deputy about it.

“I was still trying to process everything, and I still wasn’t certain that I had killed the animal,” Grado says, explaining that he didn’t want to set a bad example and risk bumping a wounded buck in the dark. “And I didn’t want to deal with his emotions. I wanted to recover it and be with my wife when I did. I just wanted to share it with her.”

His mind made up, Chuck stepped on the bolt, pushing it further into the ground and out of sight. Then he drove over to pick up the deputy and kept his secret to himself. He’d be able to share it with Ruth soon enough.

The pride that Chuck felt as he and Ruth laid hands on the buck the next morning was powerful.

“We’ve always had a desire to grow bigger and better deer,” Chuck explains, and the deer lying at their feet was a testament to everything they’d accomplished since 2007, when they first purchased the wooded tract bordering the Cedar River.

In the 15 years since, they’ve turned the 350-acre property into a working tree farm and a haven for deer. The property has seen its share of poachers, floods, and windstorms, but Chuck and Ruth have been able to hunt together through it all, chasing whitetails and gobblers through the seasons.

“I was so thrilled at that point,” Chuck says. “Ruth and I hugged and laughed. This animal was the deer of a lifetime, and it was so cool to share it with my life partner and hunting buddy.”

After recovering the buck, Chuck was eager to show it off to some of his other buddies. A few of them came out to the farm later that day and put a tape to its rack. They came up with a rough score of 198 inches and some change. Chuck also estimated the buck’s age around 8 1/2, but he’ll have to wait for his taxidermist to pull its teeth before he can say for sure.

“Three of my friends who I’ve known for a long time came over, and they were all excited and happy for me,” Chuck says. “Just the joy of other hunters coming over and seeing the buck was great. We have such a nice community of hunters, and it’s just a wonderful sport.”