Crappies in the Void 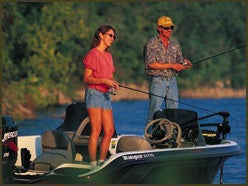 Most crappie anglers have two-dimensional vision when they look at a lake. They see only the flat surface of the water and visible cover such as fallen trees, stumps and weed lines. They don’t consider the third dimension: roving baitfish schools, drop-offs, ledges and other underwater oases of structure that are located out in open water. In neglecting the unseen, most crappie fishermen miss some of the best fishing and biggest slabs.

There are four rules for fishing open-water crappies: 1) find the baitfish schools to find the general area where crappies are prowling; 2) locate ledges and drop-offs, especially those with cover; 3) match the line and lure colors to the circumstances; and 4) complement a lure’s size and movements with the water temperature.

** Baitfish Schools**
Crappies often swim far and wide in search of baitfish schools. When these roving bands of crappies locate a school (those inverted Vs on your depth finder), they’ll suspend beneath it and feed at their leisure. To catch suspended fish, mark your fishing line in one-foot intervals and count the marks until the bait reaches the desired depth. Always dangle the bait slightly above where crappies are holding, because the fish look up to spot minnows silhouetted against the surface. They might rise three or four feet to hit a jig, but they might not even see a jig that’s bouncing below them.

T.H. “Ray” Racine of Pineville, La., uses electronics to probe channels on Louisiana’s Saline Lake for crappies. Racine first engages his trolling motor to zigzag along drop-off edges slowly. As he moves, Racine studies the screen of his depth finder for subtle clues that might indicate crappie schools, bait or fish-attracting cover.

When Racine sees something he likes, he rigs two limber graphite jigging rods and ties three small jigs of different colors (about 18 to 24 inches apart) on each. He uses 1/32-ounce jigs in winter and early spring and 1/16-ounce baits after the water warms up and the metabolism of crappies requires them to take bigger bites of food. With a pole in each hand (one held higher than the other) the Cajun fisherman jigs the baits up and down next to the drop-off. Racine is able to fish six different baits at six different depths until he figures out which lure color the fish want and at what depth.

When fishing sloping shorelines and ledges, the Cajun casts a slip-cork rig with a single jig attached. The rig allows the line to slip through the float while letting the jig sink to the bottom. The cork helps maintain the line in a vertical position while the jig is hanging in a horizontal plane. Racine works this jigging rig down slopes toward a drop-off.

“The jig must hang horizontally,” Racine cautions. “A minnow swims horizontally, not vertically. If the jig hangs down, crappies will likely ignore it. To make the lure hang horizontally, push the knot up under the eye of the hook [BRACKET “in one direction or the other, depending on the jig’s balance”].”

Color Combinations
Once Racine tests a jig under the water’s surface and is satisfied it will maintain its horizontal position, he lowers the rig to the bottom and begins to fish. “Crappies like a smooth-running bait,” he says. “So I run the jig slowly across a drop-off. I let it drop every now and then, just a little. Fish will often get so close to the bait that they’ll rub the line to investigate the jig. In fact, sometimes when the bigger crappies bite, you won’t feel anything other than a slight change in the weight. You have to be alert and ready to set the hook.”

Line and lure color can make a huge difference in open water, especially in calm water or when fish aren’t feeding aggressively. The wrong color of line, for example, might spook finicky crappies or at least make them stay away.

Racine explains, “In dingy water, I could rig up two identical rrigs, one with yellow line and another with clear line, and without fail I’ll catch three fish to one on the yellow-line rig. On a clear lake, however, fish won’t even touch a lure on a yellow line, but they’ll eat that jig on the clear line with no complaints. It’s simple: If you’re fishing a lake with a green tint, use green line. If you’re in a clear lake, you’re better off using clear line.”

Racine likes to fish a variety of jig combinations with his multiple rigs until he hits upon the right color combinations. Most of the jigs he fishes display more than one color, because he says few things in nature are only one color. He’ll also try to match the jig’s coloration to the forage available to crappies in the lake he’s fishing. For example, he says that, “Red with a pearl body can be used to represent a shad, while green and orange is great when fish are biting on crayfish.

Another good trick is to add glitter to a jig so that it reflects sunlight like a fish’s scales. Whatever you use, just keep in mind that you’re trying to realistically portray the crappies natural prey, and you’ll boat some slabs.”

The Temperature Variable
Frank Reed of Many, La., fishes Toledo Bend and has learned to let the weather and water conditions dictate how he work baits. When the weather is warm, he bounces tiny tube jigs just above brush piles to stimulate aggressively feeding fish. He may lose some of his jigs to the brush piles, but crappies love structure, and Reed knows he has to put a jig where fish want it.

When the weather is chilly, Reed takes a different approach because crappies are likely to be sluggish. On cold days, it’s critical to put the bait as close as possible to the fish. They might nibble something staring them in the face, but ignore something that’s more than a few inches away.

“In winter, work jigs much slower and use smaller jigs,” Reed advises. “Don’t move your jig any more than what the rocking of the boat will move it. Keep the jig drifting along with the boat and just move it slowly from side to side. When the temperature drops below freezing, I use a one-sixty-fourth-ounce feather jig on two-pound-test line. It falls very slowly.”

When crappies are feeding aggressively, he switches to 4-pound-test line with 1/16- or 1/32-ounce tube jigs.

Depending on water clarity, Reed also switches the color of his jigs. “For discolored water, I pick darker jigs such as black and chartreuse or blue and chartreuse because they stand out better. For clearer water I’ll use brighter colors,” he says.