Utilize these pro-level tactics to land a monster catch on your next trip. 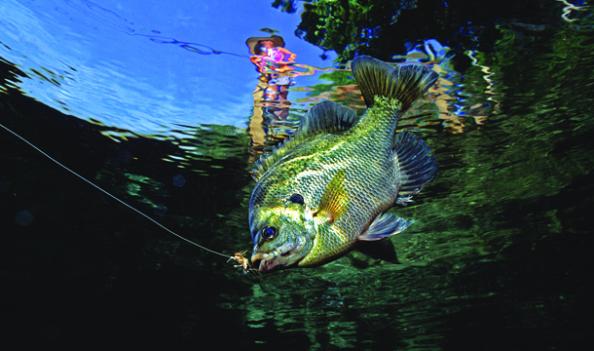 Before Mark Davis became a professional bass angler, he was a successful fishing guide in Arkansas. And long before that, he was a diehard fan of fishing for bluegills. After a career that includes winning the 1995 Bassmaster Classic and three BASS Angler of the Year titles, the 51-year-old still loves bluegills and sharing his bluegill fishing tips. To the point that, in spring, when he’s on the tournament trail, he’s thinking about catching them in summer, when it’s hot and sultry and they’re in deep water.

“It’s an underutilized fish and a lot of fun to catch, not to mention that they’re pretty good to eat as well,” Davis says. “I used to tell people we were going bluegill fishing and they would say, ‘What? Bluegills?’ Then we’d start catching them and they’d have a ball. For me, it is the most addictive form of freshwater fishing there is. I love bass fishing, but once I start catching those big bluegills, I want to go every day.”

Davis shifts his tactics for bluegills during summer, when, typically, they’re found deeper than in the first major spawning period of early spring. Bluegills spawn on or near the full moon from April to August in the Southeast. They’re easier to locate in April and May, when their fanned, saucer-size beds dot shallow areas. Later, however, as the temperature rises, they move deeper.

That’s where Davis works his magic with his drop-shot rig and electronic sonar unit. He primarily fishes near his home on Lake Ouachita, a deep, clear reservoir, and he says his deep tactics work on other highland lakes as well.

“I use my sonar just like I do when I’m bass fishing. Bluegills show up like little round balls rather than hooks. When you take a hard look at your screen and realize what you’re looking at, they’re pretty easy to find.” Ouachita has deep hydrilla and milfoil, and Davis begins there. If the lake level is high, he says, he’ll start trolling on the inside edge of the grass on a long point while watching his sonar screen. When he marks the bluegill balls, he’ll toss out a floating buoy and drop the live cricket. His simple rig consists of a ¼-ounce drop-shot sinker with a cricket hook about 12 feet above the weight. Crappie stake beds, brush piles, rocks, or stumps on long points, or standing timber in open water, are a bonus, Davis says. Bass anglers who plant brush piles unwittingly feed his addiction to summer bluegills. Bass and bluegills are in the sunfish family, so the two species inhabit similar territories.

“It’s as simple as it gets,” he says. “Even in shallow water, I’ll mark them with a buoy and back off, then cast and drag that rig through the beds. That same rig works in 4 to 12 feet of water. Drag it slowly. You won’t hang up and the cricket stays clean.”