Match the hatch- of the latest lures, that is. 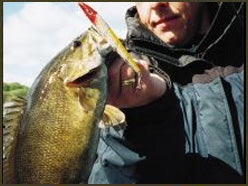 When the weather starts to turn chilly and I’m after bass, I like to fish big baits up against windblown points and shores that have fast drops to deeper water. Where shad provide the main eats for bass, a few days during which the temperature hovers around 40 degrees knock such baitfish into thermal shock. They start sinking toward the bottom, twitching as they sink. Full-size hard or soft suspending jerkbaits do well on such occasions. It may come as a surprise, but big-profile flies also work well, even in really chilly water.

Striper guide Dan Marini figured that out a while ago. One spring day Dan took his fly rod to fish with a pal who competes in local bass tournaments and uses conventional tackle. “I caught fish on the usual small flies,” says Marini, “but not as many as he did on a jig-and-pig and spinnerbait. I realized that to do as well, I would have to copy whatever it was in the size, looks and action of those lures that attracted fish.”

Finding a sinking-head line to deep-six a fly was no problem, but Dan at first thought there was no way to imitate precisely the action of a conventional bass lure. Or was there?

Material Gains
Bob Clouser’s introduction of the Deep Minnow streamer some years back opened the door for a rich variety of fly-weighting systems whose composition includes beads and cone-shaped heads. Not only do such weights aid in sinking a fly to the strike zone, but they enhance fly action as well, depending on the retrieve. Additionally, various epoxies and sealants are used now to finish fly heads and provide tuned slow-sink capabilities. The more heavily weighted the head, or the more forward the weighted dumbbell fly eyes are positioned on the hook shank, the more up-and-down jigging action you can coax from a streamer between strips. Sometimes that’s better; sometimes it’s not.

Just think of the various soft and hard jerkbaits. Some have short bills while others have longer bills. Some suspend while others sink slowly between rod twitches. Now think of a streamer flyÃƒÂ£the original suspending bait and it’s obvious that flyfishers must be successful in virtually any situation where jerkbaits produce. All that remains is the profile component.

Bob Clouser’s original dumbbell-eyed Deep Minnow bears little resemblance to the variations sold commercially now. Many of the newer versions have heavier eyes that are placed near the hook-eye. And the flies are shorter than the originals. They tend to produce that quick up-and-down action of a jig with trailer or head-weighted plastic worm. Again, that works occasionally, but we’re considering the imitation of larger forage fish or jerkbaits. Clouser’s originals, designed to catch smallmouth bass, were up to five inches long!

A master fly tier himself, Dan Marini took an approach similar to Clouser’s when he attempted to concoct a streamer for bass in his neck of the woods. Marini knew that some bulk-producing natural materials were more opaque than other hairs and also that some synthetics whether by accident or design were more translucent than others. The former he tied with extra flash material, after experimentation demonstrated that the opaque, yet glittery, style excelled when greater silhouette was required. He found that a somewhat less dense look with more translucence was preferable in clear water under bright conditions.

Most flyfishers hunt bass either with surface poppers or streamers and creepy-crawly leech things that measure about 3 to 31/2 inches long. If you’re trying to imitate the profile of a big jerkbait, however, that’s not nearly long enough. Here’s a good gauge: with your hand open and fingers extended, check the distance between the tip of your middle finger and at least the middle of your palm. That’s about the right size for a fall or early spring flash streamer for bass. Shad, perch, smelt and alewives are great ccolor/pattern archetypes. Captain Dave Beattie of Epping, N.H., makes a deadly factotum of a streamer a multitasking pattern with grizzly feather flanks that freshwater bass just can’t let go by.

Other Options
What about those times when the big suspending- or sinking-minnow look imparted by your streamers falls short, maybe because the bass decide they’d rather have a plastic worm on the bottom? The Woolly Bugger and various leech patterns will catch bass in such circumstances, but their profile falls a bit short of a standard worm. Let’s borrow from salt water again. Several years ago, well-known fly-angler Lou Tabory concocted a simple, deadly pattern for stripers that eat eels whenever they can get them. Lou’s Snake Fly undulates beautifully and can be worked slowly near the bottom like some kind of leech/eel critter. A flyfisher can’t replicate the exact hop of a weighted plastic worm or jig-and-eel, but this fly comes close.

There are a variety of shorter silicone- or epoxy-headed saltwater flies available that’ll do just fine when the fish want something a bit smaller to chew. If you’re a fly tier, try one of my Tubelet flies built with a conehead weight inside a length of tubing (like Corsair) with rubber tentacles that imitate those of a plastic tube lure.

Like any bass angler who knows his stuff, Dan Marini prefers sharp drops close to various structure when fishing in open, cold water. In many reservoirs, old river channels provide such drops. But just how cold can the water be and still give up largemouths to a giant streamer? The coldest water in which I’ve found streamer-eating bass was around 38 degrees. Friends catch fish when it’s even a couple of degrees colder. What about smallies?

“Smallmouths they’re an enigma,” says Dan. “In fall, the bigmouths are about where you’d find them in spring. But smallies may or may not use the same areas; you’ve got to get on them right away before they move again at least when you’re flyfishing. They’re harder to pattern, but I’ll figure it out.” No doubt he will.