Can't find those bass that were along the shore a month ago? Turn around- they went out yonder in all that open water. Here are some clues to help you find them again. 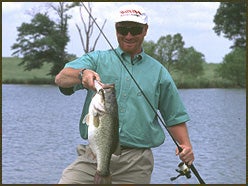 Bass and bank-fishing go together like oysters and Cajun pepper sauce. The shores are where we expect the bass to be-in the shallows biologists call the “littoral zone,” where cover and food come easy. But in most public lakes these days, particularly on the hottest days of summer (and the coldest days of winter), the majority of the biggest fish are lolling in offshore hideaways that lures rarely invade. They’re not easy to find, but if you persist, odds are the bass you locate won’t be hook-shy.

“We’ve done sonic tagging studies in several of our lakes and generally found that most adult bass stay along the shores only during the spawn,” says Texas Parks & Wildlife biologist Ken Kurzawski. “So at least eighty percent of the time, they’re either at intermediate depths or deeper.”

Kurzawski notes that threadfin and gizzard shad are the major prey species in most bass lakes, and these baitfish are rarely found along the shoreline. “Wherever there are large schools of shad, we find that the majority of fish are going to be close to them, usually on the nearest structure,” he says. “The only place where this isn’t true is where shad are scarce, and in those lakes the bass feed mostly on sunfish along the shoreline.”

Mark the Spots
Joe Balog, winner of last year’s FLW Wal-Mart Everstart Series championship, claims that offshore fishing has produced his best catches. “Lake Erie is my home lake, and some of my best summer spots there are three miles from shore,” says Balog, of Cleveland, Ohio. “I can’t even see landmarks, so I have to depend on GPS and a depth finder to get on a spot.”

Experience has taught him that such fishing holes are typically rocky reefs, drop-offs or any other sort of structure that might hold baitfish or crayfish and consequently attract bass.

Balog knows that other lakes also have big populations of offshore fish; his championship at Pickwick Lake in southwestern Tennessee was earned on several offshore ledges in a flooded creek where diving crankbaits connected with the winning catch.

“The weekend fishermen pretty well clean out the shoreline bass in a public lake, so the quality fish are most often on isolated cover well away from shore,” suggests Balog. He often seeks out rises or structure on points in large creeks as well as on the main part of impounded lakes for his best catches.

Oklahoma angler Brent Chapman, one of the top pros in the Bass Angler Sportsman Society (B.A.S.S.) tournament circuit, is also fond of offshore spots. “Fish you find in open water are likely to be in large schools because they’re not limited by the amount of shoreline cover and they’re probably schooled up near a large food supply-pods of shad or whatever,” says Chapman. “The water temperature out there in deeper water doesn’t change much day to day or even week to week like it does along the shore. So when you find an offshore spot, it’s going to turn out a lot of fish all through a given season, and they’ll probably be back there next year at the same time.”

Plumb the Depths
When fishing offshore structure, Chapman depends mainly on diving crankbaits, often fished on lines as light as 8-pound-test. “These lures go deeper and work better on light line, even though you’re more at risk of losing them to snags,” says Chapman. “Bump the lures into as much cover as you can because bass seem to be triggered into hitting sometimes when a crankbait goes darting away from a log or stump. It’s also best to use fiberglass rods for crankbaiting so you or the bass don’t pull the hooks out, as is more likely to happen when a stiffer rod is used.”

Chapman divulges one secret not widely known to bassers for big fish that stage offshore: jumbo spinnerbaits. Although most people think of spinnerbaits as strictly shoreline lures, the bigger models that weigh an ounce or more and are equipped with large wwillow-leaf spinner blades are ideal for working near the bottom. And the bottom offshore isn’t always a long way from the top of the water.

“In a lake like Rayburn, at certain water levels there are wide, shallow flats with the only deep water in a flooded creek channel that winds down the middle,” says Chapman. “Bass use channels as highways in and out of spawning areas, so they’re good before and after the spawn.”

Elsewhere, in deep impoundments where bass stake out submerged points and humps along river and creek channels and waylay passing baitfish, heavy bucktail or feather jigs as well as spoons such as the Eppinger Dardevle Imp often coax reaction strikes. Let the jig or spoon sink to the bottom, then turn the reel handle quickly four or five turns to make the lure dart from the bottom. It’s then stopped and allowed to settle before the procedure is repeated. The Mann’s Little George, a heavy tailspinner, is another deepwater favorite. It can be jigged near the bottom or retrieved in a series of jerks and drops.

Hit the Weeds
Remo Beaver, a longtime guide on Florida’s Lake Istokpoga, has made a career out of finding offshore lunkers for his clients, mostly by live-baiting with wild shiners cast into holes in beds of hydrilla. “In a lake with a lot of hydrilla offshore, you have endless edges where the bass can hide and it’s full of food for them,” says Beaver. “The big problem is finding those holes that are where other fishermen won’t look. That may be a little deep spot way back in a bay that’s too shallow to fish otherwise, or it may be a hole out in the middle of fifty acres of weeds that come all the way to the surface.”

For best success, Beaver advises scouting a lake thoroughly before you even break out the rods. If you set up on the first likely hole you find, fish there and then go to the next spot you see, you may spend your whole fishing time on “community holes.” These are spots that are likely to be overfished because they’re easy to find.

Locating fish offshore is a challenge, but gear up right and you’ll soon put the pattern together-odds are you’ll catch more, and bigger, bass than you ever did by beating the banks.

All That Water…Where Do I Begin?