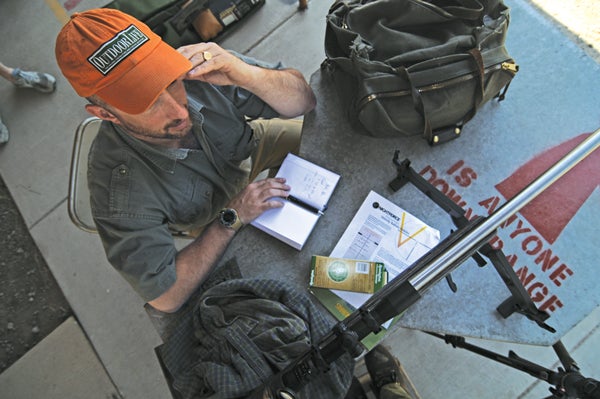 To see the reviews of the Scopes used in this test, CLICK HERE.

Whenever I see yet another new scope with a reticle designed for hunting at long range, I think of my friend Steve, who went after caribou a couple of years ago with a rifle topped with one of these long-range wonders.

When the moment came to shoot, he picked the appropriate hash mark in his reticle and proceeded to sail four bullets over the back of an astonished (and not too bright) bull as his hunting partner helpfully yelled shooting tips in his ear. Not knowing what else to do, Steve centered the crosshairs on the bull’s shoulder for the fifth shot, pulled the trigger and dropped it on its nose.

There are several lessons to be learned from Steve’s experience, the main one being that in actual hunting situations, simpler is better. But we haven’t lived in a simple age since Al Gore invented the Internet, and pretty much every scope manufacturer on the planet has rolled out at least one product for the long-range hunting market.

The appeal of these scopes is easy to see (forgive the pun). They promise to make us better marksmen by giving us the ability to place our bullets on target with more precision at distances where bullet drop becomes a serious concern. But do they work?

The short answer is yes, though it is a qualified yes (more on that later). To determine the actual utility of the more popular models, OL Hunting Editor Andrew McKean and I spent a week in Missoula, Montana, at the Deep Creek shooting range, a marvelous public facility with shooting out to 1,000 yards, putting the scopes through a rigorous testing regimen.

We evaluated each of the 10 models here on several criteria. We looked at how easy the scopes were to use and the quality of the instructions that come with them. (Complete sentences in the Queen’s English earned extra points.) We measured the accuracy of the scopes on well-defined targets at known ranges out to 600 yards. Careful note-taking as we walked out the yardage revealed the quirks of the individual reticles and gave us the proper reference points for accurate long-range shots. More important, we judged their accuracy and speed during a series of timed drills on targets at unknown ranges, also out to 600 yards.

For this exercise, a spotter called out a firing sequence of five shots to the shooter, who had to identify the target, range it with a laser rangefinder and use the scope’s reticle to score a hit as quickly as possible. During this, we used animal silhouettes and numerous small, asymmetrical targets, some just a few inches across, all of which were in dull, earth-toned colors. We positioned them at various angles and in different types of cover and lighting conditions, and they proved an excellent gauge of the ability of the scopes to resolve challenging targets. That you had your spotter yelling like a Marine Corps drill instructor in your ear made it feel like a high-stakes hunting situation.

During the low-light test, we measured the scopes’ performance on a particularly tough target set at 500 yards in the fading light.

We also rated them on how versatile they were for a variety of cartridges and whether they represented a good value for the money.

Why 600 yards?
As a side note, you might ask why we settled on 600 yards as the outer limit for the test. It isn’t that we’re advocating hunting out to that range–far from it. Any shooter’s maximum range depends on too many factors to easily answer this question. There is the shooter’s skill; the accuracy of the rifle; the quality of the ammunition; the size and behavior of the game being hunted; and the environmental conditions during the shot–to name a few. Tally these together and it would be rare indeed to see an ethical 600-yard shot. No, we chose 600 yards because that was the comfortable maximum for most of the reticles in the test, though it did push a couple of them to the edge of their limits.

The Rifles
Without accurate rifles we wouldn’t have been able to fairly gauge the performance of the scopes. That’s why we opted for the Savage M12 F/TR, which is chambered in .308 Win. and comes ready from the factory for F-Class competition, with its heavy barrel, stiff single-shot action and 6-ounce target trigger. A rail in the stock’s forend can accept a bi-pod; we used the excellent one produced by Sinclair specifically for F-Class shooting. Quick-detach rings from Warne completed our set-up and gave us flexibility when it came to mixing and matching scopes and rifles.

The selection of the .308 was by design. Not only is there a variety of high-quality match ammo available–we used loads from Winchester, Remington, Federal and Hornady–but the .308 has an appealing trajectory that put these bullet-drop-compensating scopes to work. Sighted dead-on at 100 yards, a 168-gr. BTHP strikes about 61 inches low at 500 yards, which gave us plenty of drop to play with.

Andrew and I went into the test toting a fair bit of skepticism along with us to the range. Would these scopes live up to the claims put forth by their honey-tongued marketers? We came away pleasantly surprised. All the reticles received passing grades, and some did much better than that. Most of the scopes tested (8 of the 10) had true bullet-compensating reticles, meaning the shooter sees a series of aiming points that correspond to the arc of the bullet’s drop as it travels downrange. Given the variety of cartridges out there–and their different trajectories–these reticles are, by definition, approximations of the bullet’s flight path. But thanks to the elegant consistency of Newtonian physics, these approximations fall into the realm of highly educated guesses. By fiddling with the rifle’s zero and the scope’s power setting, we can tune the reticles so that the aiming marks will line up better with the ballistic curve of our particular cartridge. (See “How the Scopes Work,” opposite. )

Some of the targets used in the test provided high contrast and were easy to see; others were small and earth-toned and nearly invisible.

Shooter Beware
This brings us to some of the limitations of these scopes. Because the scopes need to be on a specific power setting–usually at or near the max of the scope’s range–you run the risk of it getting bumped to a different magnification and throwing your aiming points off the mark. You also lose the benefits of shooting at a lower power, the most significant of which is the wider field of view, which gets you on target faster. This requirement also converts your scope into a fixed-power optic if you intend to use the compensating reticle.

The other two scopes in the field had regular duplex crosshairs and achieved their bullet drop compensation by having the shooter dial the elevation turret on the scope. Markings on the elevation turret corresponded to specific yardages, so once the target is ranged we would adjust the elevation and fire. These scopes allow you to set the power to any level you like, which is a real advantage, but are somewhat slower to use than reticles with multiple aiming points. To get the correct calculations for these scopes, it is critical to know the actual muzzle velocity of the load you intend to use from your rifle, as well as other data such as the ballistic coefficient of your bullet, the scope’s height above the bore and so on.

One point our weeklong test reaffirmed was the need for plenty of range time and meticulous note-taking before we’d feel comfortable using any of these scopes for long-range hunting. Each reticle had its quirks, and only by shooting them in a controlled environment did we get to know their ins and outs. But once mastered, and when paired with an accurate rifle with good ammunition, these scopes are deadly, effective instruments for hunting game at long range.

How the Scopes Work
When you alter the power of a scope with a bullet-drop-compensating reticle, the perceived space between the marks–the fancy term for this is “subtension”–increases or decreases as you go to lower or higher magnification settings, respectively. You can see this yourself by looking through any variable-power scope and fiddling with its magnification. Cranked up to 12X, the distance from the crosshairs to the post might just bracket a deer’s body, but when you back off to 3X, you can suddenly fit the entire tree he’s standing under between those same points. By changing the subtension between the aiming points, you can accommodate the trajectories of different cartridges.

(We’re talking specifically about scopes with the reticle in the second focal plane. In a first-plane reticle, which is more common in Europe, the crosshairs get thicker as the magnification setting is increased and the subtension of the reticle stays the same regardless of which power you put it on.)

Changing the rifle’s zero is another way to get a drop-compensating reticle dialed in. Some copes, like Leupold’s Boone and Crockett models, have you alter the rifle’s initial zero depending on how flat-shooting your cartridge is. Faster, flatter magnum cartridges might require you to set the center crosshairs with a 100-yard zero, while the milder cartridges, such as the .308 Win. we used, start with a 200-yard zero. This initial zero will determine the yardage values of other aiming points in the reticle. The 300-yard mark for the milder .308 would be the 200-yard mark for a 7mm Weatherby.

The Range
Deep Creek Range in Missoula, Montana, not only draws shooters from around the Northwest for its competitions, but is so accommodating that shooters drive hours just to practice here. The facility, managed by Dan Kurzendaum (above), boasts more than a dozen covered benches at its 1,000-yard range, small-bore and high-power silhouette fields and venues for blackpowder cartridges, cowboy action shooting and a whole host of narrower niches. [ hellgatecsa.org ]

To see the reviews of the Scopes used in this test, CLICK HERE.