Black Hills Are Back!

As a native of South Dakota I’m always interested in stories about my home state and this photo piqued my... 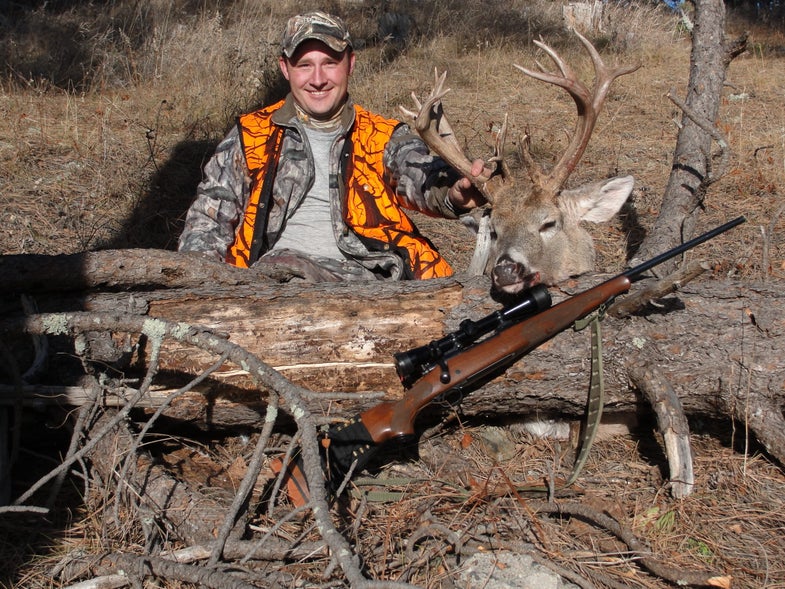 As a native of South Dakota I’m always interested in stories about my home state and this photo piqued my interest. This heavy duty, replacement bumper-style buck was shot in the Black Hills, the very mountain chain where I first was able to legally tote a rifle for whitetails.

Tim Goodwin Jr. is the lucky hunter and he tagged this brute near the Old West town of Deadwood, yes the same Deadwood as depicted in the popular HBO series. Goodwin shot the buck on Nov. 25, which is the heart of the rut for this mountain terrain. According to Goodwin, the buck has 10 scoreable points per side and sports more than 46 inches of non-typical points for scoring. With an overall green gross of more than 180 points, this buck would make anyone smile; even the late Wild Bill Hickock, before his tragic card game. In addition, I’d like to thank Goodwin for serving in the Army National Guard, including a tour in Iraq for our country.

The Black Hills has an interesting deer hunting history. Early reports from the area indicated an abundance of whitetails, but after the discovery of gold by the Custer Expedition in 1874, hungry prospectors and settlers ate the majority of the tasty critters. On a side note, one of the largest non-typicals shot in the state came from the Black Hills in 1870 and scored an amazing 250 6/8 points.

Eventually, modern game laws helped the populations revitalize and by the 1940s the area was once again a hunting Mecca and even featured in “Life” magazine as a great deer hunting destination. In the heydays of the 1940s through the 1960s deer camps thrived in the region. Monster bucks were also shot during this period. In 1957 a Lawrence County buck was shot that netted nearly 176 typical points. Interestingly, a 207 4/8 non-typical buck was taken that same year in the same county. I remember nosing around some of these abandoned deer camps in my youth and I still have a set of chalky shed antlers sporting incredible mass that I saved from a pile of rubble about to be burned.

Eventually, liberal seasons and a maturing forest with little browse took its toll on the popular deer population. Poaching was also a big problem in the area, especially for the struggling elk herd. Sometime in the 1990s the state eventually began limiting the number of hunters in the region and that combined with large forest fires helped the recovery of quality deer hunting in the area. Today, the area holds promise like Goodwin discovered.

Every summer my family takes several trips to the region for horseback vacations and I’m constantly surprised by the big bucks I see hiding in the burns. Check it out next season. You might not only find a bruiser in the burns, but you could vacation in the Old West town of Deadwood (www.deadwood.org) as well.