Whitetail Hunting Tips: How to Hunt a Barnyard Buck

Photo By: Lance Krueger One of the oldest adages of whitetail deer hunting is, “Don’t hunt where the deer are—hunt... 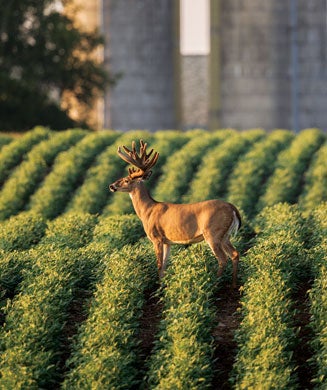 One of the oldest adages of whitetail deer hunting is, “Don’t hunt where the deer are—hunt where they’re going to be.” In farm country, woodlots dot open expanses of agricultural fields, making it easy for hunters to bump deer out of these small tracts of timber.

So bucks that live to see four years of age or more have a few other hiding spots, and chances are there’s a barnyard among them.

Why Hunt Barnyards
Barnyards are perfect sanctuaries for wary old bucks because they allow the deer to pattern their surroundings. They learn the farm and its rhythms. A truck pulling into the drive, children playing in the yard, and tractors rolling down the lane become the norm. They know it’s safe to hold tight in tall grass behind the barn because they’ve never been threatened there before.

If you can break down barnyards to identify prime hiding spots for deer without stepping foot in the bedding areas, then you have a chance—though likely just one—to surprise a bruiser. Internet satellite imagery, like that provided by Google Earth, allows you to study this terrain from above and see where bucks are likely to bed and how they are likely to get there.

Where to Look
I found my first barnyard honey hole while rabbit hunting when I was a teenager. The farm adjacent to the one I grew up hunting deer on in north-central Indiana was partially abandoned. No one lived in the old farmhouse, but the farmer stored equipment in the outbuildings, so there was still regular traffic in and out of the barnyard.

The area comprised no more than 10 acres, but the overgrown flora was waist-high and numerous patches of cedar trees had grown up, creating small, tight thickets. Ag fields bordered three sides of the barnyard, and the back of the property butted up to a thick, brushy, 20-foot-wide ditch. There was even a little tree-lined pond. It was a typical abandoned barnyard, offering the security of rarely breached cover in close proximity to food and water.

One day my uncle caught the farmer leaving the barnyard and asked him if we could do some midday rabbit hunting. The farmer obliged. As we took our first steps into the brush, deer exploded in every direction, including the largest buck we’d ever seen.

As we picked our way through the cover, our mouths hung open. Cedar trees were rubbed bare and the twisting network of trails looked as if buffalo had made them. Matted beds and piles of scat told us that we’d found a heavily used bedding area. The lightbulb went on, and I’ve been hunting barnyards ever since.

How to Hunt
Barnyards are intimate locations that are easy to mess up. The reason deer spend time in them is that they become accustomed to the surroundings and the action that takes place in close proximity to where they’re hiding. At the first sign of change or intrusion, they’re gone, and it’ll be a while before they come back.

With that in mind, you need to hunt the fringes of barnyards, the areas where deer expect humans to be. Figure out how and where the deer are entering and exiting the barnyard, and set up along those travel routes. Fencerows and ditch banks are prime stand locations. If there is a cluster of trees where you can set a stand high enough to be able to look down into tall grass and brushy areas while remaining concealed, don’t think twice about hunting that spot.

Set Up Right
Small tracts of land are often the easiest to obtain permission to hunt because so many others overlook their potential. If you know of a farm with a thicket, an overgrown field, or a couple of adjoining fence­rows close to the barnyard, you might be looking at an untapped honey hole. Figure out how deer are accessing these secret spots and cut them off on their way in or out. Don’t foul the area by charging into the middle of it.

My little abandoned barnyard has been producing bucks in the same manner for more than two decades. Perhaps my secret is now exposed, but I live a couple of states away, so who am I to hog a prime spot? I just hope the next guy to hunt that barnyard appreciates what remains one of the most rewarding spots I’ve ever hunted.

Looking for big bucks in other unlikely hiding spots? Learn how to hunt whitetails in the weeds.