Whitetail Deer: Six Things You Should Know About the Rut Pregame

As deer hunters, we all live for the rut. Unfortunately, this is also the first time many of us have... 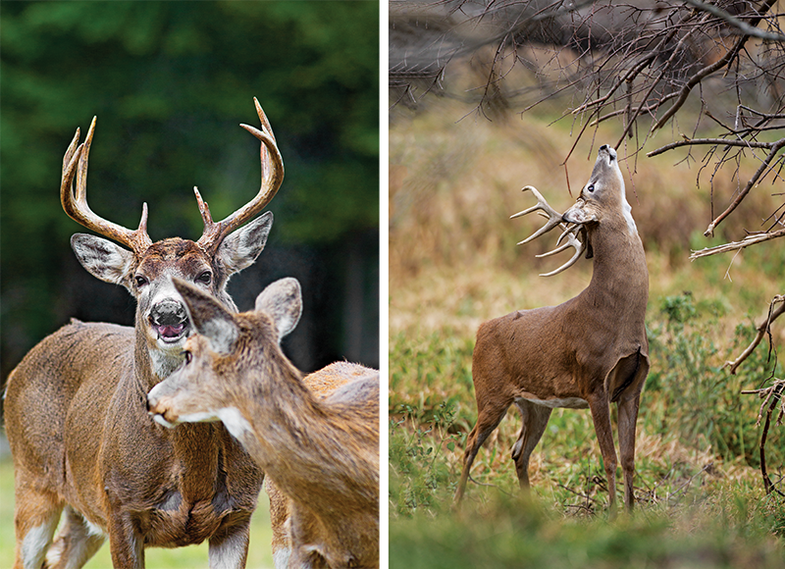 As deer hunters, we all live for the rut. Unfortunately, this is also the first time many of us have a chance to enter the woods all fall, which means we’re already behind the eight ball with regards to deer recon. The good news is you don’t have to have hunted every day since early September to have a shot at a mature buck now. Take a day before things heat up to scout your woods, and keep these six factors in mind as you hatch your rut game plan.

1. Wind
This seems like a no-brainer, but it’s more complex than you might think. Sure, you need to know the direction of the prevailing winds, but you also need to have entry and exit strategies in case the winds shift. Understand that bucks will also take advantage of the wind when does come into estrus, and will likely be searching with the breeze in their face. This can help you pinpoint places to intercept bucks as they move away from bedding cover to pursue does. Don’t forget to account for thermals—air that rises in the morning as it warms and falls in the afternoon as it cools.

2. Rubs
While rubs aren’t the best site to kill a buck, they can tell you a lot if you know what to look for. Bucks make several rubs each year, sporadically in late summer as they shed velvet and increasingly as the rut approaches. Trying to judge a buck’s dimensions by the size of a rub isn’t always possible, but you can glean information about preferred travel routes. In September and early October, bucks rub primarily in areas where they travel most, so those early-­season rubs can help you get intel on a buck’s movements, and knowing his travel routes puts you in position to make a shot.

3. Bedding Areas
There’s often a difference between bedding areas used by bucks and does, so simply finding a patch of folded-over alfalfa in the corner of a field won’t tell you much. On one of the properties that I hunt, does frequently bed on a high ridge on the border between a narrow finger of trees and a crop field. The two biggest bucks I’ve shot in that area, though, were both bedded in flood debris and rushes on an island in a nearby river, and killing them was a matter ofdetermining how to intercept the deer as they left the perimeter of their sanctuary.

4. Habitat Edges
Deer thrive on the edges where two primary habitat types meet, and these areas become natural corridors for whitetail activity during the rut. Bucks will use these edges to feed, survey the surrounding areas, and travel. Focus your scouting efforts on a well-established habitat edge, and there’s a good chance you’ll intercept a buck just after sunrise or just before sunset.

5. Doe Activity
Sure, you’ll spend most of your time figuring out where the bucks are hiding, but the big boys are going to be looking for females—so you need to have a bead on them, too. Sooner or later, as the temperature drops and the days grow shorter, that band of does you’ve watched feeding in the same field all fall will be dogged by a grunting, slobbering buck. If his bedding area is point A and the does are point B, figure out a stand site on a heavily used travel corridor or rub-lined habitat edge that lies between the two and be ready as the sun goes down.

6. Pressured Areas
There is no question that big bucks alter their patterns to avoid humans, and that’s something you need to take into consideration. On one farm where I hunt, the adjacent property seems to have an open-door policy. The trucks and ATVs increase in number in October, and by early November the place is a small village of tents and campers, and the air smells of exhaust fumes. If you hunt a property that you don’t have exclusive rights to, look for obvious signs of human encroachment: ATV tracks, litter, freshly cut limbs, and so forth. When you find these places, stay far away and bear in mind that easy access only translates to more hunters when the rut is in full swing, which can cause an abrupt shift in whitetail activity.