I had just put a bird’s nest in Kevin VanDam’s new spinning reel. It was two days before a big... 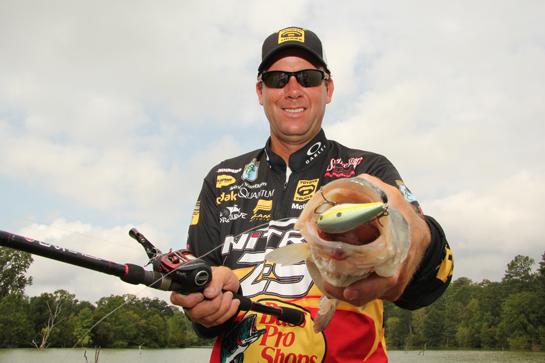 I had just put a bird’s nest in Kevin VanDam’s new spinning reel. It was two days before a big tournament in Upstate New York and the best bass angler on the planet was getting more serious by the minute. So when he spotted me in the back of his boat trying to discreetly untangle the reel he had lent me, he dropped his rod with a let-me-see-that look.

He snipped the line, pulled the reel from the rod, dropped them both in the bottom of the boat, and pulled out a new rig for me to tangle. KVD is a genuinely nice guy, but he won’t put up with BS.

Once he got me fishing again, he took some time to answer the questions that you’ve always wanted to ask him.

OL: Does it really matter what kind of line you use?

Kevin VanDam: Yes. In most situations I throw fluorocarbon. It’s low in stretch, so it increases the sensitivity and is almost invisible to fish. The only thing I use monofilament line for anymore is fishing topwaters because fluoro sinks. I use fluoro probably 80 percent of the time, braid 15 percent, and mono 5 percent of the time.

KVD: In certain times and in certain places, it’s unbeatable. A good example is wild shiners down in Florida. But in a lot of places, I’d much rather fish with artificials than live bait, because with artificials you can cover much more water and find where the fish are. But if you know a spot where there are ton of bass, then, yeah, live bait is going to outfish your artificials much of the time.

KVD: On slow-moving baits like jigs and plastics, there’s no doubt that scent is a factor. What I think that scent does in a lot of cases is get that fish to hold the bait longer and give you a chance for a better hookset.

OL: Does it bother you that the world record bass was caught in Japan?

KVD: Not at all. I think, just like in the world of whitetails, where there are a lot of people trying to grow a world record, it will probably happen again. You know, down South in some pond or in California–someplace private–somebody is going to come up with a 24-pound bass.

KVD: Alabama rigs aren’t banned from our tournaments–we’re just not allowed to use any rig that has multiple lures. The Alabama rig is super effective. I have a lot of fun throwing it when I’m fishing just for kicks. But I think in professional tournaments, I like the idea of just one lure. With the Alabama rig, it’s to the point where the fish can’t even help themselves. It’s sensory overload–they can’t help but bite it. It’s worth the hype, though.