A brutal blast of winter’s wrath brought a bone-chilling start to the Bassmaster Classic on Grand Lake O’ the Cherokees.... 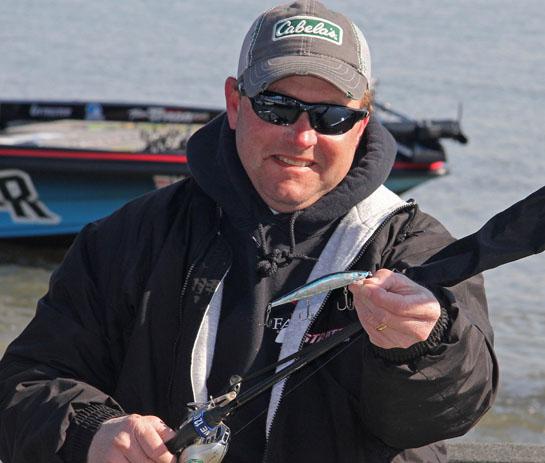 A brutal blast of winter’s wrath brought a bone-chilling start to the Bassmaster Classic on Grand Lake O’ the Cherokees. Warmer weather’s on the way, but with water temperatures in mid-40s the sluggish bass require some coaxing and a jerkbait fits the bill. A great lesson for bass fishermen throughout the country as spring slowly marches its way northward.

Cold-water specialist Mike McClelland of Bella Vista, Ark. placed ninth on day one with a 5-bass limit of 17 pounds, 15 caught on his signature Spro McStick jerkbait. For him, a suspending/slow sinking bait is a good bet from December until the bass move up to spawn. Designed to dive to a certain depth and then hang there vulnerably until twitched, these baits mimic a cold-stunned, or dying baitfish – an easy meal for lethargic bass.

Four-time Classic champion Kevin VanDam is known for his power-fishing prowess, but the pro from Kalamazoo, Mich. said he’s had to force himself to fish slowly. The bass, he said, have particular preferences for bait speed and that may change as a day’s sunlight and water temperature increases. VanDam stressed the importance of paying attention to when, where and how you get bit and adjust as needed.

McClelland agrees: “You have to figure out if they want one twitch, two twitches; do they want a pull and a pause. Cadence is the key, and figuring out how long you need to let a bait sit before you move it again. Generally, you let a bait sit a little bit and when you twitch it, that’s generally when one gets it.”