I’m not impressed by much. In fact, I’m a bit of a skeptic. If a crankbait promises to dive fifteen,... 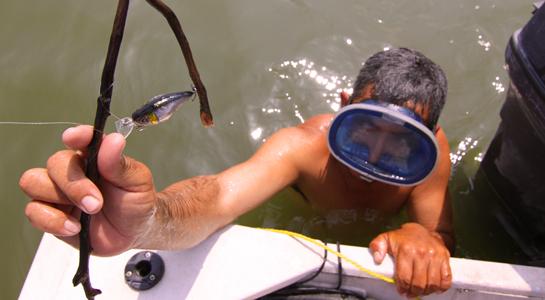 I’m not impressed by much. In fact, I’m a bit of a skeptic. If a crankbait promises to dive fifteen, I know it won’t dig more than seven. For me, it’s how I’m programmed. You know–genetics; chromosomes, DNA, nucleotides, RNA and genomes.

So, by not expecting too much, I’m typically not disappointed when real-world performance falls short of the marketing hype. I mean come on–are we really to believe a single paper towel can inhale an entire liter of ill-placed grape juice? I’ve never dribbled anything that didn’t require the entire roll (and then a couple old bathroom towels for backup).

My cynicism and I were recently invited to visit Lake El Salto in Mexico. El Salto is arguably one of the top three bass fisheries in the world. Its hazel-hued waters, massive stands of timber and shear rock walls shelter largemouth’s bigger than most fishermen’s lies. El Salto’s shore is home to Billy Chapman’s Angler’s Inn. Chapman’s operations have an international reputation for stellar fishing and service. Now, when someone starts throwing the “S” word around–I grimace (refer to previous genetics discussion).

Well, I can tell you the Chapman hype is well-deserved. While there, we caught plenty of ill-tempered fatties, and the service was stellar. Case in point. One afternoon, I drew super-guide “Martin” (pronounced “Marteen”). While cranking in deepish water, I managed a two-treble snag of a sizey hardwood. One seemingly unwilling to relinquish my lucky Sebile “Crankster” no matter how feverishly I yanked or how progressively louder my hissy-fit turned.

Without warning, Martin stripped down to his nothingness, slipped into a crusty old swim mask and over the side he slid. He was in faster than I could say: “no, you don’t have to do thaaaaat…” Well, some bubbles and a bit of thrashing later, Martin pops back up like a bait-stripped bream cork with my lucky bait in tow. I thought I was going to weep. The only way I could have been more impressed would have been if he’d had a 22.5-pounder in his teeth and was riding a lassoed mermaid.

All kidding aside, Martin’s effort was typical during our stay at Chapman’s iconic bass haven. Oddly enough, after dealing with a few genetically inferior TSA agents on the trip home–I’ve decided the “stellar service gene” is in the Mexican water. You know, the stuff us American’s aren’t supposed to drink.