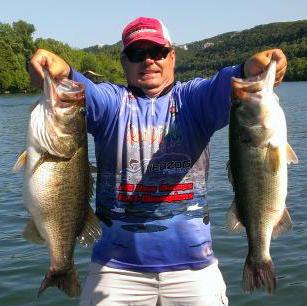 It’s no secret that castable umbrella rigs hold big-bass potential, but when Pflugerville, Texas angler Donnie O’Neal cast his YUM Flash Mob Jr. into Lake Austin on April 28, his rod loaded up with what he thought was the stud he was seeking for the Texas Sharelunker Program, which recognizes bass over 13 pounds.

Bad news: It wasn’t a baker’s dozen bass. Good news: The catch weighed 19.6 pounds. Cool news: It was a massive double-header that included a 7.8 and O’Neal’s personal best bass that weighed 11.8. Both were released after O’Neal’s big catch photos.

Initially, the powerful surges and a stubborn fight that remained deep had O’Neal thinking he had hooked a bass of another breed.

“As the fish came up I noticed that it looked like the letter ‘L’ facing downward, then it became apparent that it was not a striper, and not just one fish, but two bass, and they were huge!

“I let out the biggest holler. I’d never caught a double-digit bass, and I’d been searching a long, long time for one.”

The Flash Mob Jr., along with its full-sized version, includes a willow leaf blade on each of its five arms. The blades add flash and swimming motion to simulate the baitfish schools that spring bass target.