How to Catch Muskies by Reading Weather and Water Temperature

When muskies scatter for the summer, you need a plan for tracking them down 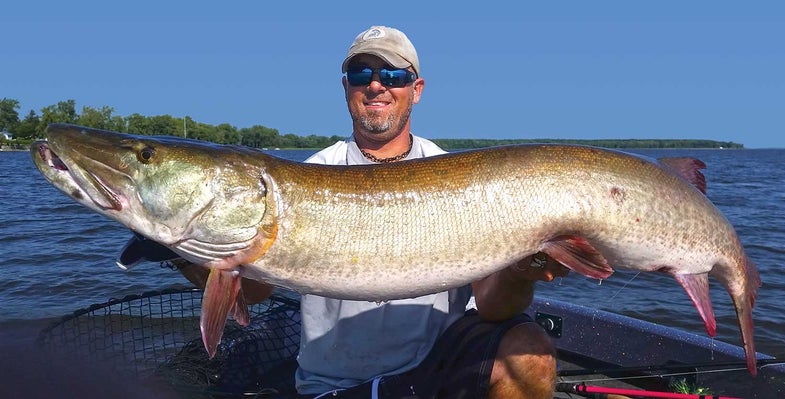 The weather last spring on Michigan’s Lake St. Clair was tumultuous—a warm early May was followed by a spate of cold. In June, the weather turned downright hot. Temperatures soared into the 90s, and the water temperature spiked 9 degrees. By all standards, the muskie fishing was off.

“I went to a spot that I usually don’t fish until early July,” says guide Mike Hulbert. “It was a deep, open-water area. But with nothing much to go on, I decided to play a hunch just to see if the fish were out there.”

His instinct paid off.

Hulbert, who spends 225 days a year on the water, began firing swimbaits—casting and retrieving them fast and high in the water column. And the fish destroyed them. In fact, he and his clients took 12 muskies that day, ranging in size from 36 to 52 ½ inches. It was a stellar day.

Although Hulbert currently splits his fishing time between Michigan and Kentucky, he has tangled with muskies throughout the Midwest. And no matter where he might be, his strategy remains the same. While other muskie anglers continually want his advice on lure selection, he’s quick to explain that the key to his seasonal success is far more dependent on the when of the equation than the what.

General weather patterns—more specifically, water temperatures—tell Hulbert where fish might be holding. This is the first piece of the puzzle. Part two is the daily weather pattern, such as fronts, clouds, wind, and sunlight. The conditions dictate what he throws, and how deep and how fast he fishes. With both pieces of the puzzle in place, Hulbert can find fish and present baits in a precise strike zone. Here’s a closer look at his strategy for muskies up North or down South.

When the season gets underway in the northern reaches of the muskie range, fish will still be very close to spawning areas. Shallow, warming bays, ranging in depth from 3 to 5 feet, are target zones.

“I am primarily looking for new weed growth,” says Hulbert. “If there is none, muskies will hold in the old weed growth, even if it’s dead.”

If action isn’t good in the shallow bays, pull back to the first break in 8 to 10 feet of water near the spawning areas. Sometimes the muskies will stage on these breaks. If it’s too early for any vegetation at these depths, focus on structure.

Hulbert uses small bucktails with No. 6 or No. 8 blades for weeds or breaks, and fishes them just below the surface with a medium to fast, straight retrieve. Bucktails are especially good when there is a warming trend.

Finding fish in late spring and early summer can be very different down South. Water temperatures can vary from the 80s in Kentucky to the 60s in Minnesota. Therefore, muskies will stage in very different locations at this time of year. Fish in Kentucky might be two months past the spawning phase, whereas in Minnesota or Wisconsin, the fish will only be two weeks post-spawn.

Most fish now will be found on steep contours bordering the main lake structure. Therefore, muskies anglers should focus on deeper water, ranging from 16 to 45 feet. Some fish will even be found suspended in open water. The muskies here are following food and searching for their preferred water temperature.

Once Hulbert finds fish, he relies on swimbaits to get the job done.

“I use two big soft-plastics. One is called the Bulldawg and the other is the Medussa,” says Hulbert. “The reason I like them is because you can control the depth. If you want to work them slow and low or fast and high in the water column, you can do either.”

If it is a cloudy and windy day, the baitfish will be high in the water column, and the muskies will follow the baitfish up.

On bright days, forage is deep—the low-and-slow approach puts you in the muskie game.