Editor’s Note: This summer we’re checking in with a different bass pro every week to get the scoop on their... 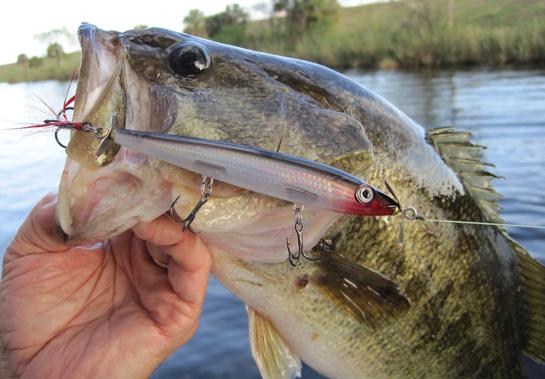 Bernie Schultz has fished competitively for almost 30 years on the Bassmaster Elite Series and the FLW Tour. He won the 1990 Canadian Open and the 1993 Canadian Cup, and has qualified more than a dozen times for the Bassmaster Classic and Forrest Wood Cup championships. Schultz is also a diehard antique lure collector. We asked about his favorite summer bait for Florida, but this prop pick works great for bass in other regions, too.

The Lure
The Rapala X-Rap Prop has counter-rotating stainless steel props made specifically for the lure. The props chatter instead of just spinning, and the counter-rotating blades help it track straight during the retrieve.

“In Florida, with all the tannin water, I generally go with the Olive Gold color, and that’s probably my first all-around choice. The exception would be if I’m trying to match shad and then I’d go with the Pearl Gray Shiner or Silver. If bluegills are spawning I’ll go with the Yellow Perch color around bream beds. That little bit of orange on the bottom of the front is like dynamite to them.”

The Tackle
Fish the X-Rap Prop on a medium-heavy Shimano Calais rod (6-foot-6 for precise “tight spot” casting; 7-foot for open water) with 17-pound test Suffix Superior monofilament and Calais reel. The monofilament is heavy enough so the bait doesn’t overrun the line and foul the front prop. With lighter or heavier line, you run the risk of twitching the bait into the line. Monofilament is key, too, because fluorocarbon sinks and you don’t want the nose of the bait diving. Tie directly to the lure without a snap or split-ring.

Where to Fish It
Focus on areas around boathouses and docks, on the edges of grass lines, deep or shallow grass lines, contours with different depths of vegetation, and in giant grass fields with pothole openings for targets.

“Those openings could be the size of car hood or a garbage can lid, but if you can make a cast and get one or two pulls in that open spot, there’s a great chance to catch big ones. It may be tedious, but if that’s the pattern then I’ll run that all day. In summer this is a great low-light bait, for fishing before or after thunderstorms and at nighttime. It’s a super bait for nighttime fishing.”

When to Fish It
“In Florida it’s a year-round bait. You just have to dodge cold fronts sometimes early in the year. I’ve had stupendous days in January and February with it. I caught a 9-pounder on it at Okeechobee in January with Mark Fisher from Rapala during some testing. But it’s a solid bait anytime of the year down here.”

How to Fish It
“I’ll make a long cast to the target or just past it, let the bait rest and let the splash rings settle before I ever move it. A lot of times it’s a sight fishing thing, a very visual presentation. You have to be aware of what’s going on beneath your lure. Maybe you can see them dimple the lure or touch it. Bass are curious. They’re checking to see if it’s wounded, real or what’s going on.”

“I also want the fish to know the bait is in the area and if you move it too early, you’ll defeat the process. So I let things settle down. Then I give it two short pulls. Not aggressive, not like a popper, but I want the props turning and the bait to move about 6 to 12 inches. Then I’ll let it sit again and watch it. I want to fish it slow himself. Florida bass are notorious for waiting, studying a bait, and being finicky.”

“This could be different for the species of bass and the time of year in other parts of the country, too. I’m talking about Florida for this. This whole thing is based on patience and observation. You have to watch what’s going on. You have to exercise discipline and be patient to make it work. In Florida the fish will look at it for up to a minute sometimes. Twenty to thirty seconds is not unreasonable between pulls because you may be on the pattern to catch huge fish. But if you have the discipline to do that, you’ll catch the fish other people won’t.”

Why It Works
“I’m not going to say this is the go-to, all-time prop bait, but I really think the body size, the specific props designed for it, and the clattering noise it makes—those all make a difference. I’ve learned over the years that the clattering sound created by the props and the hardware is better than a lure without [the noise]. We spent two years working on this specific bait before bringing it out.”