For the majority of flyfishermen, the basic rig is very simple: a single fly tied to the end of a... 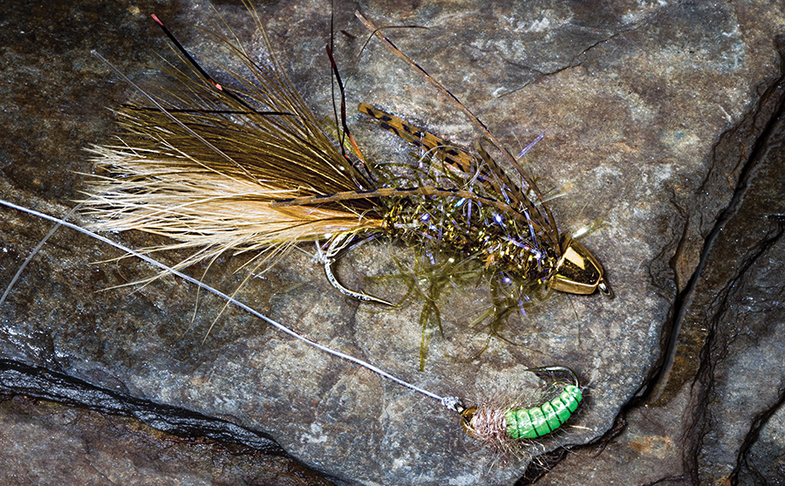 For the majority of flyfishermen, the basic rig is very simple: a single fly tied to the end of a tapered leader. Let the casting begin. It all obviously works fine—most of the time. But what if I told you that, in many situations, you could increase your catch rate by fishing two flies instead of one? Further, what if I added that creating such a tandem rig is much simpler than you imagine?

Multi-fly rigs have been around for hundreds of years—in fact, British fishermen in the late 1800s were known to use “ladders” or “straps” of up to 10 flies at once—but the practice gradually fell out of favor in this country. Building a special leader with a dropper line on the tag end of a blood knot always seemed pretty fussy to me. But then one day I saw a Montana guide simply knot the dropper to the bend of the top fly, and I mentally slapped myself for not having thought of such a simple solution on my own.

True, tying an improved clinch knot to the bend of a hook isn’t as easy as tying one at the eye—the loop at the bottom of the clinch knot tends to slide off the hook just as you try to thread the tag end through—but you can solve this problem by simply holding the top fly upside down (point up). The length of the dropper line should be determined by the water depth and speed, but 18 to 24 inches is a good place to start. If you still struggle with creating tandem rigs on the water, tie the two flies together at home and carry the complete rigs in leader envelopes. Then all you have to do is tie on the top fly, and you’re in business.

Useful Combinations
Once you’ve mastered tying the in-line dropper rig, your options are wide open. Here are a few of the common situations and strategies in which two flies work better than one.

1. Two Dry Flies
If you know exactly which flies the fish are hitting, you can simply tie on two of the same pattern, thus doubling your chances of a strike. Or use this to figure out which pattern is working best, since you can test twice as many patterns with a tandem rig.

When fish are feeding on tiny flies, it can be difficult to see your minuscule imitation on the water. If that’s the case, tie on a big, bushy fly, and then add the smaller fly on a 24-inch dropper. That way, the larger fly serves as a locator and a strike indicator—when a fish hits the size 22 fly, the bigger size 10 fly will disappear, too.

2. Dry Fly and a Nymph
When you have no idea what the fish are eating and you want to cover a lot of water, use a large attractor-pattern dry fly paired with a generalist nymph—such as a Beadhead Hare’s Ear Nymph or a Prince Nymph—as a dropper. The theory behind this is that you’re presenting each fish with two options. The most popular version of this combo is the hopper-dropper, in which the nymph is attached to a high-floating grasshopper imitation—a rig that’s tough to beat on a late-summer afternoon.

3. Two Nymphs
The double-nymph rig is based on the same theory as the double-dry, and it also helps you control the depth of the flies. If you know that the fish want something diminutive—such as a size 18 Pheasant Tail—right on the bottom, instead of loading up the line with split shot, drop the Pheasant Tail from a heavily weighted nymph. This rig is much easier to cast than one with split shot, and there’s always the chance that some lunker will find your larger offering attractive.

4. Two Streamers
In the fall, when they’re trying to fatten up for the long winter, trout become more predatory. This is when throwing a two-streamer tandem rig can draw savage strikes. Use 16 inches of heavy tippet, 0X or 1X, between the flies to avoid break-offs.

5. A Streamer and a Nymph
This is the least common tandem rig, but it works well in still water. The larger fly will often get even the most lethargic fish interested, and when the nymph comes swimming by, it’s just too hard to resist. An Olive Woolly Bugger followed by an olive, jointed damselfly imitation is a killer combo virtually any time of year.

If you’ve never tried fishing a tandem rig, give it a shot. There’s nothing very complicated about the setup, and it literally doubles your chance of a hookup.