Matt Herren of Alabama has qualified for nine Bassmaster Classic and FLW Forrest Wood Cup championship tournaments along with winning... 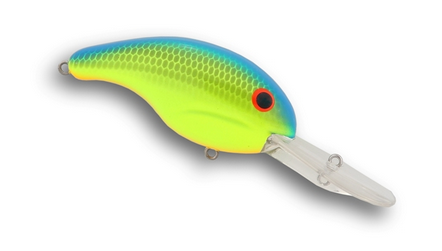 Matt Herren of Alabama has qualified for nine Bassmaster Classic and FLW Forrest Wood Cup championship tournaments along with winning more than $1 million in his career. As an avowed shallow water angler, Herren considers “deep” to be a tidy mid-range ledge, which he works with his favorite summer bait.

The Bait
Bandit Lures 250 Ledge crankbait with chartreuse sides with a blue back.

The Tackle
Herren spools up 10-pound test Gamma fluorocarbon line on a 7-foot-6 inch Kistler KLX crankbait rod and a 6.4:1 reel. It has a bit more speed than a traditional slow-cranking reel, but not as much burner speed as faster reels.

Where To Fish It
Herren scans 8- to 15-foot depths looking for hard bottoms, mussel shell beds, channel bends or ditches, or other cover such as rocks or stumps in those areas. Bass seek hard bottom and cover just like shad, crayfish, bluegills and other forage.

How To Fish It
Use the Bandit for a two-pronged attack that doesn’t rely on the current. In Southern impoundments like the Tennessee or Coosa river systems near Herren’s home, these tactics are the sparks that make fish bite.

“If you pull up and mark fish on some cover or structure and a regular retrieve doesn’t work, you’re going to have to do something to trigger the bite,” Herren says. “I will try an erratic stop-and-go medium retrieve to see if that works. And if not, then I’ll go into burner mode…In the dead heat of summer I burn the crankbait as hard as I can.”

Why It Works
The Bandit 250 is three inches long, so it’s the size of a good shad or bluegill. Herren says when you get on a good bite, “It’s fast and furious.” It may take some time to find them, but when you do, they’re quality fish.

“Fish have been pressured quite a bit by late summer and it seems like you have to trigger one to fire up and bite,” Herren says. “Once you do then they go on a feeding frenzy. In late summer when this big bait comes through as hard and fast as you can wind it, and it’s dancin’ and dartin’ and zippin’ along, you’re taking advantage of a bass’ predatory instincts and he’s going to strike at it.”