The giant bluefin tuna in this video clip literally has the dimensions of a Volkswagen beetle. Or nowadays, to be... 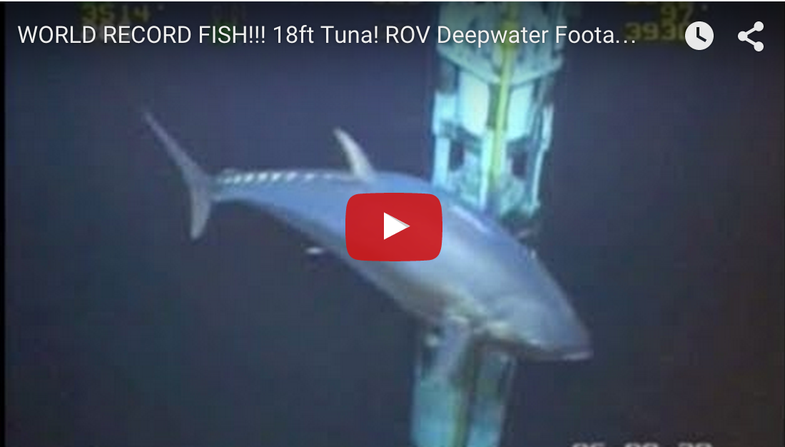 The giant bluefin tuna in this video clip literally has the dimensions of a Volkswagen beetle. Or nowadays, to be contemporary, at least a Mini Cooper. According to the footage, the white pipe the tuna swims in front of spans 4 feet in diameter. If that’s the truth, eyeball estimates put the bluefin at about 14 to 16 feet long, which means this gigantic fish is well beyond the 1,000 pound mark, and probably closer to 2,000 pounds. (Currently, the all-tackle world record giant bluefin tuna stands at 1,496 pounds taken off Nova Scotia by Ken Fraser in 1976.)

This particular footage was taken on a submarine oil rig in the Gulf of Mexico a few years ago, but it’s still awesome to watch—and dream about. Contrary to general thought, bluefin tuna are no strangers to the Gulf as they participate in spawning activities in the deeper section cool waters during May before migrating up along the Eastern Seaboard.

Popular reality TV shows like Wicked Tuna showcase how tuna are caught commercially, but if you want to try to land a beast of such proportions recreationally, you’ll need to be prepared with the proper tackle. You’re going to need: A 6-foot bent butt stand up rod rated for 130-pound test (matched with a 16/0 or 130 class reel if you’re using a fighting chair, or an 80 class reel, if you dare to do it standing up) and spooled with 200-pound hollow core braided line, a 100 to 200 foot section of 130-pound monofilament top shot, a Bimini twist to create a 20 foot length of double main line, a 400-pound barrel swivel, 10 foot length of 200-pound fluorocarbon leader, and finally a size 9/0 to 11/0 3x strong circle hook. Got all that? Now, go drink your Muscle Milk and hit the gym—you’re gonna need all the help you can get once that line starts zipping.