John Scrifes’ handiwork took the world by storm in 2012, when Jennifer Lawrence used his bows in the Hollywood blockbuster... 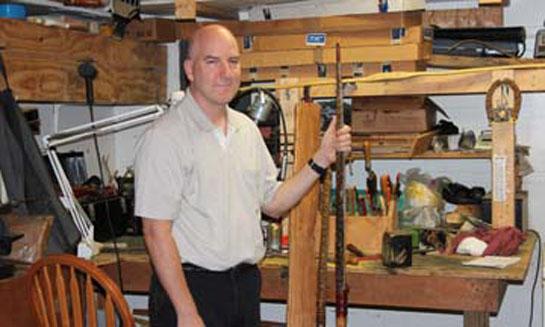 John Scrifes’ handiwork took the world by storm in 2012, when Jennifer Lawrence used his bows in the Hollywood blockbuster “The Hunger Games.” Scrifes became one of the hottest bowmakers in the country when he made Katniss’ bow and three others out of his garage over a three-day weekend.

Scrifes, 46, an Environmental Heath and Safety Specialist at Cornerstone Environmental in Zionsville, Ind., started his love affair with the traditional wood bow in the late 90s. He saw a man — he doesn’t remember his name now — making wood bows at an outdoor show in Louisville, and said that was the moment that ignited the spark.

“I was like man, that’s cool. I really want to do that,” Scrifes said in a phone interview. “So I learned how to make traditional bows on net. The bowsite website was just starting out, and the owner of that site at the time was heavy into traditional [bow making].”

He made his first bow in 1999. But like any true first-time learning experience, it broke halfway during the building process. Every bow after that has been completed. And as Scrifes’ confidence grew, so did the level of quality of his bows.

Scrifes said he always bowhunted and especially enjoyed shooting recurves. He made his first kill with one of his creations in Martin Country in 2002 — using the 10th bow he ever made.

“I shot a 4-point buck that had worked a doe estrus drag back to my tree stand,” Scrifes wrote in an e-mail. “It was a 20-yard shot and unfortunately hit way back into the hindquarters but was a complete pass through that caught the femoral artery and killed him within 125 yards. The bow was a sinew backed static recurve Osage orange bow.”

The Osage Orange that Scrifes uses to make his bows is native to Oklahoma and Texas. It forms an exceptional hedge when kept trimmed. But if left to grow, it becomes well, a thorny tree. Interestingly, according to “Our Native Trees and How to Identify Them” by Harriet L. Keeler, the tree acquired its name, bois d’arc (or “bow-wood”), from early French settlers who observed the wood being used for war clubs and bow-making by Native Americans. Scrifes said only about one in 100 trees is suited to make a bow.

“I’m very fortunate to live in heart of Midwest where, in my opinion, the best Osage grows,” Scrifes said. “I began selling it. I love to cut the wood, season it, and I like having it around. So it became a side business of mine to sell the wood. Then I moved to selling what I call bow blanks. I would form the wood so people who needed a little help getting started had a base to work off. Heck, that’s how I paid for my elk trips out west.”

Scrifes didn’t stop there. He continued to perfect his craft and post photos of his works online (see them on his personal website and his archived web page — something he’s always done since he started bow making. He said wood bow making had a renaissance in the early 2000s, and he found himself mentoring other builders. Word of his quality of work and expertise began spreading through the traditional bow making community.

His involvement with “The Hunger Games” movies started in the form of an e-mail sent to him in April of 2011. A woman from a prop company wanted to purchase four finished bows from him — not the blanks he sold.

“I told her I don’t sell finished bows,” he said. “So I passed her along to some folk who I knew had made bows for sale. But neither one of them had the ability to get this done, and they wanted them quick. Like in less than two weeks quick, which is nearly impossible really. We kept talking and I began to get more interested. She proposed sending me the artist rendition, and see what it would take to get them done. I said yes and she sent them to me. As I was looking them over I noticed a tag on one that said ‘Katniss bow.'”

Scrifes recognized the name and asked his then 13-year-old son James why it sounded so familiar. Scrifes was amazed at what his son told him, so he got on his computer and did a web search. Lo and behold, James was right.

That bow was to be used by Jennifer Lawrence, who portrayed Katniss Everdeen in the then upcoming first installment of “The Hunger Games” trilogy. (The movies are based on Suzanne Collins’ best-seller novels.)

“I was pretty excited,” said Scrifes. “We reached an agreement and I was to make two functional bows and two which are in a permanently drawn position. They’re not in it for very long, only for a few seconds. But at the beginning of the movie, the bow Miss Lawrence is using to hunt with, that’s the bow I made in my garage.”

Even his wife, Kristin, an art teacher, was shocked. Not only at the news that her husband would be making the bows for the film, but also at just how much skill her husband possessed.

“You know, I looked at my husband at one point and said, ‘So you’re pretty good at this, huh?'” said Kristin.

By the time terms were finally agreed upon and all the renditions were sent, Scrifes was faced with the seemingly impossible task of making four bows in three days.

He went out to eat with his wife on the Friday night of that week. He woke up around sunrise, headed for the garage, and began working at his bench. This routine would hold steady throughout.

“I was fortunate with the timing because you can’t jump straight into cutting the wood and making the bow. It has to be seasoned and ready to go. Now that’s typically a yearlong process, but I just happened to have some real quality stuff from the year before. I also had a vacation day to take, so that helped too,” he said.

It took Scrifes 40 to 50 hours to complete all four bows. He said one bow takes him anywhere from 10 to 40 hours, and even longer for fancy constructions.

“But I did have a bit of an advantage since I was essentially making the same bow a few times,” Scrifes said. “I got a bit of an assembly line going and that helped speed up the process.”

Despite this advantage, Scrifes’ wife observed the physical toll it took on her husband.

“When he finally finished everything and shipped it off he was absolutely exhausted,” she said. “He obviously put a lot of time and energy into them, and he was so focused during those three days, that when he finished you could really see how tired he was.”

The artists’ renditions of the bows were complete with typical Eastern Woodland Indian decorations, Scrifes said. One of the design components included a sprig of horsehair tied to the bow, which was used by Indians as a wind indicator.

“Decorating the bows was definitely one of the best parts, but I had a tough time finding the horse hair because I don’t have a horse. Fortunately I had a co-worker who did, and he brought in some,” he said. “But I guess the horsehair was distracting from Miss Lawrence’s hair, because they cut it off. If they had any idea how much trouble I went through to get that horse hair…”

Scrifes also cut off a little hair from each of his three children and added it to the bows.

“I wanted all three of my kids to be in the move, although I’m not sure if Hollywood would approve of that,” he said.

As expected, Scrifes went on to become a bit of a local celebrity.

“It got a lot of play in the local press,” Scrifes said.

Additionally, when he was making the bows for the second film, they sent him back the first ones to help him remember exactly what they wanted.

Scrifes let his friends and family shoot the bow that had been in the movie, and he brought it to his daughter’s sixth grade class for the best show and tell Perry Meridian Academy has likely every seen.

Scrifes went on to make four bows for the second movie — two more for Katniss and two for Peeta Mellark, played by actor Josh Hutcherson. He is not yet slated to make the bows for the third and final movie. The kids in the class had a hand in helping to make the second round of bows, and got to keep a little piece of wood shaving as a souvenir.

“Yeah, I automatically became the coolest dad on the block,” Scrifes said. “If I wasn’t already.”