Waterfowlers, rejoice: The best part of the season is upon us. Sure, the migration’s peak has likely passed by, but … Continued 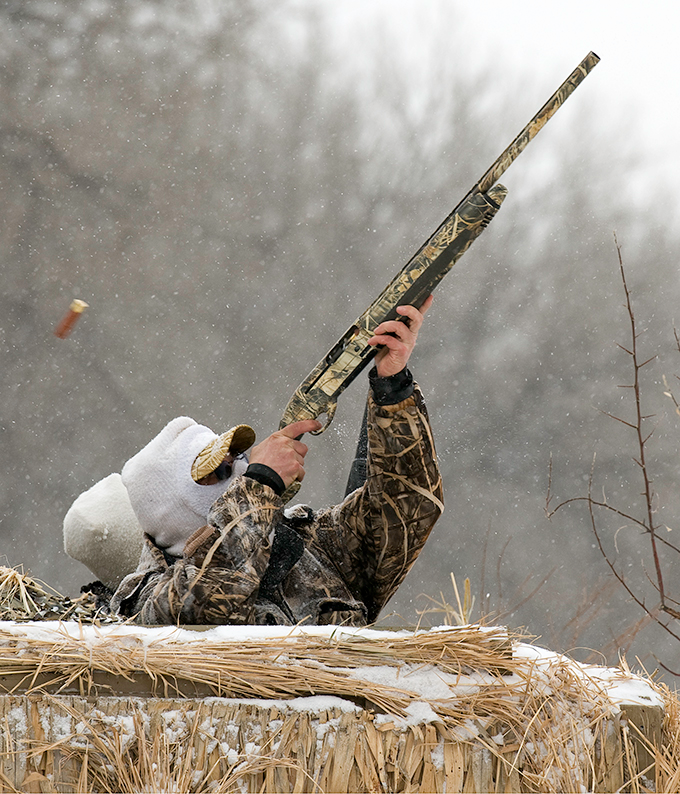 Waterfowlers, rejoice: The best part of the season is upon us. Sure, the migration’s peak has likely passed by, but the remaining ducks are highly concentrated, see fewer competing decoy spreads, and are splendidly plumed. However, conditions are not what they were in October. The weather has turned brutally cold and the mallards’ educated eyes can spot a decoy more readily than ever. Ensure your wingshooting reflects those changes by considering these five points.

1. Go Long
The late season brings with it decoy-wary ducks, so shooters who can hit birds as they skirt the spread are at a great advantage. However, there’s a thin line between a fine shot and “sky busting.” The ethical hunter considers how his gun patterns, his load’s maximum lethal range, and his own limitations.

Focus on the bird’s head. The adage “aim small, miss small” applies here because it’s preferable to center the shot in the bird’s vitals. Match your barrel speed to the bird’s velocity, then accelerate well ahead of it.

2. Increase Velocity
You can enhance your terminal ballistics by increasing pellet size or boosting muzzle velocity. I prefer the latter. By Christmastime, I switch from a 1 ¹⁄₄-​ounce 12-gauge load of No. 2s at 1,450 fps to a 1 ¹⁄₈-ounce load of No. 2s at a whopping 1,675 fps. It delivers just the right amount of oomph, and my Modified choke produces 70 percent patterns on a 30-inch target at 40 yards. A 1 ¹⁄₄-ounce load of BBs (about 90 pellets) lacks the pattern density and consistency of a 1 ¹/₈-ounce load of No. 2s (about 140 pellets).

3. Dress Smart
By all means bundle up, but do so smartly: You have to be able to move and shoulder the shotgun. Fortunately, this task has never been easier than with the thin polyester base layers now made, such as those by Under Armour. Atop that I like good old-fashioned polypropylene underwear, available from Avery Outdoors or Army surplus. It’s sufficiently thin and I’ve never found a warmer material. Even with the addition of a heavy 3-in-1 parka, length of pull is only modestly increased.

4. Don’t Get Snagged
Even while wearing moderately heavy clothing, it is still possible to snag a shotgun while bringing it to shoulder. You can lessen this tendency by selecting a butt pad that is slick and made without sharp edges. Many duck guns are so equipped; if yours is not, consider an aftermarket pad by Pachmayr or Kick Eez.

Adjust your shooting form. I ready my shotgun with the buttstock just below the pocket of my shoulder. All I have to do is ease the comb to my cheek to fully mount the gun, reducing the tendency for a snag.

5. Keep Shooting
For many hunters, December heralds the arrival of canvasbacks, scaup, and other divers known for their ability to absorb shot. I doubt they’re any tougher than mallards, but certainly they’re better equipped to elude retrievers by escaping underwater. So, follow through and keep shooting. This is a good habit to develop with any duck, but it applies doubly with divers.

If the duck is flapping as it drops from the sky, pull the trigger. If it’s on the water with its head raised, keep shooting until it is belly-up.