After an ugly legal battle, the Montana wolf season finally opened earlier this month and so far six wolves have... 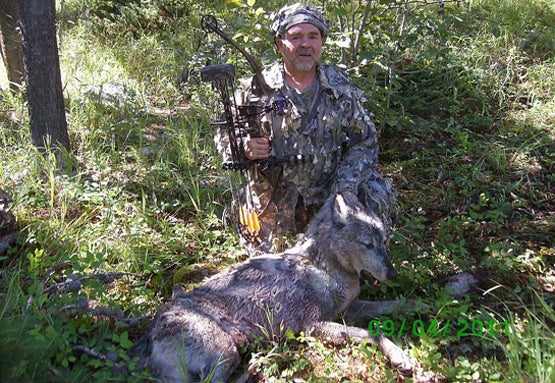 After an ugly legal battle, the Montana wolf season finally opened earlier this month and so far six wolves have been taken by hunters according to the Fish, Wildlife and Parks website. The first wolf was killed by a bowhunter on the second day of the season. There was no archery hunt for wolves in 2009 and FWP says this wolf was the first one taken by stick and string in the state’s recent history.

By law, Montana is not allowed to release any information on wolf hunters, unless the hunter agrees to it. This is because in the past anti-hunters got information on tag holders and then harassed and threatened them. But Marc, the first bowhunter to legally kill a wolf in Montana in more than 70 years, wasn’t worried about animal rights activists (he’s an ex-marine) and agreed to do an interview with Outdoor Life. We’re omitting his last name to keep the bad guys off his back.

This is the story of his hunt…

Marc was bowhunting for elk with his brother and a buddy in the Beartooth National Forest on September 4th. Earlier in their trip Marc’s partners heard wolves howling, but they hadn’t spotted any of the animals in the area. That morning, Marc hiked about a mile from camp to a meadow that was rimmed by aspens. The grass in the meadow was three feet tall.

Soon enough, Marc heard an elk bark a warning, so he sat quietly and waited to see what would walk out. After about half an hour, he crept up to the area where he heard the bark come from.

Then, out of the corner of his eye, he spotted a big wolf, about 170 pounds, walking down a game trail toward him. At 20 yards the wolf stopped and the two hunters stared at each other, neither quite sure what to do next.

“It was probably only for a couple of seconds, but it seemed like a lot longer,” Marc says.

He drew his bow and the wolf turned to slink away. But before it disappeared, the wolf looked back and snarled. Marc took the quartering-away shot at 20 yards and hit the wolf right behind the shoulder. The shot knocked the snarling and snapping animal off its feet.

Before Marc could get up to his wolf, another wolf came in to inspect the commotion. But it soon slipped away into the tall grass without incident. Marc went back to camp to recruit his hunting partners to help pack the animal out, and when they returned they found an elk leg only 20 yards away. They hauled the wolf out of the backcountry and Marc sent it to a taxidermist.

Wolf hunting is a charged subject in the West and it’s no secret that some hunters have a vendetta against the animal. There’s a small faction of the hunting community that points to declining game populations and demands that wolves be swept from the landscape. But this isn’t the case with Marc. He doesn’t hate wolves, he’s just glad he got the opportunity to hunt them.

“Each year I buy every kind of tag that I can. There’s always a chance; you never know what you’re going to run in to. If I don’t [fill my tag] then I figure I’m helping contribute to hunting and conservation with the money I spend,” he says.