A 56.9-pound mahi mahi caught this month has set a new Delaware state record, according to the Delaware DNREC. William... 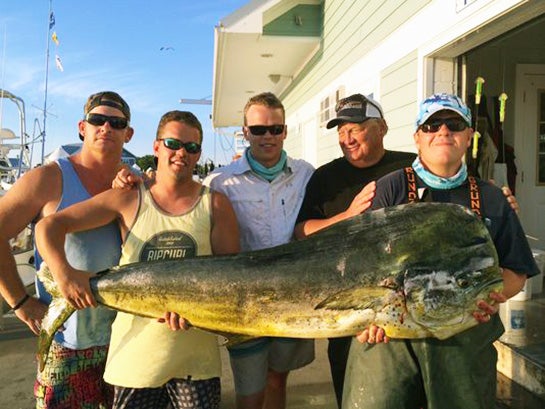 A 56.9-pound mahi mahi caught this month has set a new Delaware state record, according to the Delaware DNREC.

William “Butch” Emmert of Rehoboth Beach hooked the fish while trolling an artificial ballyhoo rig and blue and white Ilander in about 360 feet of water, reports the Delmarva Town Crier. Emmert landed the fish on the deck of the Elizabeth Jane, which is captained by Jason King. Capt. King targeted the tip of the Baltimore Canyon for this record-setting fishing trip, which also yielded several smaller dorado and a 102-pound mako shark.

The catch bested the previous state record by nearly four pounds, which had stood since August 2003. It was determined a Delaware state record because the Elizabeth Jane ported both out of and into a Delaware marina. Fish and Wildlife enforcement officer Senior Cpl. Casey Zolper verified the fish’s weight at Hook ‘Em and Cook ‘Em Outfitters.