A 64-year-old east coast man is recovering after falling into a canyon in Utah and crawling through the desert for... 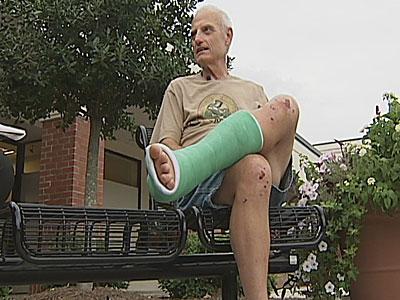 A 64-year-old east coast man is recovering after falling into a canyon in Utah and crawling through the desert for four days, while suffering from a broken leg, dislocated shoulder and dehydration.

Wayne Richards of Concord, North Carolina spent four days crossing a small portion of the Utah desert after breaking his leg on a solo hike.

Without cell phone service to call for help, and with only two protein bars to eat, Richards began crawling back to his car across the rocky terrain. He filled his water bottles with occasional rain water as he painstakingly retraced his steps, eventually dragging himself a distance somewhere between five and seven miles. He used his camera bag to pad his knees against the pain of crawling over the rocks.

The most ironic part of the story is that he chose his desert destination after being inspired by the story of Aron Ralston who almost died in that very same canyon. In 2003, climber Aron Ralston hiked into the same canyon by himself, without telling anyone his plans. He became trapped by a boulder that pinned his arm, and was forced into the grisly act of cutting off his own arm to get free. Ralston went on to detail his struggles in a book, which was later adapted into the movie “127 Hours.”

Mr. Richards is now recovering at home, and he told the local news that he wanted to hike Little Blue John Canyon after he saw the movie “127 Hours.” His own solo trip didn’t end much better than the movie, after Richards fell 10 feet, broke his leg and dislocated his shoulder on September 8th.

“It took me about 3 or 4 minutes to work my shoulder and get it back in place…” Richards told WBTV in Charlotte last week after his story started getting national attention. Check out more on this story at WBTV.

“I was actually following my GPS, crawling right on top of my feet print that I had hiked in on,” Richards said.

Park Rangers first began looking for Richards September 9, after his campsite was found unattended. Denny Ziemann, chief ranger for Canyonlands and Arches national parks, said that they discovered Richards’ car two days into the search at the trailhead for Little Blue John Canyon, which is part of the recreational area, but technically outside park boundaries and the park’s jurisdiction.

According to Ziemann, “The search was pretty quick and dirty” once they realized where Richards had gone. Just a few hours after the rescue effort began at the infamous canyon, Richards spotted the search helicopter and used the flash on his camera to catch the pilot’s attention. By the time he was rescued, Richards had almost made it back to his car. Richards told reporters that he believes his engineering background helped him think logically and survive the ordeal.

I think he missed two main themes of the survival movie that started all this. Theme One: never go out alone. And Theme Two: make sure somebody knows where you are going. “It feels good to be back,” Richards said last week. I’d say he’s very lucky to be back.

Let us know what you think of this story in our comments section.