Survival Cooking: How to Make a Snowshoe Grill

Skewers and spits are hard to beat for quick cooking accessories; but if you have a little more time and... 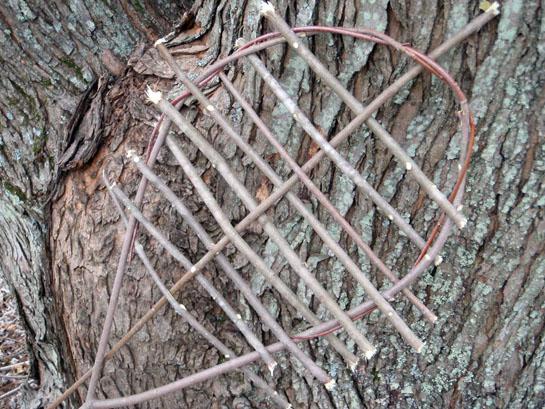 Skewers and spits are hard to beat for quick cooking accessories; but if you have a little more time and some flexible sticks, you can bend together a snowshoe-shaped grill to cook meat, fish, and many other tasty foods–with no heavy skillet required.

The snowshoe grill (also called a tennis racket grill) can be used as a portable, reversible cooking surface. If it’s not too low to the flames, you should be able to cook several meals with it before it burns up. Cooking your food like this can give you greater control over temperatures than you have with other cooking methods, as the distance of the food from the fire can be modified easily.

To make this grill, start with greenwood sticks and one large forking branch. Wood choices abound. I used red maple for the photo, but any hardwood or medium-hardwood will work fine. Maple, ash, and dogwood give you lots of natural forks in each branch due to their opposite growth pattern. Just steer clear of buckeye wood, which would make a good fork with its opposite branching, but contains dangerous toxins and tastes terrible.

Once you have your fork and some extra twigs to weave the grill, bend the fork into a hoop, twisting the branch tips around each other until they hold their shape. Then lay one long straight twig down the middle of the hoop. Start weaving shorter twigs into the hoop, with an over-and-under pattern. If it’s tight and difficult to weave, that’s good. The grill should be rigid and secure. Carve a point on the end of the forked stick to stab into the ground, and prop the grill over the fire using rocks or other forked sticks.

When cooking with this grill, it’s best to:
– Have a good bed of coals fed with hardwoods, if possible.

– Use only greenwood; and leave the bark on the sticks to keep the pieces from drying out and catching fire.

– Avoid wood that breaks easily (i.e. tulip poplar) and avoid wood that is sticky or crusted with pitch and resin, like pine, spruce, and fir.

Ever made a grill like this? What’s your favorite food cooked on a stick? Let us know in comments.