Can CWD Really Be Cured?

The whirlwind regarding a potential cure for chronic wasting disease heats up. Here’s the latest news 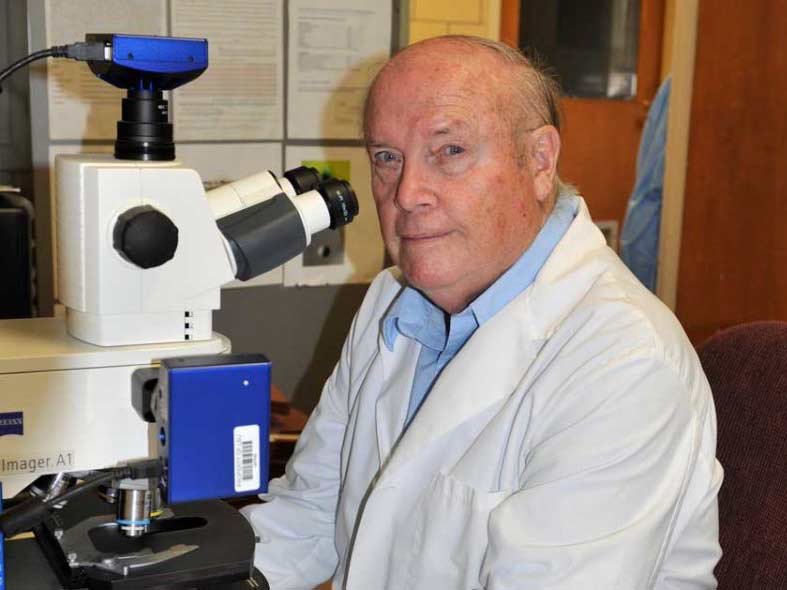 The discussion about Chronic Wasting Disease (CWD) may well have been turned on its ear with the recent claim that a treatment and a cure is in the offing. Outdoor Life has attempted to remain vigilant in reporting responsibly on this critical topic, and so Dr. Frank Bastian’s bold statements regarding curability of CWD (inaccurately dubbed as the Zombie Deer Disease by mainstream media) necessitate analysis.

First discovered at a Colorado research facility in the late 1960s, CWD incidences have grown over the past decade. It is now known to exist in 251 counties in 24 states and two Canadian provinces. If you prescribe to just about every bit of published research, CWD is caused by a deformed protein called a prion. There is no known cure, no concrete evidence as to how exactly the disease is spread, though it is believed to be 100 percent fatal.

But what if it’s not? What if prions aren’t the culprit? What if the disease isn’t what it’s been portrayed to be at all?

Meet Dr. Frank Bastian, a neuropathologist formerly with the Louisiana State University Agricultural Center. Bastian is not some obscure researcher new to the scene of transmissible spongiform encephalopathies (TSE). But he is the subject of the most recent headlines declaring his team of researchers had discovered a cure for CWD.

It’s a bold statement, and it was precisely that — a statement made by ecologist Dr. John Eveland at a press conference hosted by the Unified Sportsmen of Pennsylvania, who cut right to the quick when he stepped to the lecturn.

“We’re here today to announce that we have discovered the real cause of CWD,” said Eveland in early February. “And that we have a cure and field application in 12 to 18 months.”

Those words (and confidence) are inspired by Dr. Bastian’s findings which, he says, provide conclusive evidence that CWD is not caused by prions. It is, according to his research, a bacterial disease that has the potential to be controlled.

“It’s just not possible that it’s protein-based,” said Bastian when Outdoor Life contacted him last week. “We’ve been on the wrong track. CWD is not caused by prions, it’s bacterial. Those bacteria are called spiroplasma. I’ve tested scrapie in sheep, CWD in deer and elk…the spiroplasma are there in every instance. Prions are not. They are the causative agent. And when you find the causative agent, and it’s a bacteria, you’re able to develop antibodies and treat that disease.”

We should pause here for some context. As deer hunters, Dr. Bastian’s discovery — if correct — is a game-changer in the fight against CWD so large that it’s impossible to overstate. But CWD is but one form of TSE. In humans, TSE diseases include Creutzfeldt–Jakob disease (CJD), Mad Cow Disease and transmissible mink encephalopathy in farmed mink. As much as we love whitetails, Bastian’s research could lead to far greater advances that benefit all mankind.

Of course, that is a giant IF. Soon after Eveland’s statement about the “CWD cure” went viral, some wildlife researchers and advocacy groups urged caution bordering on skepticism.

The National Deer Alliance (NDA), for example, posted a response on its website “related to the claim currently receiving a good deal of publicity that spiroplasma bacteria are the causative agents of transmissible spongiform encephalopathies (TSEs) like chronic wasting disease (CWD).”

In that post, the NDA references a number of studies that seem to rebuke Bastian’s findings, including one that states any result proving bacteria as the causative agents of CWD has never been able to be reproduced. That’s where things get interesting. Bastian says that he has, in fact, been able to reproduce his results thanks to advancements in the way the bacteria is grown in a lab environment.

So why do the nay-sayers claim it can’t be replicated? Bastian’s response: “They’ve never tried. The prion group has simply ignored me. They control the funding because they sit on the board of the (National Institutes of Health).”

To Bastian, the evidence that TSEs are caused by bacteria and not protein-based prions is overwhelming.

“It just doesn’t make any sense when you really look at the disease and how it behaves,” he says. “I am highly confident that it is spiroplasma that causes the disease and the research show that to be correct. This conclusion is based upon fulfilment of scientific criteria for causality. The breakthrough has been our ability to culture the bacterium into cell-free media. Now we can characterize it. We have found the isolate to have the identical biological properties of the transmissible scrapie agent as determined in the 1960s.

Being able to culture the bacterium from all TSE materials available has allowed us to complete Koch’s postulates. These postulates are scientific evidence of causality. Since we can grow the bacterium from all cases we have fulfilled that postulate. The second postulate is to isolate the bacterium from the tissues into cell-free media. We have done so and also showed that the spiroplasma isolate grew on agar plates as colonies. The third postulate is to create the disease in normal animals by inoculation of the organism in the cell-free media. We have done that and induced CWD illness in sheep and goats using isolates from CWD-affected deer as well as from scrapie-affected sheep. The fourth postulate is to re-isolate the organism from the experimentally infected sheep and goats, which we have done.”

In layman’s terms: Bastian’s research team believes that it has proven that the novel spiroplasma is causing CWD in deer. If that is indeed the case, it means several things.

Bastian says that over the course of about a year, he intends to create an in-field test kit that hunters can use to test killed animals for spiroplasma on the spot.

“It will be very simple, just a few drops of blood on a card that is reactive. If it reacts, it has the bacteria. Don’t even bother to dress that animal,” he says.

Moving of animals — live ones — to different areas has caused all kinds of uproar between hunters and captive cervid facility owners. If spiroplasma are truly the cause of CWD, animals can be tested while alive using a diagnostic ELISA test based upon the consistent presence of the spiroplasma in diseased tissues. An injectable vaccine might then be created based upon the spiroplasma isolate and protect captive animals in deer farms and Zoos.

“We can inoculate the vaccine into cattle since CWD has been experimentally transmitted,” says Bastian. “The vaccine would prevent disease transmission and reduce the concerns of livestock being transported. We can test, without having to kill the animals, deer and elk that may be transported. Because the disease has such a long incubation period, there is a lot of risk involved because the animals aren’t showing symptoms. Currently, we can only test by killing the animal. Now that we know it’s bacterial, we can test differently.”

The headlines touting a “CWD cure” are somewhat misleading, though perhaps not altogether inaccurate. If the disease reservoir can be eliminated using yet-to-be-found procedures, the disease could be controlled.

“You can potentially treat the disease with antimicrobial treatments,” says Bastian. “In regard to CWD in humans, it doesn’t have to be a death sentence, especially if caught early with the new diagnostic tests.”

And while that would be great news for deer breeders, it doesn’t necessarily mean CWD could be completely eradicated from a wild deer population. The development of oral vaccines and their distribution in the wild could be daunting but the prospects of treating a bacterial disease seem infinitely more possible than the current outlook for CWD control.

“You’d maybe have to figure out a way to round them all up and treat them…is that feasible? That’s really out of my area of knowledge. I’m a neuropathogist,” Bastian says. “Perhaps it could be fed as an antibiotic somehow but, again, to what scale that could be done I don’t know. Certainly I wouldn’t see us inoculating a vaccine into humans. But treating them…yes, that would become possible.”

Read Next: The Worst Week Ever for Montana Deer Hunters: CWD Arrives in the State

Just days after the Unified Sportsmen of Pennsylvania’s announcement of a “CWD cure” and Bastian’s research, word began to circle that Bastian was no longer part of the LSU Ag Center. Social media chatter seemed to indicate that this was proof that Bastian’s research was not legit. Bastian himself, however, said the decision to leave LSU was his own.

“I had decided to move to New Orleans over a month ago. The university had put in a patent application on a live test that I developed for the TSEs. There was a dispute regarding how the application was being submitted. I decided not to sign the patent and, as a sole inventor, they may abandon it,” he said.

It was this patent dispute, Bastian says, that soured his relationship with University administrators. Bastian claims the University tried to “destroy” his relationship with the Unified Sportsmen of Pennsylvania but the group has stood by him and will provide financial assistance to establish a new New Orleans-based lab to continue his TSE and CWD research.

“What I am doing is so important that I cannot get involved in local politics,” he says. “I am finished the end of March, but will leave sooner if my New Orleans lab is set up. My leaving is fully voluntary, and I guess indirectly related to the research in that there was a dispute regarding a patent submission.”