Experts say the future of cold-water fish species like trout and salmon depends on climate restoration, and anglers themselves 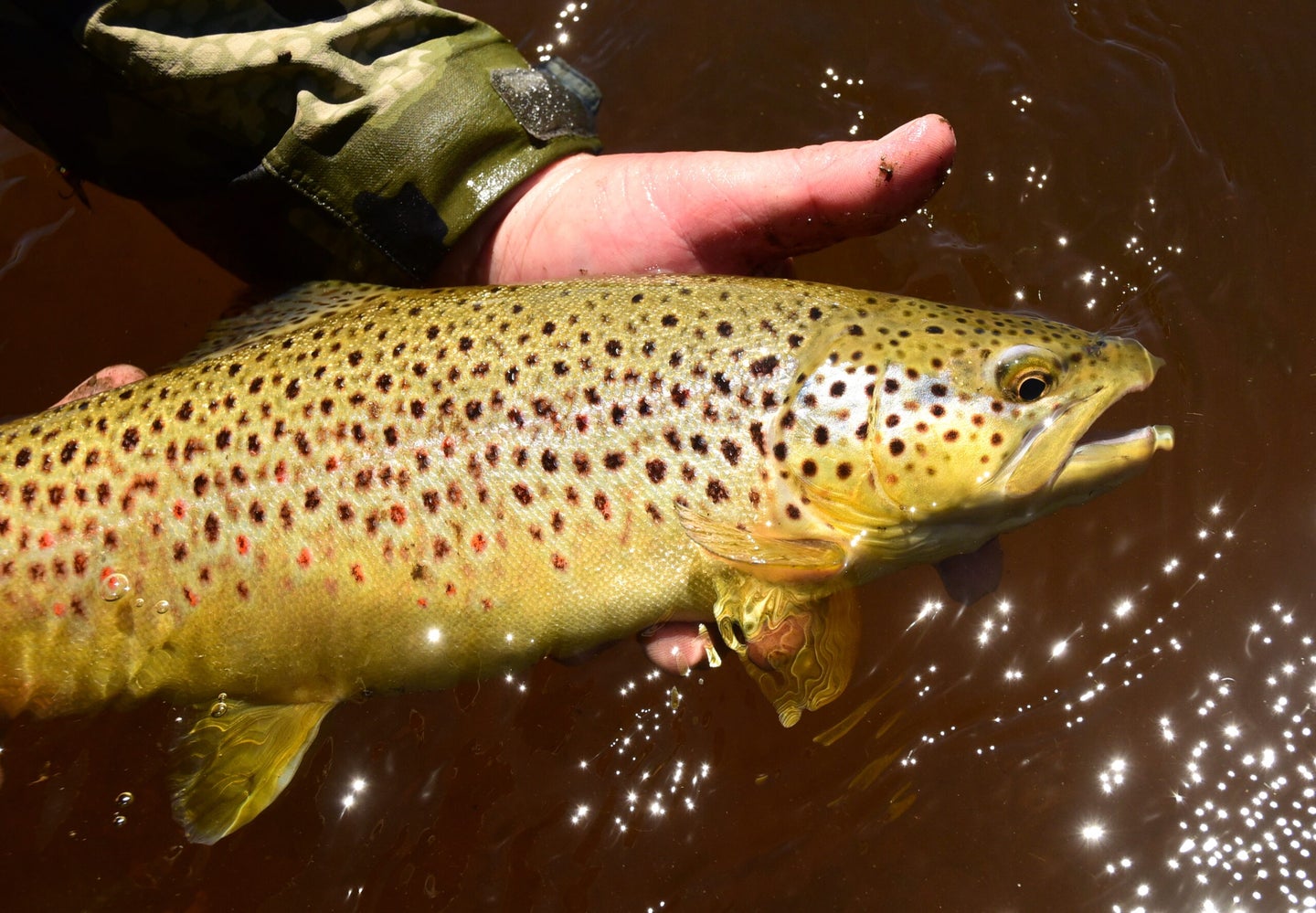 As hot temps continue to stress Western trout fisheries, the big fish that anglers have come to expect will likely become a thing of the past. USFWS
SHARE

By mid-July this summer, laminated signs attached to caution cones lined the Yampa River throughout Steamboat Springs, Colorado, declaring: “ALL RIVER USERS ARE ASKED TO REFRAIN FROM ENTERING THE YAMPA RIVER UNTIL FURTHER NOTICE.”

Flows were 20 percent of normal. Water temperatures approached 80 degrees during the day. A river usually full of people bobbing on float tubes, paddling on standup boards, or casting lines to fish holding in deep, clear pools was void of human activity.

The Yampa River, which winds about 250 miles from the Flat Top Mountains through Steamboat Springs, and into lower elevations was not alone this summer. Rivers across the West were closed for much of the summer—by mandate or as volunteer restrictions—in a desperate attempt by water managers to keep fish alive. These closures made headlines during this summer of historic drought, but really, the issues trace farther back than a single fishing season.

“If you look at the last four years, it’s been very tough on trout,” says Bill Atkinson, aquatic biologist for Colorado Parks and Wildlife in Steamboat Springs. “We had about 3,200 trout per mile over 6 inches in my fall sampling on the Yampa River through Steamboat in 2015. In the fall of 2019, that was down to about 1,900 trout per mile.”

That’s a decrease of 40 percent. This year could be even worse, he says.

Anyone paying attention to news from the West this summer heard stories like these. We read about historic wildfires consuming towns, of salmon floating belly up, and of streams drying. But the root of the issue here isn’t about what happened in June, July, or August, and is still happening now. It’s about why hot water is so bad for cold-water species like trout and whitefish, and what could be done—if anything—to make the situation better.

Because if nothing changes, and the drought that’s been plaguing the western U.S. for 20 years continues, fisheries managers and anglers say this summer’s fishing restrictions on iconic rivers in the West will become the norm.

“We’re in a real seminal moment for fish,” says Kirk Deeter, editor and chief of Trout Unlimited media and editor of Angling Trade, who lives in Steamboat Springs and hasn’t fished the Yampa in the past two summers because of heat and drought.

“Somehow we need to figure out a way to work together. We have to find a roadmap for sustainable fishing, especially for trout fishing. It’s been a perfect storm with the effects of climate change, an influx of so many anglers and all the things we’ve talked about for years now. It’s all lined up, and the species cannot sustain it if we don’t get smarter.”

Trout, salmon, and whitefish evolved to prefer temperatures between the low 50s and low 60s. Water temperatures higher than 70 become dangerous. Water in the high 70s and 80s, especially for more than an afternoon and evening, can be lethal.

Lower, warmer water also fosters more vegetation to grow on stream bottoms. During the day, plants produce oxygen, but at night they absorb oxygen. That means trout are stressed from heat when rivers are warmest during the day, but then can’t recover as well at night when dissolved oxygen levels drop even more.

Maybe even more importantly, for every 10 degrees Celsius water increases, a trout’s metabolic rate roughly doubles, says Atkinson. That means from 50 degrees Fahrenheit to 68, a fish needs to eat even more.

“When you get into the high 70s, they’re quite uncomfortable,” Atkinson says. “In some ways, it’s analogous to people. When it’s extremely hot out, a lot of people’s appetite tends to diminish. You get 95- to 100-degree days, you want to find a cool spot and don’t feel like eating a whole lot.”

So instead of eating, they look for a cool spot to take refuge. But because water is low, those cool spots are more limited and often occupied by bigger fish. Fighting other fish takes energy and burns more calories. It also produces lactic acid.

“It’s like humans getting a leg cramp. You’re not getting enough oxygen, [like when] a runner or swimmer cramps up. You’re building up lactic acid in your muscles,” Atkinson says. “The same thing [happens] with fish. That’s when they build up lactic acid, and it can be lethal.”

Worse yet, lactic acid buildup requires high quantities of oxygen to eliminate. The result of all those factors means that fish spending several months of the year just laying low, trying to survive when they should be feeding and fattening up for winter.

Factor in an angler hooking a trout and fighting it through warm water for even a few minutes, and the fish may not stand a chance.

Hooking mortality can be as high as 68 percent in some species of fish. How many fish die depends heavily on bait type, hook type, and how long it takes to land the fish, when water temperatures reach the 70s, even the cleanest releases on barbless hooks can kill fish, Atkinson says.

A Future of Smaller—and Fewer—Fish

Will trout fishing go away in the summer in the West? No. Plenty of places will still offer opportunity. Tail waters below reservoirs where water temperatures stay more consistently cool like the famous Grey Reef section of the North Platte River in Wyoming and the Green River below Flaming Gorge Reservoir in Utah will provide healthy fish in the summer, even if they’re a bit more sluggish. High mountain streams at 10,000 or 11,000 feet will also stay cool enough to handle fishing pressure—at least for now.

If a fish’s energy goes to fighting hooks and staying alive, it’s not going to grow as much. If anglers on public stretches of the Yampa are used to catching 16-to 17-inch fish, those may well become 14-or 15-inch trout. (This excludes, of course, private waters stocked with bigger fish.)

“Over a long period with drought years, that’s the best you could expect in some systems,” Atkinson says. “When you start factoring in the incredible increase in anglers throughout the West, combined with tough environmental conditions, you can’t expect to have the same numbers of big fish people are used to. It’s not feasible.”

Read Next: Fishing Pressure Increased During COVID. Is That a Bad Thing for Gamefish Populations?

Rivers that are already marginally too warm to support trout and angling may well begin to permanently close portions of the summer, says Jon Ewert, an aquatic biologist in Colorado Parks and Wildlife’s Hot Sulphur Springs region.

In Montana, where many rivers faced at least a partial if not full closure on fishing this summer, fisheries officials will continue to decide the fate of fishing on each river each year, says Eileen Ryce, Montana Fish Wildlife and Parks’ chief of fisheries.

At some point, either regulations will limit fishing, Deeter says, or the fish themselves will force a change.

Can We Mitigate Further Trout Loss?

Voluntary or formal closures on rivers when they’re too hot or too low isn’t new. But, Ryce says, “This year was unprecedented.”

“We were putting them on earlier in the year than other years and there were more of them. We had some on rivers that we have never had to do before.”

The first step toward closing a river and protecting the fishery is to ask anglers to stop fishing from 2 p.m. to 6 a.m. the following morning. Montana calls this daily closure a “hoot owl” restriction, a throwback to when loggers stopped working in the early afternoon because of increased fire danger.

The next step is closing a river completely, either on a volunteer basis or a formal closure.

The city of Steamboat Springs itself sets rules for commercial users within the city limits. And the closure isn’t just for anglers, but all river users: boaters, paddlers, swimmers, and more.

Their advisory reads: “We hope by removing the additional stress associated with recreation, that we can sustain the river’s health through the current adverse conditions. We will continue to monitor the river flow, temperature and dissolved oxygen levels and will lift the voluntary restrictions when conditions improve.”

“When you have a sky full of smoke and wildfires burning around you, it should tell you something,” he says. “It doesn’t take much for people to look at what was going on in the river when it was 30 percent of average, and see it was not good.”

Land management agencies could plant more trees along banks where they once were. Shaded areas can be up to 45 degrees cooler than areas in the sun, according to the Environmental Protection Agency.

Researchers are working on ideas to restore river channels, such as allowing water to flow underground and seep in and out of banks, providing natural cooling. Lawmakers across the West are talking more and more about possible dam removals to keep water moving.

The Colorado Water Trust raised money to provide water out of a small Yampa reservoir to augment flows. The city of Steamboat and the Upper Yampa Water Conservancy District also contributed. But long term across the West, even that has its limitations. Wars are fought over water. More often than not, it’s the fish who lose the battle.

For Deeter, the answer on many of these rivers is to just stop fishing in the heat of the summer. Or perhaps go fishing but stop after catching one or two fish instead of 20 or 30. And ultimately, the climate might just decide for us.

“I am usually an optimist, but I don’t know, I really don’t know,” he says. “Fly fishing as an industry is a bull market. It boomed and now the fisheries themselves are entering a bear market. It’s boom on the commerce and participation side, but it’s a bear market for the fish themselves.”

There are plenty of Western towns that are built around summer flyfishing for trout and the tourism they attract. So what happens when summer access is limited on the most popular rivers, or when the fishing quality takes a dive? It’s impossible to know for sure how the western fishing industry—including guides, outfitters, and resorts—will adapt. One thing is clear, however: Anglers will not travel to a fly-fishing destination that doesn’t offer better fishing than they can get at home.

Deeter sees three possibilities. One: We figure out how to work together and, to some degree, convince each other to not spend hot days catching as many fish as possible. Two: The government increases regulation and temporarily closes fisheries that are increasingly prone to hot water and low flows during the summer. Or three: We let nature take its course.

“Letting the economics of everything take its course is a sad outcome,” he says. “If it gets to a point where the fishing is so bad no one wants to fish anymore, that’s a collective loss for the industry.”

Is that going to happen? Certainly not everywhere. And most fly fishing towns in the West have multiple options for fishing, though the more rivers that decline or are closed, the more pressure that puts on fisheries that still offer good fishing and aren’t too hot.

So maybe more summer anglers turn to either tailwaters that can handle the pressure, or to warm water species that thrive in hot weather. Fly fishing for carp is becoming more popular, even in Western fishing towns. Maybe guides and anglers will adapt to catching new fish.

Or maybe we decide to work together to improve habitat, slow climate change, and take care of the resources we share.