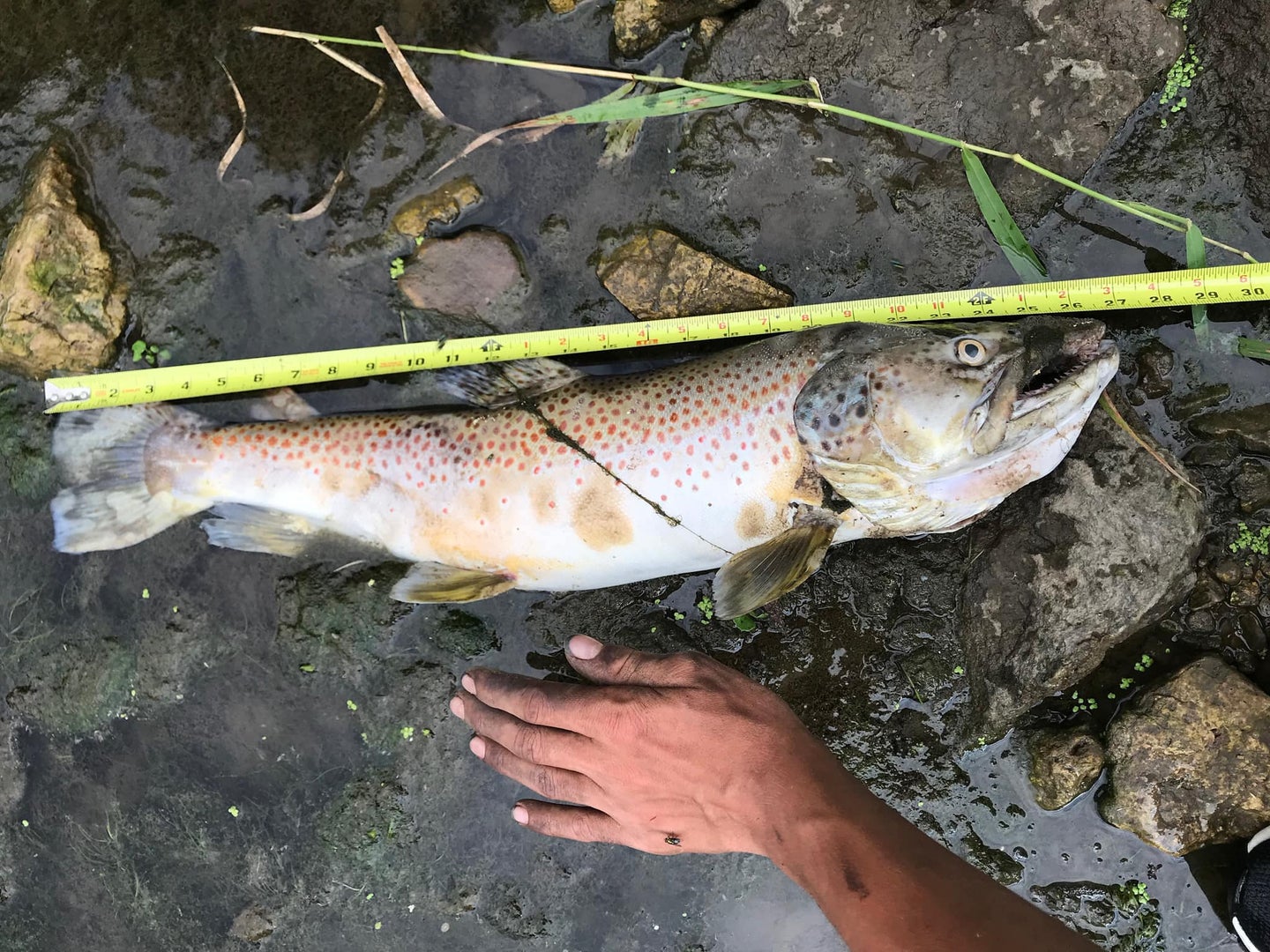 At least 2,500 fish were killed in the event, including this trophy-sized 27-inch brown trout. Minnesota Trout Unlimited / Facebook
SHARE

Authorities in southeast Minnesota are still investigating a fish kill that involved at least 2,500 fish in Rush Creek. The Minnesota Pollution Control Agency, the Department of Agriculture, and the Department of of Natural Resources launched an investigation into the die-off event last week. The cause is still unclear, but authorities (and some anglers) believe it was likely the result of fertilizer runoff from nearby farms.

“Field crews from the three agencies have collected fish and water samples and are analyzing results to help determine the cause of the fish kill,” MPCA spokesperson Mike Rafferty told Minnesota Public Radio last week.

Similar die-off events in the past have been linked to fertilizer and pesticide runoff after rain events. And as MPR pointed out, storms dropped heavy rain in southern Minnesota on July 23, which is around the same time the fish kill occurred.

The DNR explains on its website that it sees as many as 500 of these die-off events every year, most of which are attributed to natural causes such as warm water temperatures and low dissolved oxygen levels. Human-caused fish kills, on the other hand, are usually the result of toxic chemicals, fertilizers, pesticides, or some other pollutant spilling into a stream.

The agency notes that when a die-off event seems to affect only one species or size range, it’s usually the result of some disease or other natural cause. But when the die-off includes multiple species and size ranges, “human activity is more likely to be cause.”

The fish kill that took place in the upper end of Rush Creek on or around July 23 involved 75 percent brown trout. The rest were warm-water species such as suckers, according to the Rochester Post-Bulletin.

While Authorities Seek the Cause, Advocates Ask for Change

Rush Creek, located in Winona County, is one of the more well-known trout streams in the area. The DNR estimates a population size of between 65 and 230 trout per mile, and the state maintains these numbers by stocking up to 20,000 brown trout fingerlings annually.

But while next year’s stockings should help mitigate the losses, this hasn’t kept some advocates from speaking out. John Lenczewski, the executive director of the Minnesota chapter of Trout Unlimited, and Mark Reisetter, the vice chairman of the TU chapter, told reporters that many anglers are frustrated by these die-off events. Over the last five years, they’ve witnessed at least one trout kill per year in that corner of the state, including major die-off events on the South Branch of the Whitewater River in 2015 and in Garvin Brook in 2019.

Reisetter, who lives near Rush Creek, told the Post-Bulletin he could smell manure being spread in the days leading up to the July 23 rainstorm. He also noted that some of the dead fish were found up in the grass, signifying that they died when the river was higher.

MPCA spokesperson Lauren Lewandowski also confirmed on Tuesday that the fish kill was not a natural event.

“We may not be able to pinpoint [the cause] due to the nature of the river and flowing water,” she told the local news outlet. But she also brought up the heavy rain that occurred on July 23, saying “such rainfall events are known to result in contaminated runoff to streams and rivers.”

While the MPCA and other authorities look back to determine the cause of the fish kill, Lenczewski says he’s more concerned about the future. He wants regulators to make the necessary changes in order to protect Minnesota’s trout streams from pollution.

“What we want is to see something happen,” Lenczewski said. “If it’s a question of when manure application should take place, and the rules aren’t clear enough or need to create some cushion for timing, then let’s change those rules. If it’s pesticide or fungicide application rules, well, let’s change those rules so this doesn’t continue to happen.”