Video: Injured Deer Runs Inside Louisiana Hospital and Up the Escalator 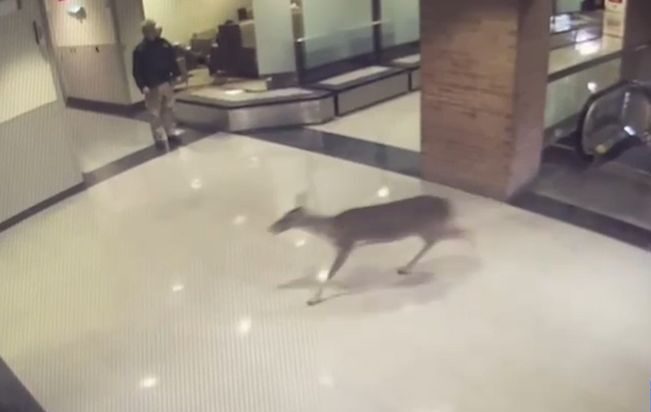 A wounded doe that had been struck by a car entered a Louisiana hospital Monday afternoon. YouTube
SHARE

Louisiana’s Department of Wildlife and Fisheries had to euthanize a whitetail doe after it charged into a Baton Rouge hospital Monday afternoon. The doe, which wildlife authorities think was struck by a car before it entered Our Lady of the Lake Hospital just after 2 p.m., stumbled its way through the front entrance and past surprised staff and visitors. The deer then ran up the wrong side of an escalator to the second floor.

A nurse and other volunteers were able to quickly pin the doe to the ground and cover its head with a sweatshirt to try to calm it.

“I looked to my right and saw the deer come flying through the doors,” the nurse who helped subdue the doe told WBZR 2 News. “[She] was sliding across the floor. It was slick.”

LDWF sedated the doe and removed the deer on a hospital bed before 3 p.m. and loaded it into the back of a truck. They later determined the deer was likely hit by a car on nearby Essen Lane before entering the hospital. WBZR reported that a driver saw a bloody deer in the median of Essen Lane and that another witness saw the deer bleeding and struggling to walk.

Read Next: What All Hunters Need to Know About Coronavirus in Whitetails

Due to its injuries, LDWF had to put down the deer, which was determined to be 4.5 years old.

UPDATE: the 4.5-year-old female deer who ran through OLOL earlier today had to be euthanized per LDWF.

LDWF’s vet just told me they believe she had been hit by a car on/near Essen Lane. A motorist called and said they saw the bleeding deer in the median before it entered OLOL

“We can confirm that around 2:15 p.m. today a small deer entered the main hospital entrance and up the escalators where it was captured by a law enforcement officer and several team members,” the hospital said in a statement. “The Louisiana Wildlife and Fisheries Department responded promptly helping to remove the animal. Patient care has not been interrupted and the area is being thoroughly sanitized. While most unusual in any busy regional medical center, we assume the deer may have wandered in from nearby Ward’s Creek.”