The conditions were hardly ideal. A drizzly rain, depressingly gray skies, and nearly no breeze to break up the surface.... 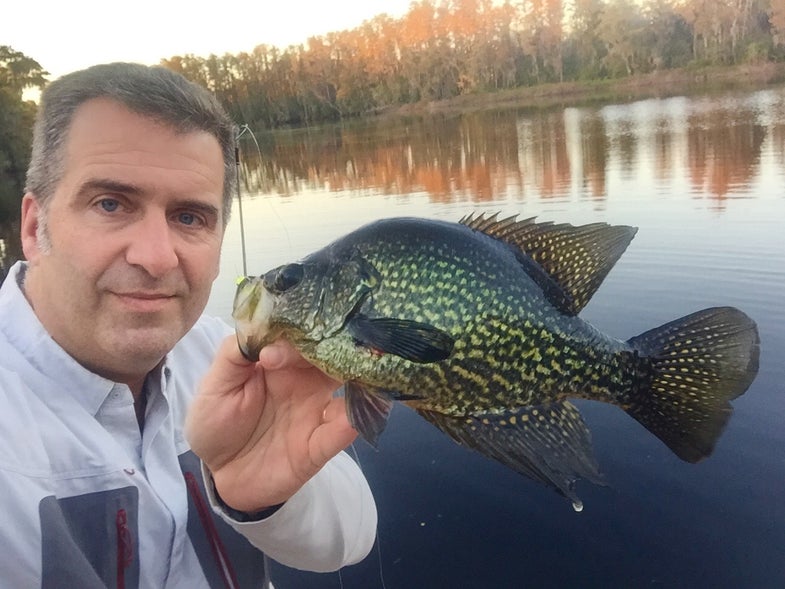 The conditions were hardly ideal. A drizzly rain, depressingly gray skies, and nearly no breeze to break up the surface. But honoring my request for crappie photos, Mark Williams and Doug Cherry set a course for some of their favorite Kentucky Lake brush piles.

There, the tenured tournament teammates would eventually bend the rods and offer a handful of pointers on doing so during the blah days of late fall.

GO WITH THE FLOW:

Williams likes to swing upwind or upcurrent of his spot and drift his baits across the cover to mimic the natural appearance of approaching baitfish.

Aggressive crappies will hold above or around the brush in clear feeding positions, but when he marks few fish on a typically productive brush pile, Williams will drop his jig right through the branches to make bottom impact. Often, this triggers a fish to bite what looks like an easy meal running for cover.

Tipping crappie jigs with Berkley PowerBait Crappie Nibbles encourages the fish to hold on long enough for anglers to detect the typically light bite that accompanies dreary days. Add a few rain drops to the equation and making the scented nuggets stick becomes increasingly difficult. Williams avoids the frustration with a clever preparation the night before his trip. He’ll spread a day’s worth of Crappie Nibbles on paper towels or newspaper and covers them with the same for a couple of hours.

When waiting for bites, Williams holds the rod in his right hand and lightly grips the line with his left thumb and forefinger. Similarly, Cherry tucks his line under the middle finger of his rod hand and holds it against the fore grip. As Cherry explains, dreary days put crappie in such a funk you may never feel a bite — just a little tightening the tells you it’s time to set the hook.